Farms give way to parks
The sky shrinks, the vistas close
Enter the cities.

Awakening in Tobermory, we scraped all our things back into their bags and loaded the bike, then sat down to enjoy a delightful breakfast cooked by a women who was obviously the mother of the man who checked us in yesterday, including fresh homemade spanakopita and bread. A quick stop at the grocery store netted us some snacks for the hike we’ve planned today.

We confusedly drove around Tobermory for a few minutes, then finally managed to find our way out to the Bruce Peninsula National Park/Fathom Five National Park Visitors’ Centre (notice the “re” on that, ha!). It was not the only time we’d be lost today. In any case, we paid up for some passes and hopped on the Burnt Point Trail, a side trail of the Bruce (the giant 900km trail that runs all down the Niagara Escarpment from the tip of the Bruce Peninsula to Niagara Falls). 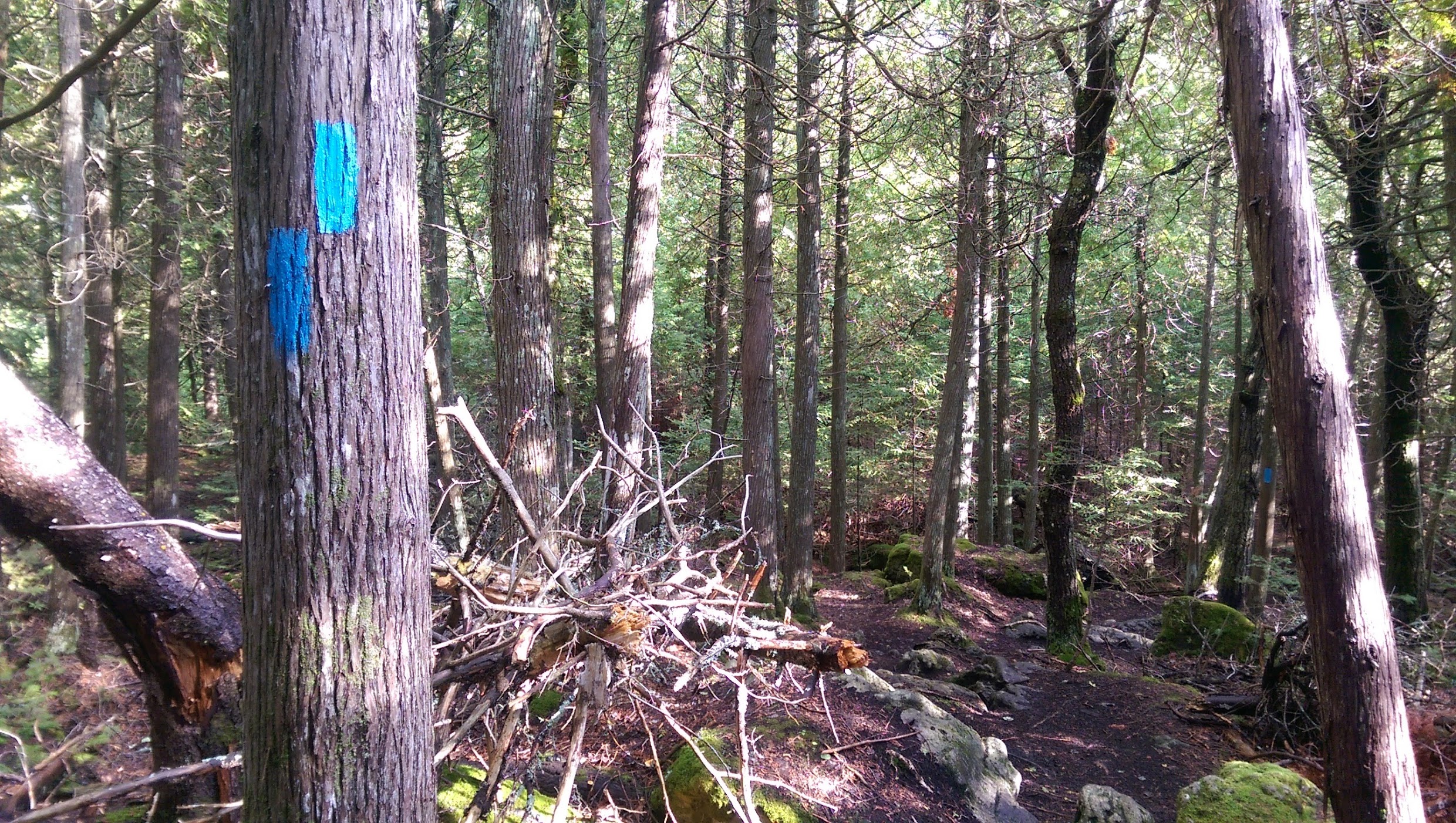 The Bruce is demarcated by blazes painted onto trees. A single blaze means go straight. A pair of blazes indicates a turn, in the direction of the one that is higher than the other. White blazes indicate the main Bruce Trail, while blue ones denote side trails. 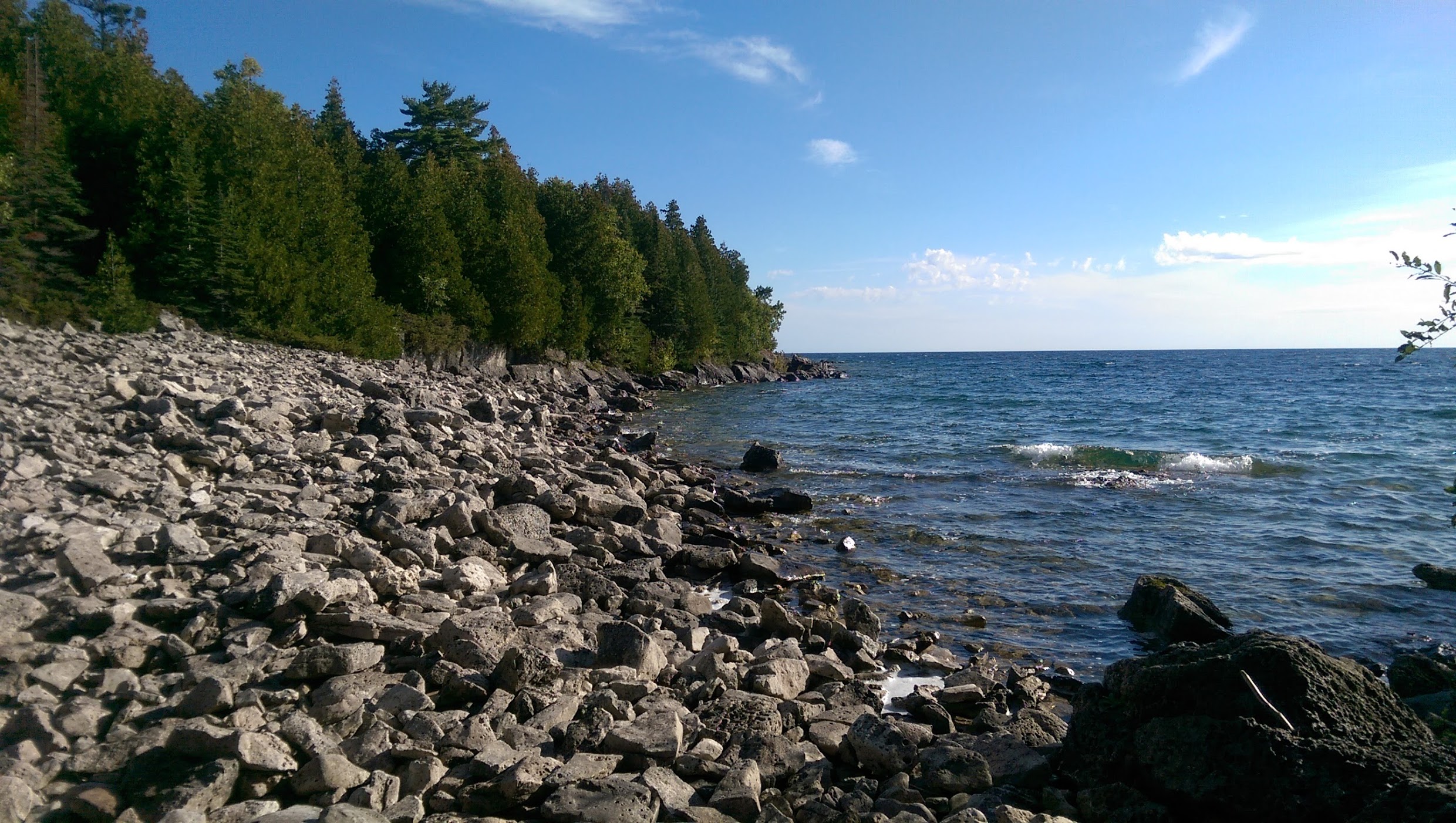 The hike was lovely, bringing us through a couple different types of forest and out to the rocky coast. We saw several amazing vistas, as well as some excellent places for relaxing. 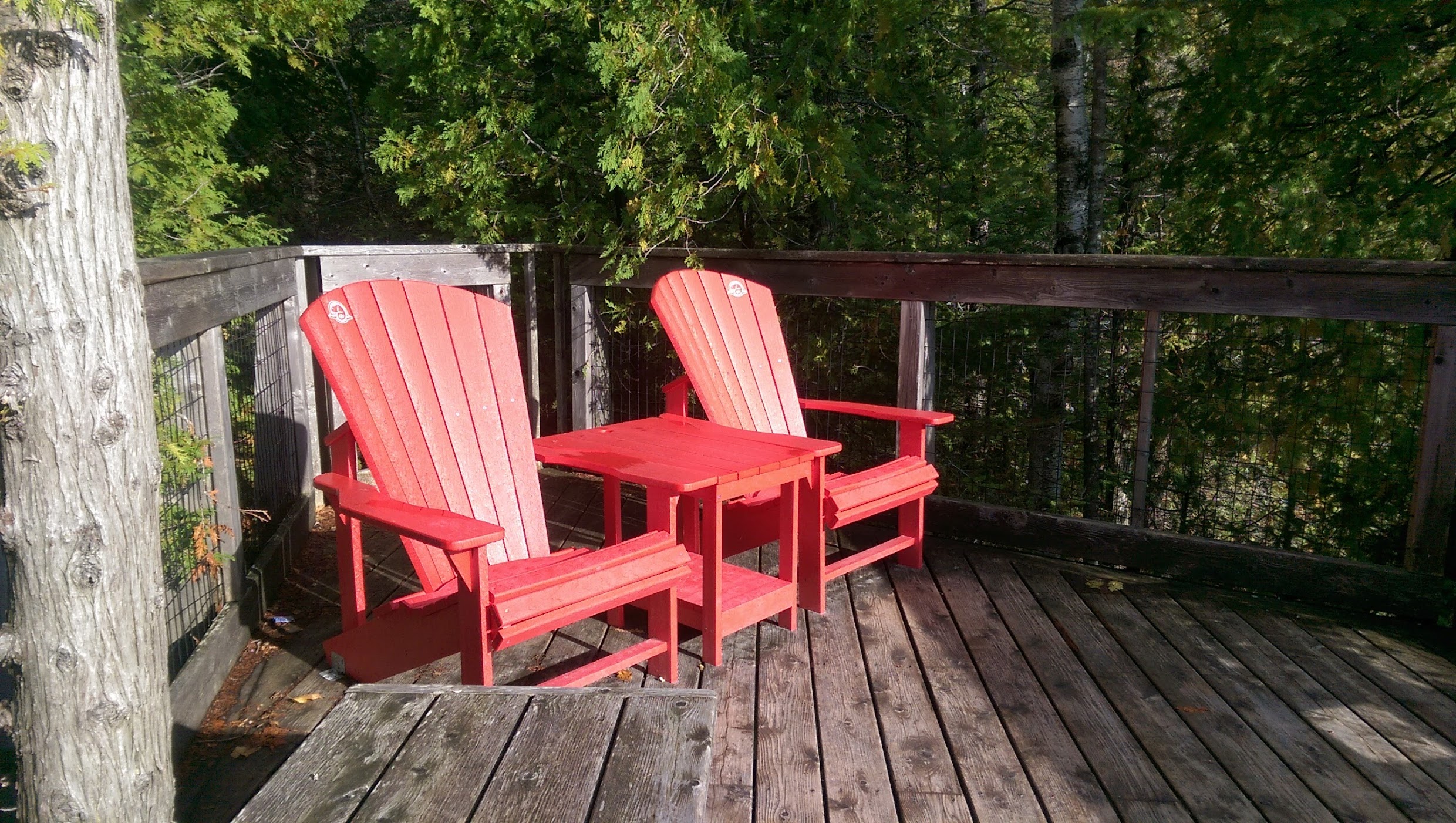 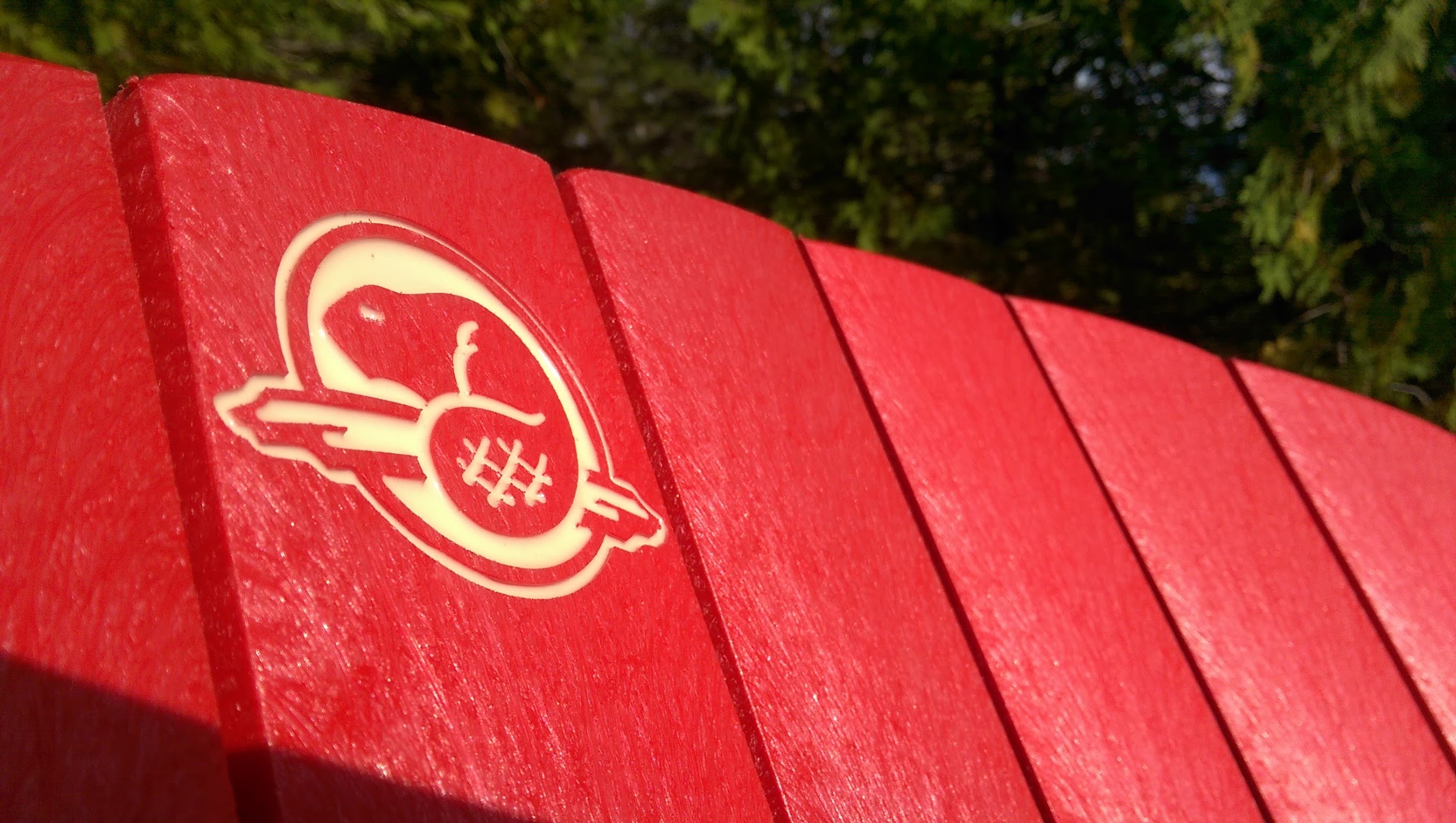 At the end of the hike, we climbed up the lookout tower to admire the view, then swung back to the centre where we watched a video (which is copyrighted, hello, “Her Majesty the Queen in Right of Canada”; what happens if Canada ever declares independence? Will the Queen retain copyright over its National Park videos??) about the park, which was extremely Canadian. It followed a park ranger as he explored all the different things around, like the shores, the trees, the caves, and the shipwrecks under the lake. It was actually pretty informative.

We also tromped around the exhibits in the centre, which we spent some time giggling at. There was an exhibit describing the area’s “ecosystem stew”, and how many different ingredients were required to make something that worked well. There was also one showing underwater footage of shipwrecks and the like that had 3D elements. Why? 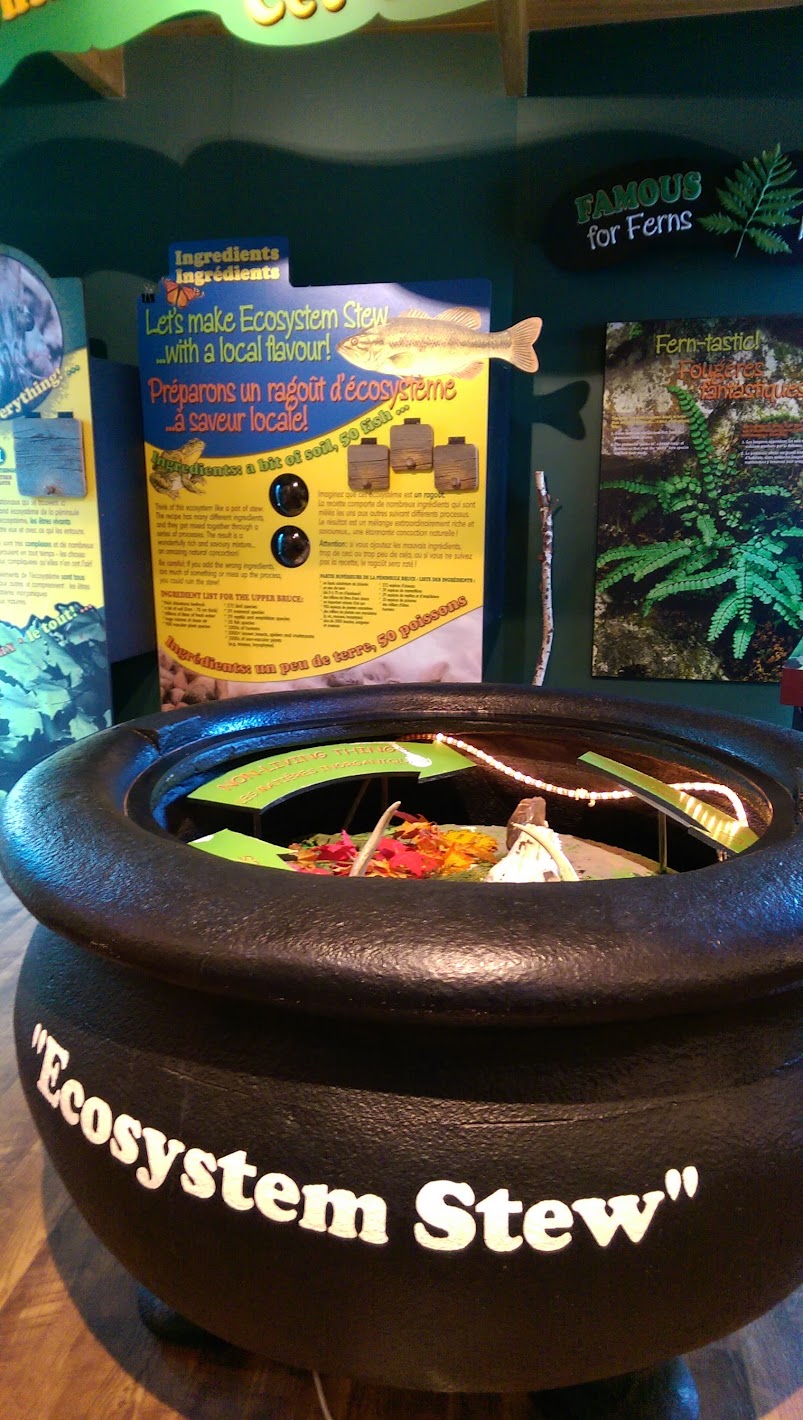 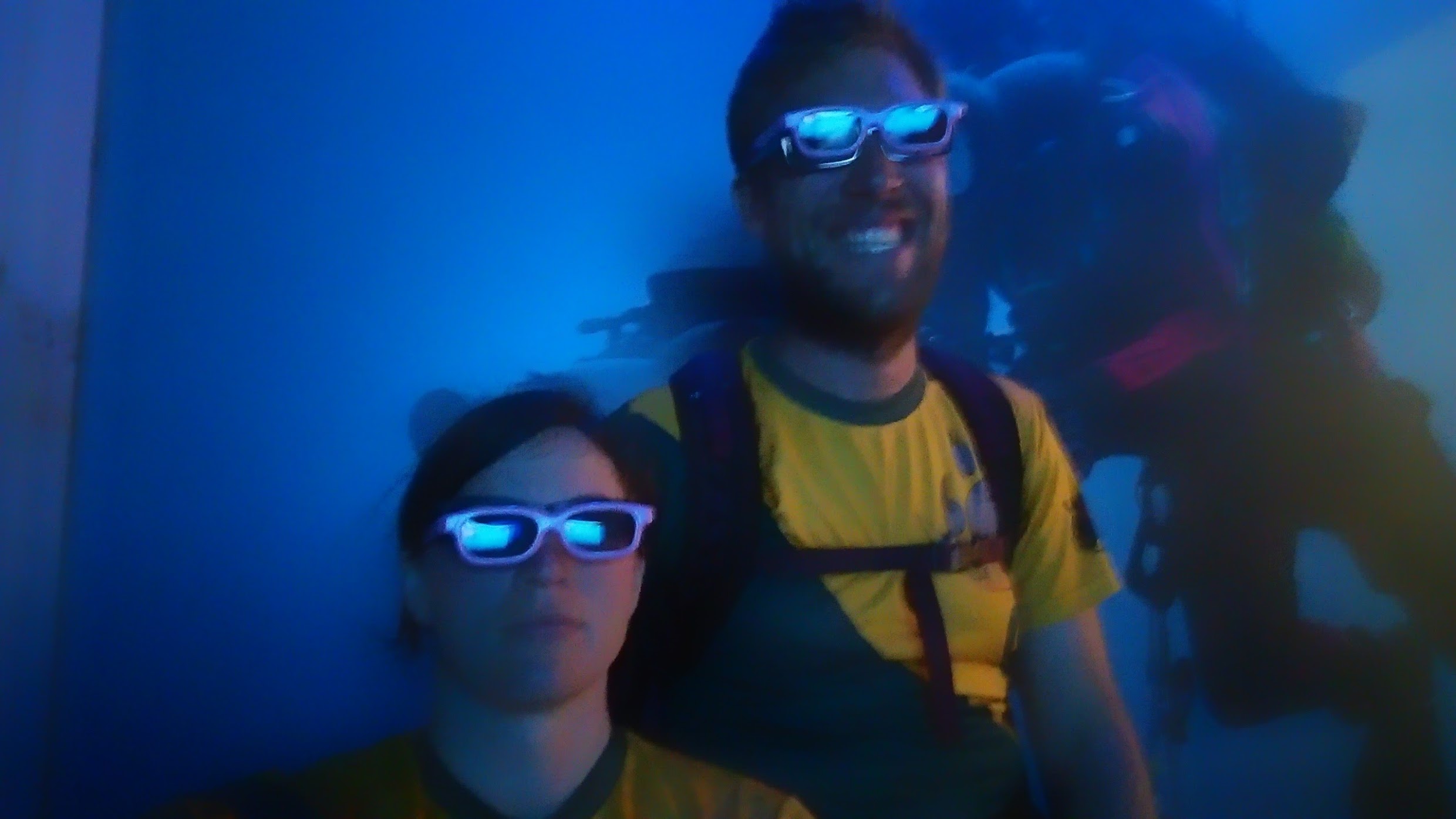 We rolled out and down the road. It was a confusing day for navigation, as we discovered two different highway 10s in the area, one of which headed southeast and one of which headed southwest. We accidentally took the one when we meant to take the other, then had a few detours to contend with, but finally, eventually, made it to Waterloo, after passing over Ontario’s only covered bridge (a.k.a., “the kissing bridge”?); eating a delicious lunch of quiche, soup, shepherd’s pie, and regular pie; and paying a visit to Wiarton Willie (Canada’s ripoff of Punxsutawney Phil, Wiarton Willie is also a groundhog who also comes out February 2nd to also predict the weather of the next 6 weeks). 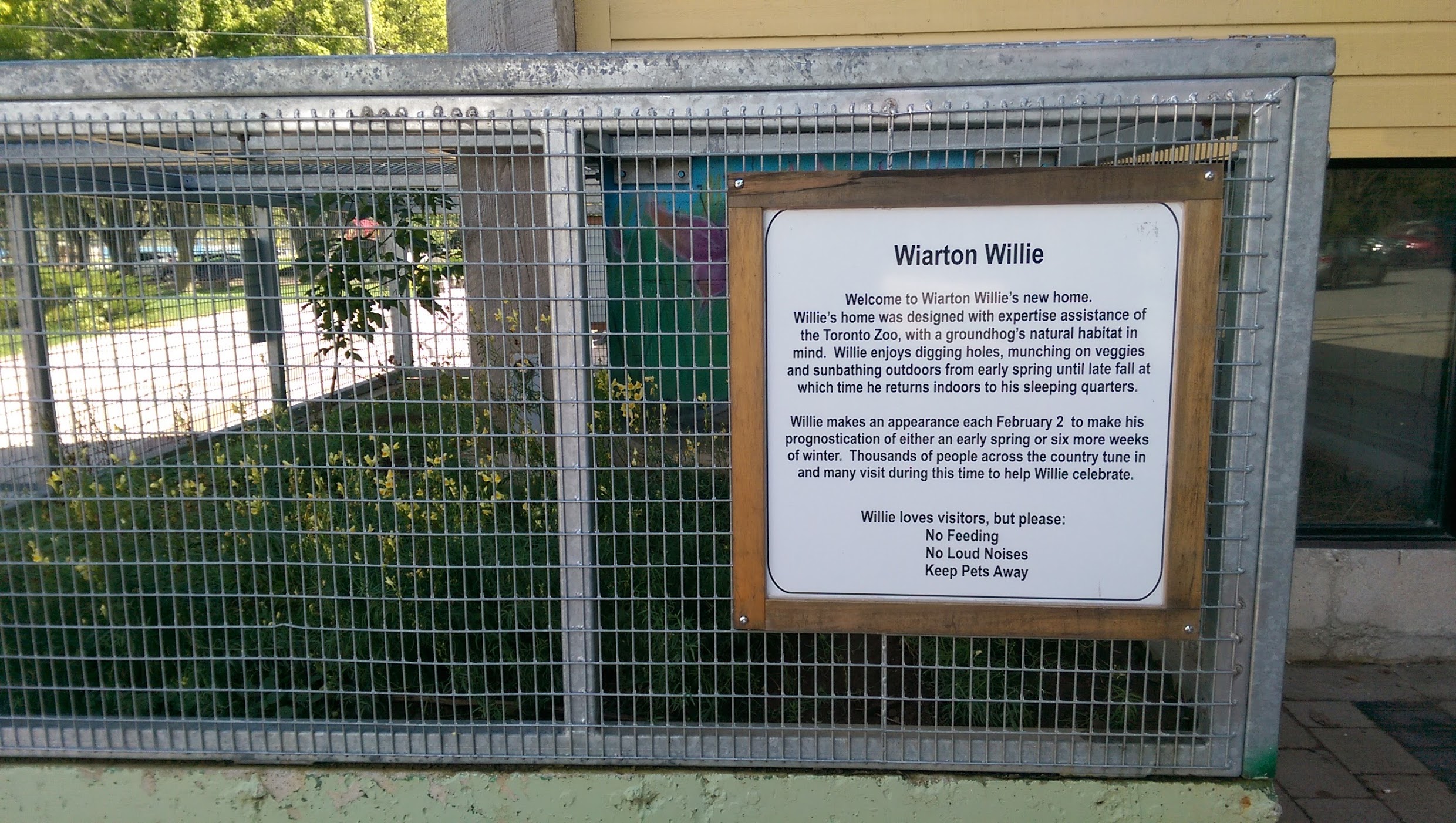 Our host in Waterloo, Jeff, wasn’t home when we arrived, so Evan attempted to navigate us through downtown to a grocery store he remembered shopping at when he was a student in the area. This was complicated by the fact that half of downtown is closed due to light rail (LRT) construction. It’ll be great for the region to have the LRT in, as it will connect Waterloo, Kitchener, and Cambridge, but for now it makes getting anywhere a huge headache.

We cooked up some roasted vegetables and mulled some apple cider. Jeff came back from his evening out, and we got to spend some time chatting with him. He’s lived in the area all his life, but he’d have been equally at home in Berkeley. He cares about good organic food, he’s a yoga teacher, he bikes everywhere, etc., etc.

All three of us were ready to turn in early, him especially since his first yoga class tomorrow is at 6am. Evan and I stayed up to watch a video from GDC (the Game Developers’ Conference) about storytelling, which got us interested in trying out a game called “Fahrenheit” or “Indigo Prophecy”. We’ll see if we can find it sometime soon.