The Emp flies northwest
As orange spills from treetops
We dream to ourselves. 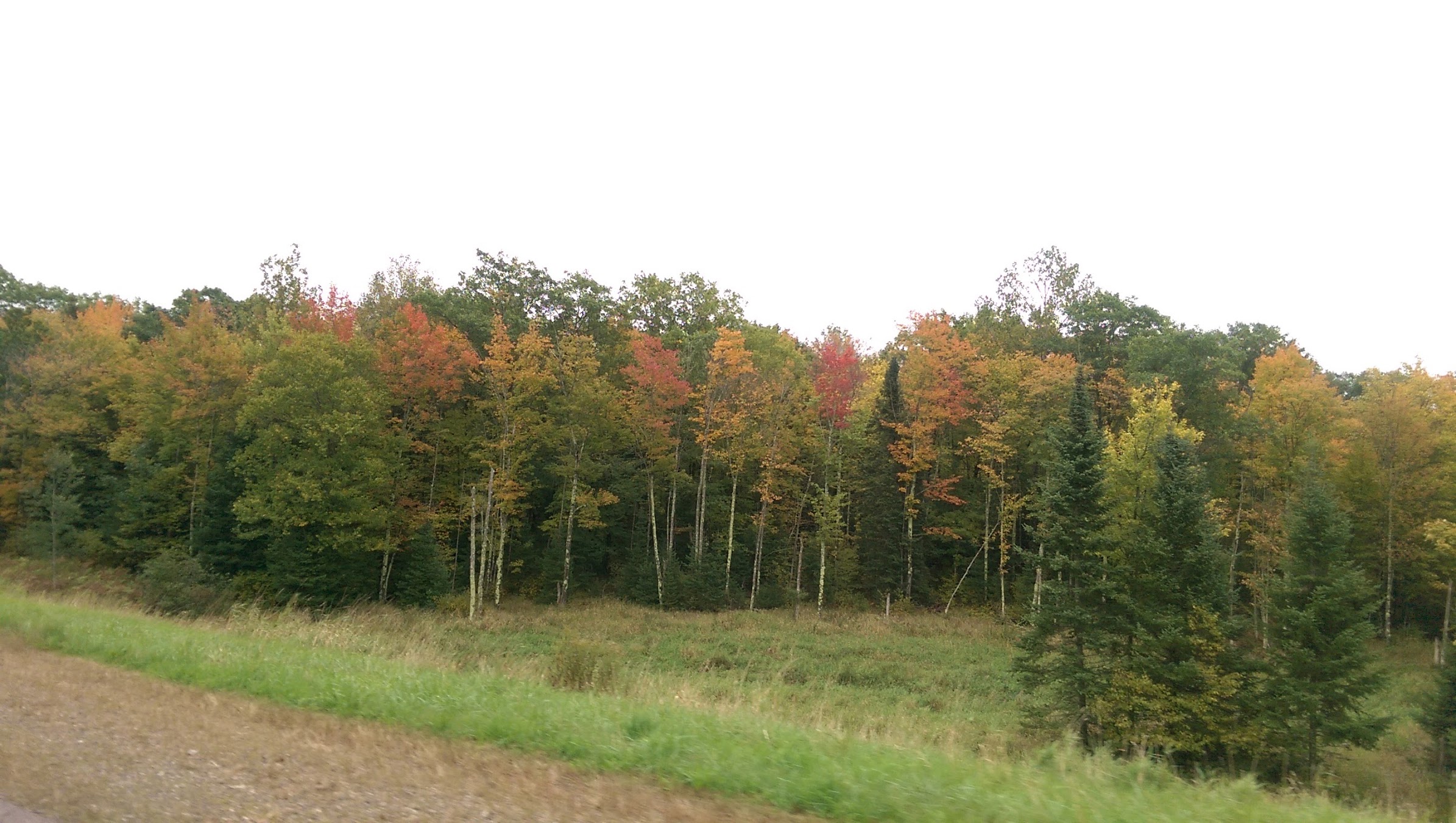 The hostel has no-nonsense checkout time: 9am. We set an alarm for maybe the first time on the trip and woke up at 7 to get packed and out in time. This is partially due to the weather forecasts we were seeing: the Twin Cities are expecting thunderstorms all day… starting around 10am. We figured we could get ourselves out of the storms’ range if only we could get moving quickly enough in the morning.

We enjoyed our second Wisconsin cheese with breakfast: orange rind. OM NOM NOM CAN’T WAIT UNTIL WE GET TO AMERICA’S DAIRYLAND.

Anyway, we did manage to get out of town quickly enough to avoid the prophesied downpour. We’ve been able to stay unreasonably dry so far on this trip..? With our crossing of the Mississippi, we are truly into the EAST. Here, people drink soda instead of pop. Here, the radio station call letters start with W instead of K. This is the east.

We cut up along the St. Croix river on the Minnesota side for a while this morning, and we were shocked to come across the Franconia Sculpture Park, a multi-dozen-acre park filled with big art. 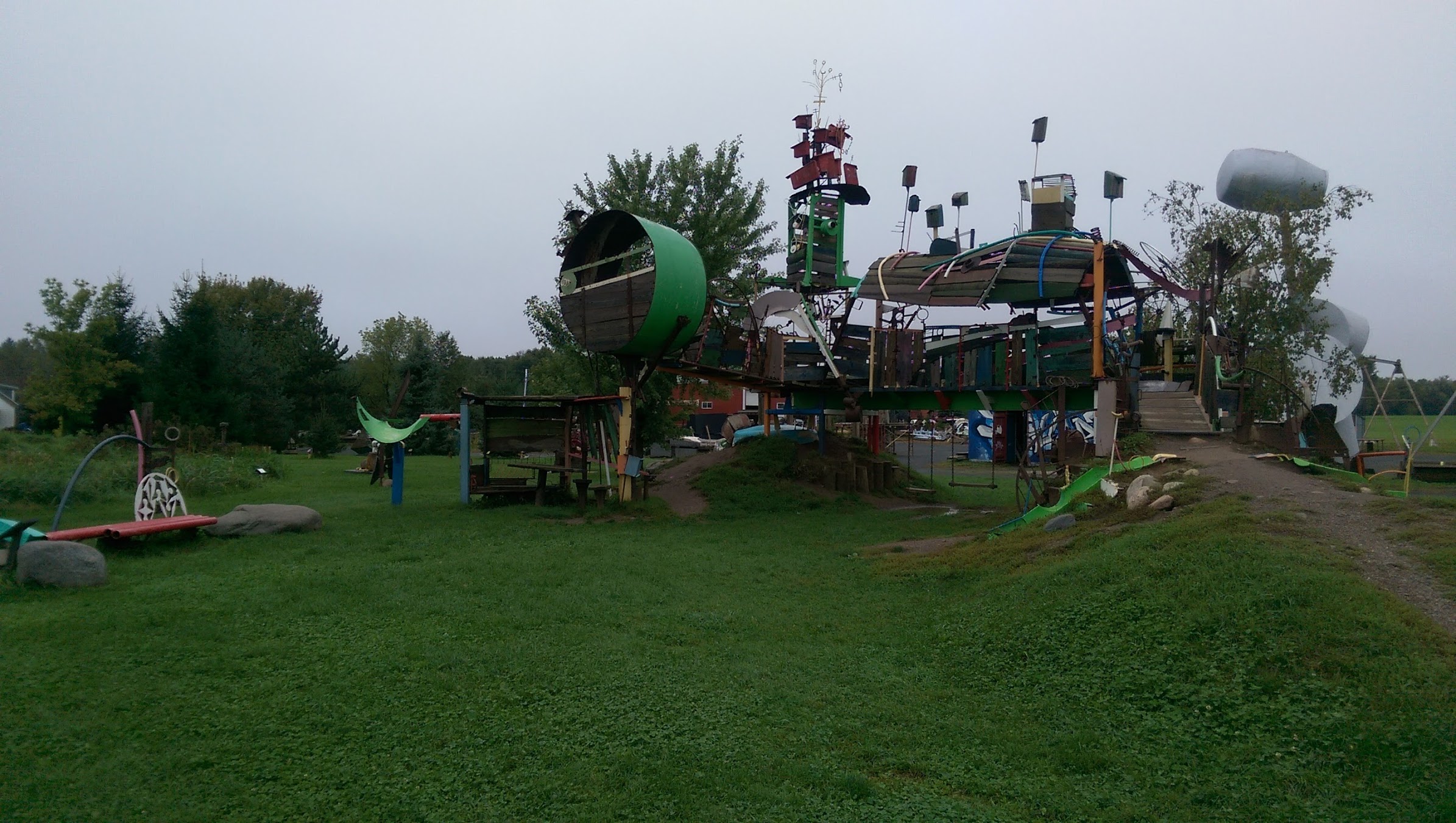 We speculated that this is something we’d only expect to see in the Bay Area, as it smacked of Burning Man, but in reality it would never work in the SFBA because land is too expensive. There was some pretty cool stuff showcased, though, like the “cast iron performance art” piece about the North Star and the Big Dipper (the performance piece was in casting; a crew all cast their iron stars in formation at once). 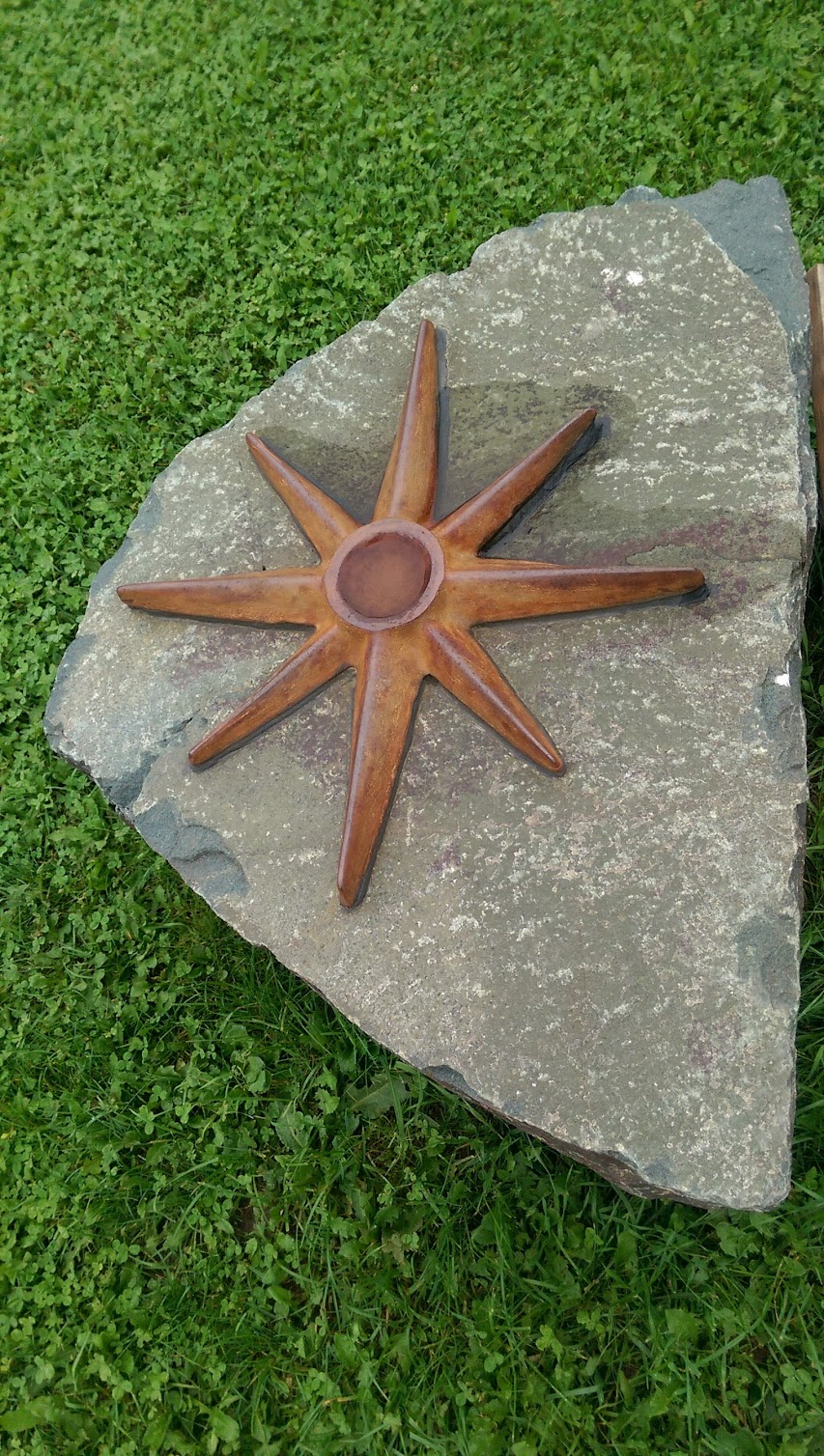 We passed into Wisconsin. At roughly this time, fall officially started. Fall always brings a sort of melancholy and thoughtful quiet feeling after summer’s abundance, and I was trying to think of songs that fit with my feelings of fall (I’m actually pretty partial to feeling melancholy once in a while). The best ones I’ve come up with so far are three:

Your mileage may vary. We started out this trip with a pair of Chatterbox Bluetooth helmet radios that my sister had gotten for us as a gift a few years ago, but for some reason they refused to pair. We gave up trying to get them to work and eventually packed them up and shipped them to my parents’ house. This means that our conversations with each other are pretty limited; we’ve developed some sign language about weather and scenery (mainly to signal rain, nice sunshine, especially nice vistas, etc.), but other communication on the bike is limited to pretty simple ideas that can be communicated in a few shouted words. We also don’t have much exposure to music on the road, mostly just what we hear in cafés or restaurants. That means there’s a lot of time to play songs in our head that we already know (at which point we sometimes realize that we don’t really know them that well), or to get lost in the meditative sights of nature speeding by. Out here in Wisconsin, the trees are really beginning to blaze with fall colors. I also spend some of my riding time making up songs, which will probably never become famous. One of the ones I remember is from back in Eastern Oregon:

We’re stacking up the haybales four bales high,
Bringin’ all the cattle in, seven at night,
We’re chasin’ all the tumbleweeds out of the road,
Out here on the range.

And one from more recently:

The wind whistles harsh as it passes the cornfields,
And it moans while caressing the trees.
While up in the sky is the home of the sunshine,
As the clouds, they whisper our dreams.

Like I said, unlikely to become famous. But this is what we do out on the road.

We had made a vague plan to stop just before hitting a patch of National Forest, and I’d synced a low-res map on Google Maps when we had a bit of signal in a relatively larger (1500 souls) town. This map showed the location of Shady Nook, a campground we decided we’d try out.

On the way to Shady Nook, we passed through a series of increasingly unlikely towns, with smaller and smaller grocery stores. This led to a slight panic, as we hadn’t gotten groceries for dinner yet. Eventually, we found what we figured was the last “reasonable” store we’d see. Evan rustled up some stuff for a pasta dinner, while I chatted with the store owner to see if she knew anything about the campground we were looking for. She didn’t, but she had a paper phone book (!) which she found the number in. She called on her phone (we didn’t have signal in that area), and I talked with the owner, a pleasant- and elderly-sounding guy. It’s a good thing we asked about the place, because when I asked him for directions to supplement my crappy map tile, he described a set of roads that was in almost completely the opposite direction from what Google was trying to tell me.

We followed his directions and eventually bumped over a washed-out gravel road into Shady Nook. The guy who ran it was a totally sweet old man, who didn’t even have a setup for taking credit cards. We plunked down some cash for a tent site and some firewood and went off to get set up. Our site is right on Lake Chippewa! 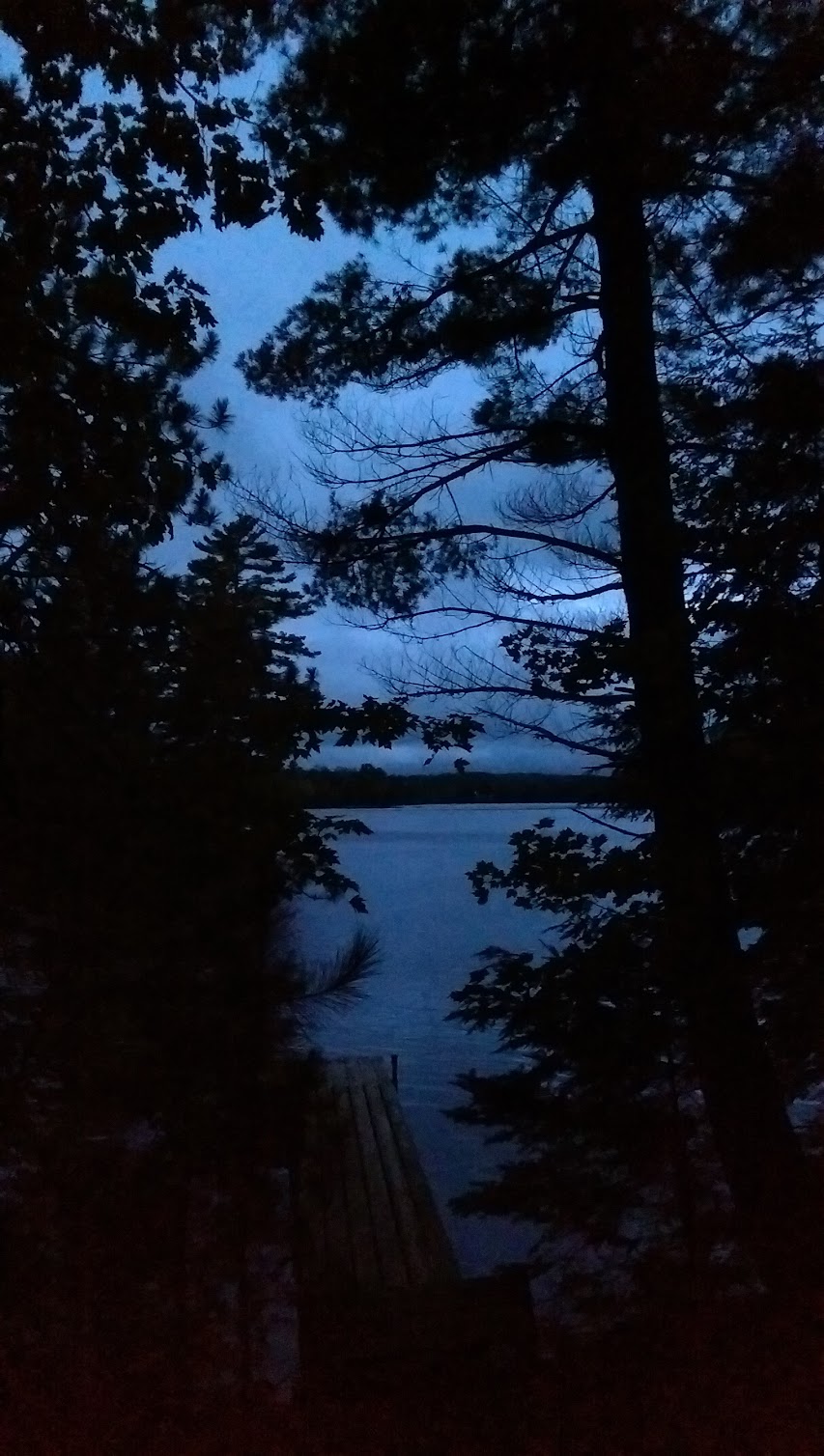 We actually have a dock that goes right off the site to the lake. We took a turn around the whole campground (on foot, since the road is treacherous enough that we would prefer to just drive it twice with The Emperor), and this is clearly a happening place in summertime. They have a tiki bar on the beach, canoes for rent, a water trampoline, a submerged basketball court, and more! One of the fellows staying in a cabin there told us that there’d been a flood event yesterday, so we’re lucky to be here today, instead. 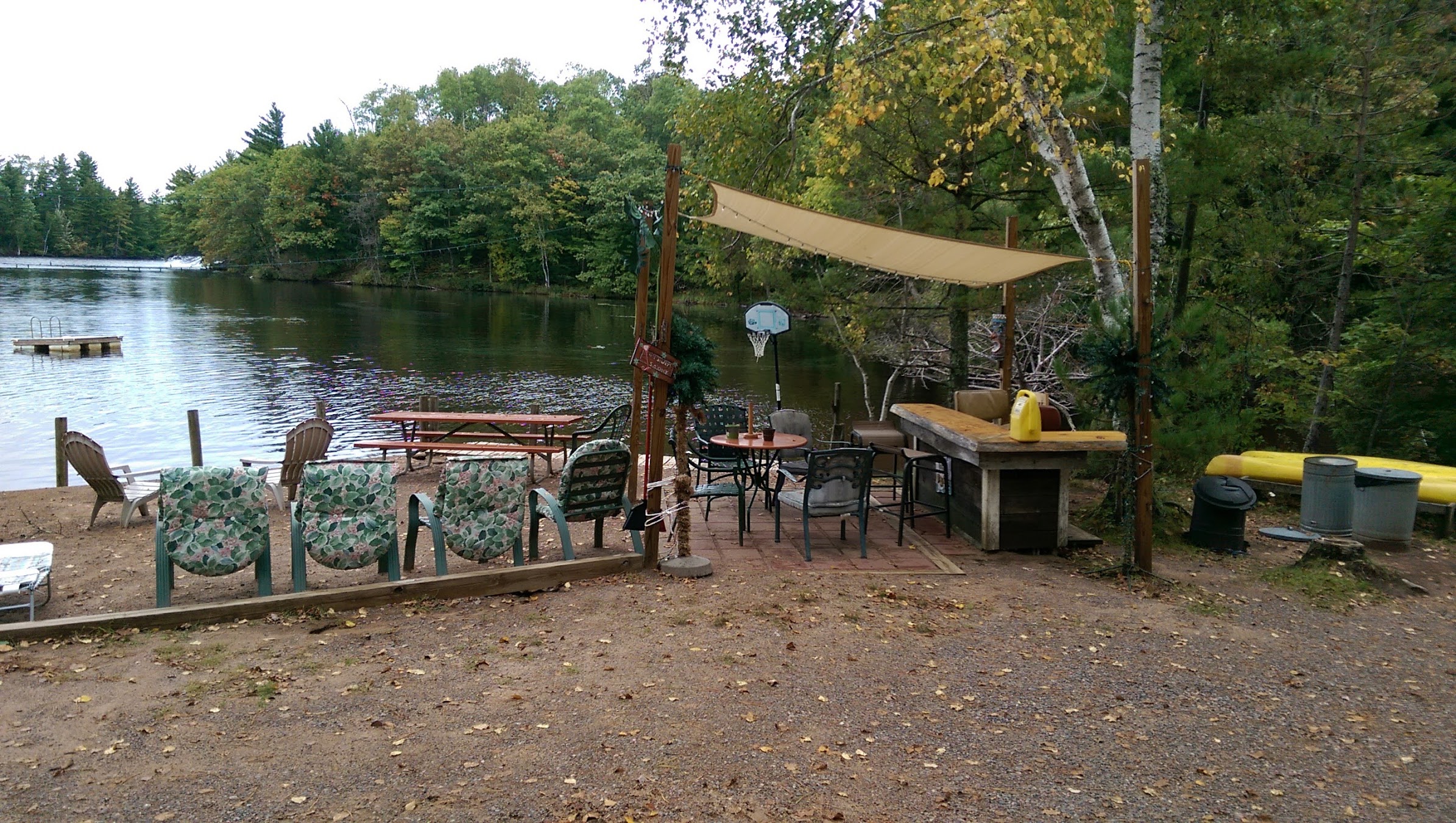 Back at the site, Evan fixed dinner while I set to work making a campfire. Due to the rainfall yesterday, all the wood we got was damp, all the kindling around the site was damp, and the fire pit itself was damp. I shredded all the paper and cardboard available and broke up little bits of twigs besides, but only succeeded in creating the Worst Campfire Ever. At one point, one of the larger logs caught, but only for a moment. The thing kept smoldering, and since everything is so wet we didn’t bother putting it out. We went and sat on the dock for a bit, drinking beer and planning tomorrow’s travel.

After dinner and beer, we walked up to the washroom block to brush our teeth and wash our dishes. When we returned, we were suitably surprised to see that the WCE had re-lit itself! Evidently the smoldering had boiled enough water out of a large log to finally light it. Excited, we tried adding such kindling as we could find to finally coax it into a roaring flame, but instead it died for real. We sighed and poured water on it, and finished off the night with our evening’s reading of Doc Savage (we’ve finished “The Dust of Death”, and now we’re into “The Mental Wizard”).