Corn! Its golden grains
Worth celebrating. Construct
A permanent ode.

Pierre conquered, we enjoyed a not-too-bad continental breakfast that actually included biscuits and gravy and rolled out. Our route took us along the Missouri River, winding through some gently rolling hills and eventually dropping us in Chamberlain around lunchtime. (We remarked that it’s a bit of a shame we didn’t push past Pierre yesterday, as this area is certainly more picturesque!)

At lunch, we got to try a regional specialty that I had never heard of: Sour Cream Raisin Pie. 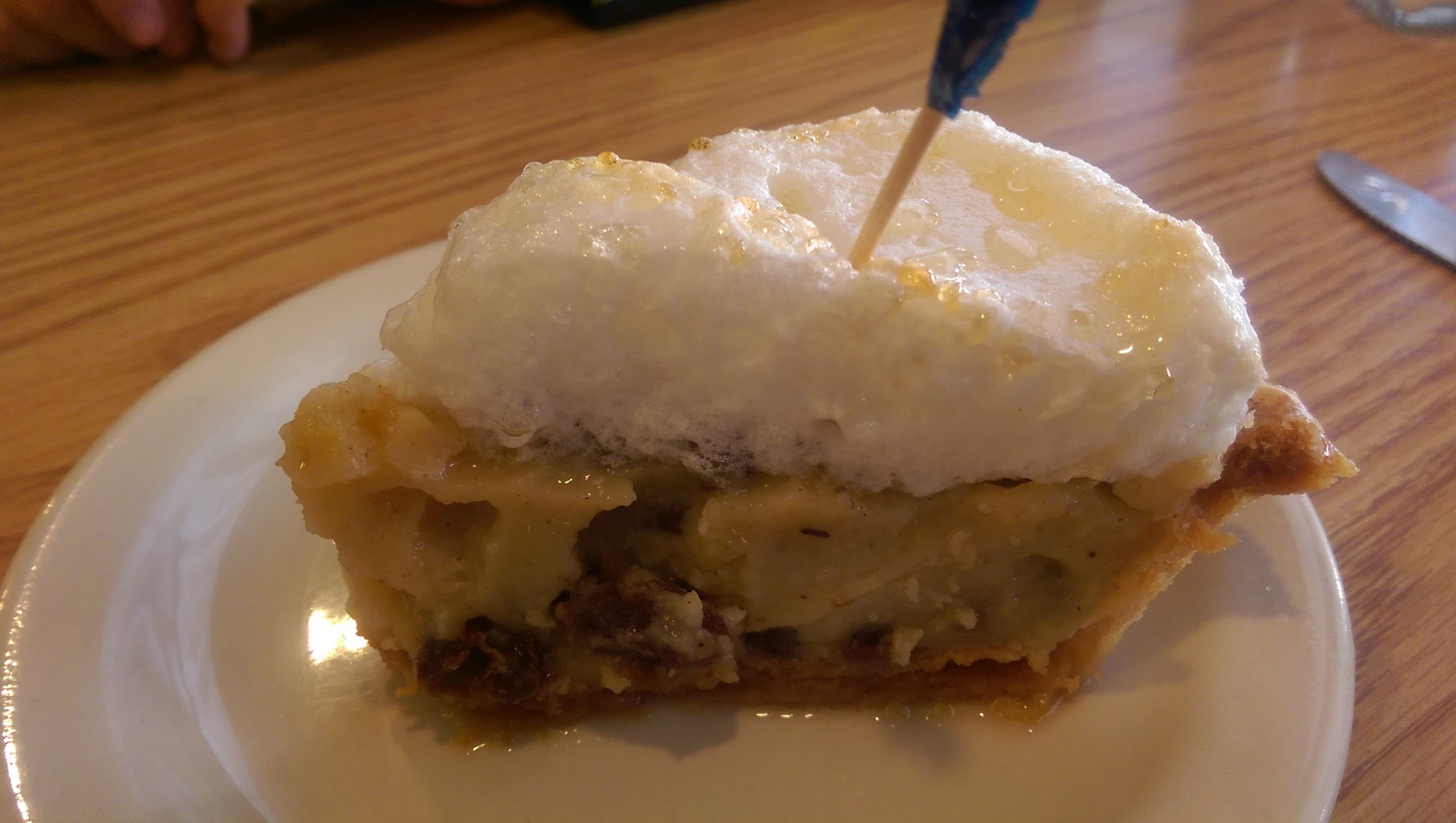 Yum! This meringue-covered pie is much tastier than it has a right to be, and must have grown out of Eastern European recipes. We’re going to have to try to make this once we get settled in a place with an oven.

Our goal in Chamberlain was to visit the Hall of Fame, which supposedly houses an interpretive center about the Lewis and Clark expedition—this information per the random woman who gave us tomatoes from her garden at the gas station yesterday. We unfortunately didn’t get to find out, as the center was closed. :(

The rest of the day’s route wound us across the freeway on both sides, through small towns that sometimes didn’t even have exits on the 90. We had a few close calls with wildlife, squirrels and deer (!), but got out ok. Seeing deer was encouraging, and as we drew closer to Mitchell we started seeing distinct changes in the type of grass and the amount of trees: the end of the Great Plains!

At long last, we achieved Mitchell. Our goal here was a visit to its renowned Corn Palace. 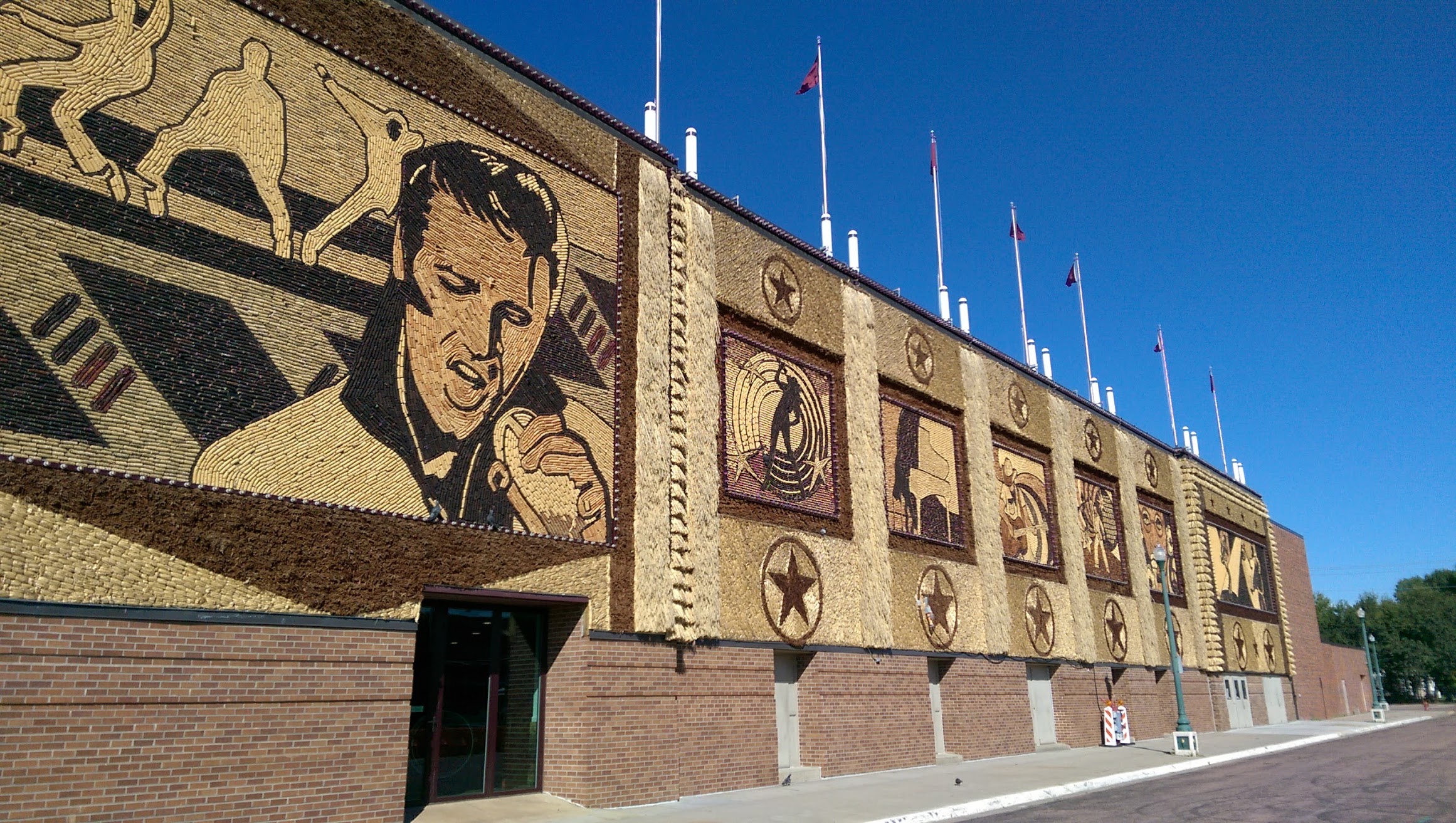 Each year the palace is redecorated with a new theme and panels, all done in corn. Yes, all that art is made of corn cobs. Apparently this palace comes out of an actually fairly popular “thing” from the late 19th century where people in America built palaces for different grains. It’s the only one left now, however.

We spent some time wandering around Mitchell, checking the scene. We were surprised, in this rather Christian and rural area, to find an incredibly amusing Trump likeness. 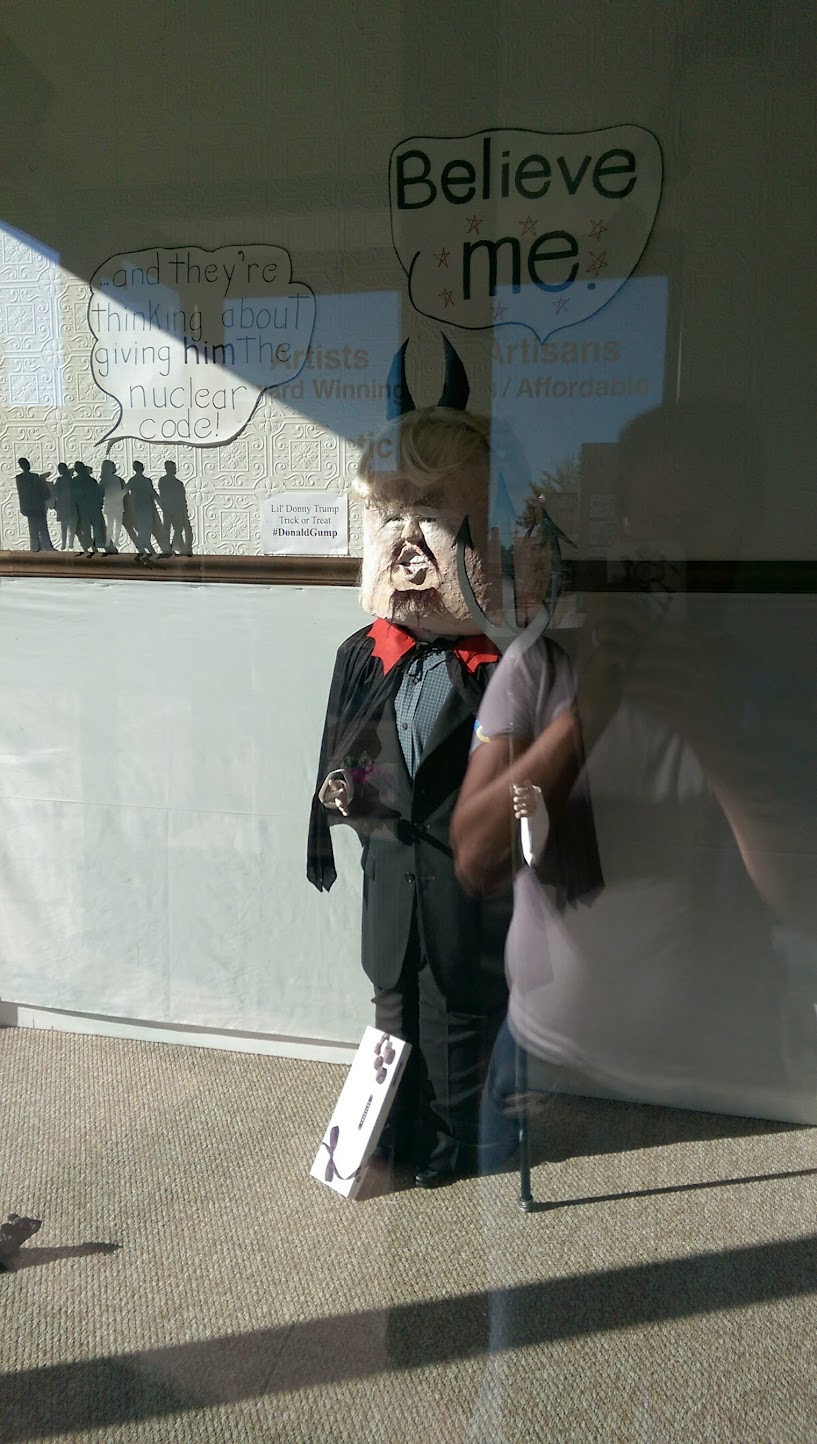 We camped at the Mitchell municipal campground (!) just north of the city on the lake (a constructed lake, dug by horse power). The guy who owned it was awesome. He initially gave us a pretty reasonable campsite right next to the office and all the facilities: the washroom, the playground, and all that. 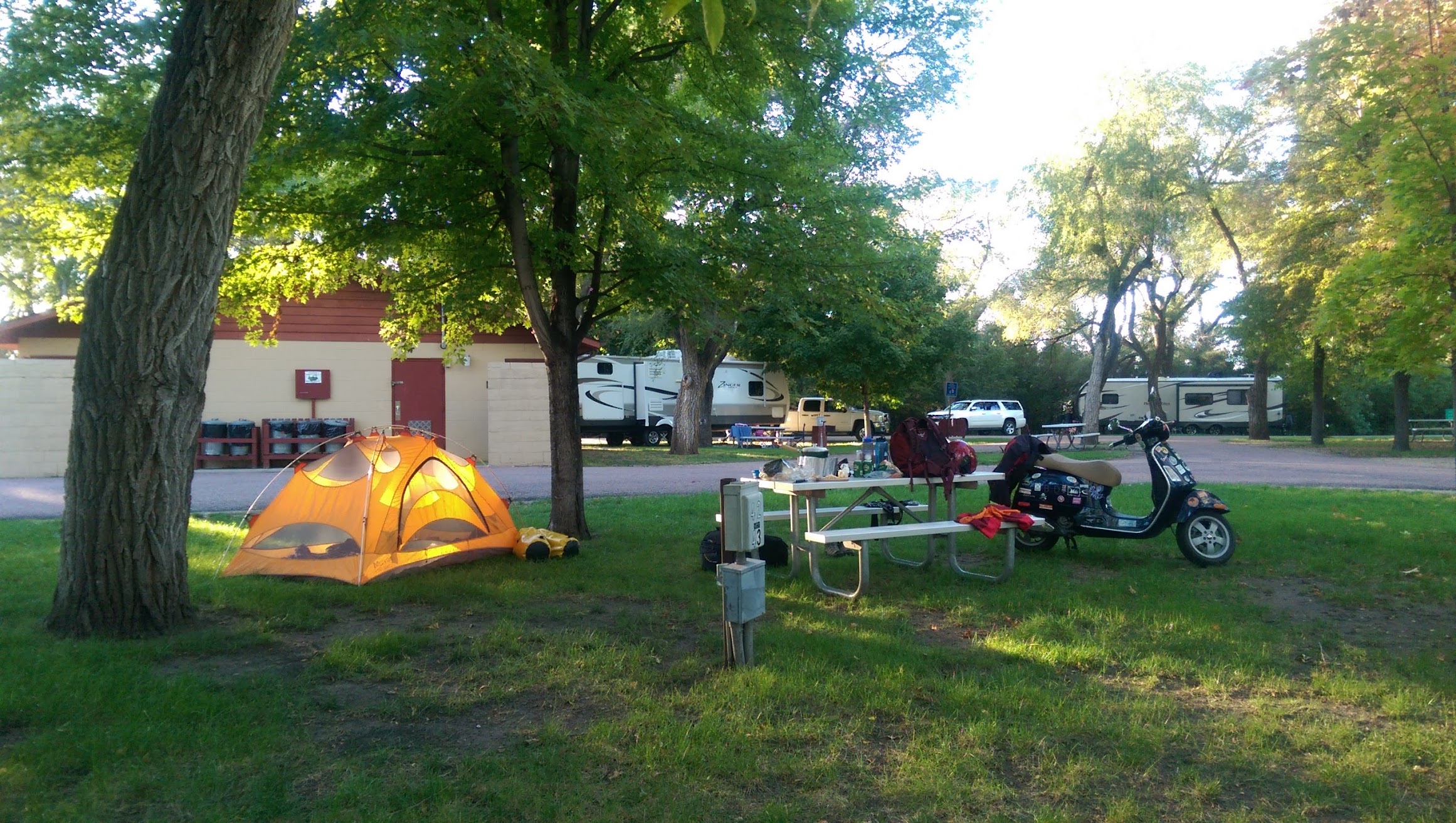 We later took a walk around the grounds just to check out the lake and whatnot, when we discovered a much more awesome and picturesque set of sites on the point. We asked if we could move, and not only did he not mind, but also he loaded our set-up tent into his pickup for transport, let us drive our other things over in his golf cart, and gave us a load of free firewood. My favorite scene from the evening was after we loaded a bunch of the firewood (scrap medium-sized branches and bark that he was planning to take to the dump, actually) into the fire pit, he came back with a can of gas and poured it all over the pit, then casually threw a match over his shoulder into it. As you might expect, it went WHOOSH. 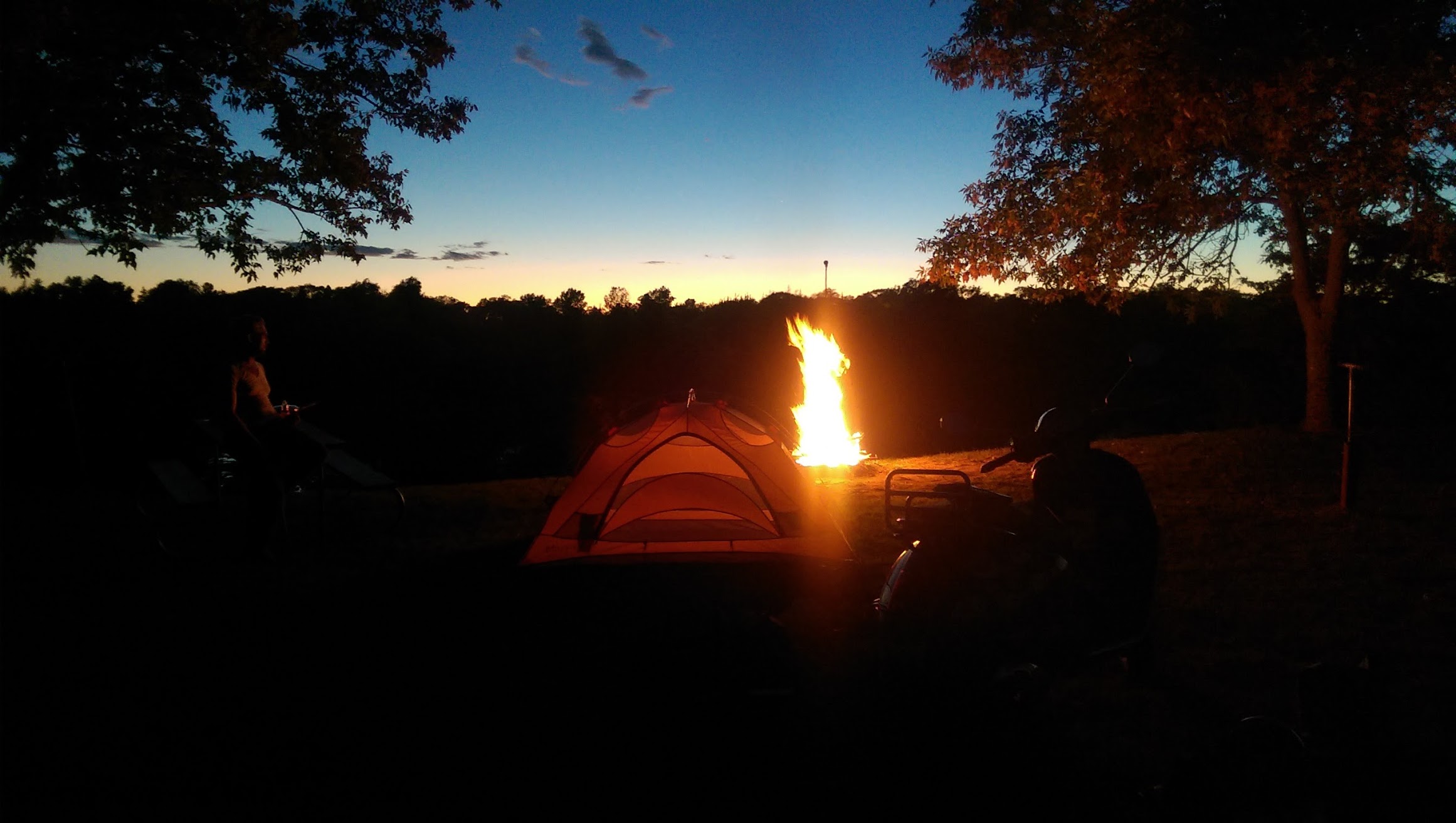 This is also interesting: we’ve exited the land of drought! Out here, nobody cares if you light a fire with gas and casually turn away from it. We cheerfully burned all the wood, and enjoyed our dinner and the last of our South Dakota-brewed spicy pepper beer. 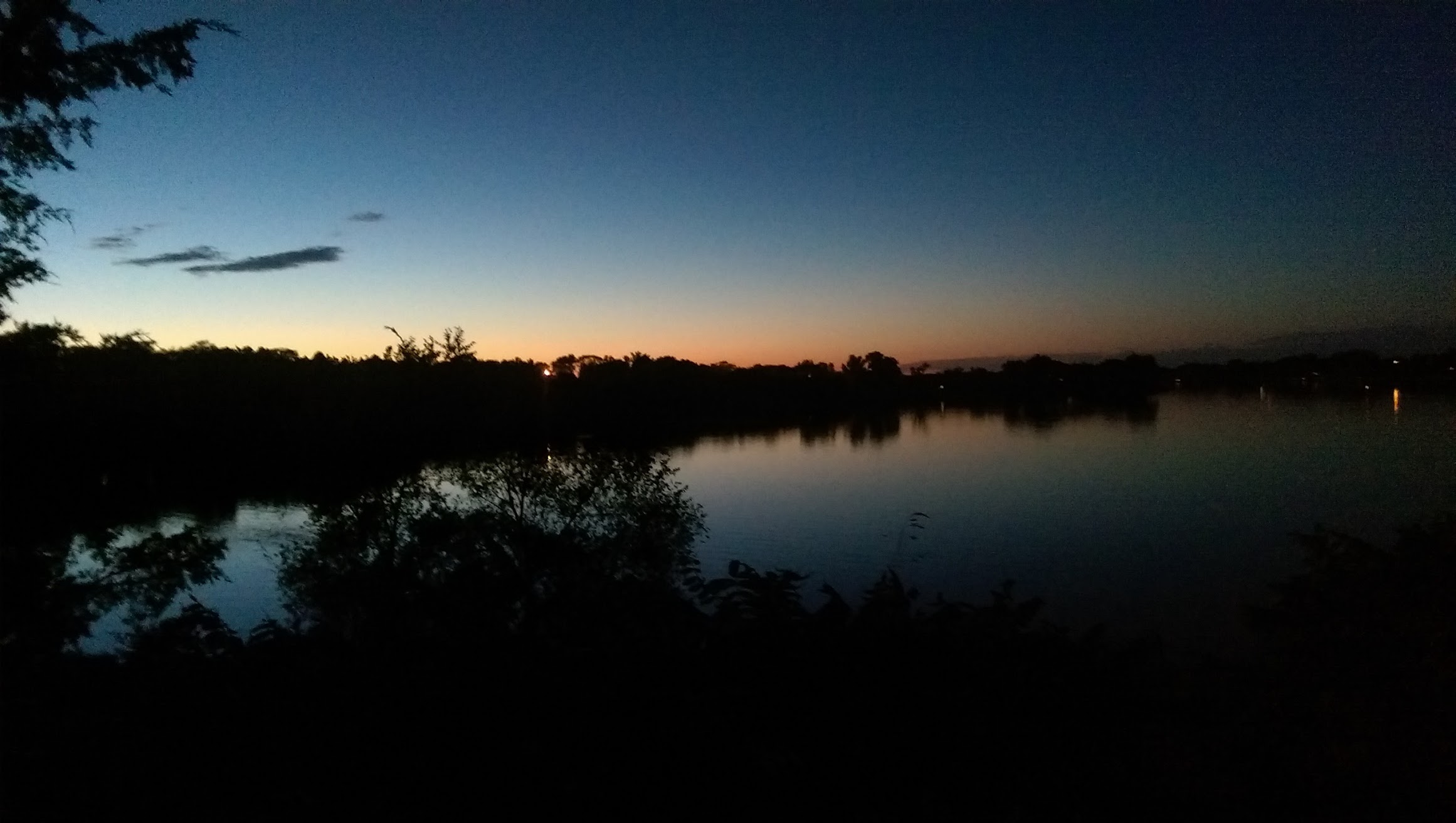