Today we leave Wyoming for the last time and set off into a new state, South Dakota, where we visit iconic American landmark Mount Rushmore and several things besides. 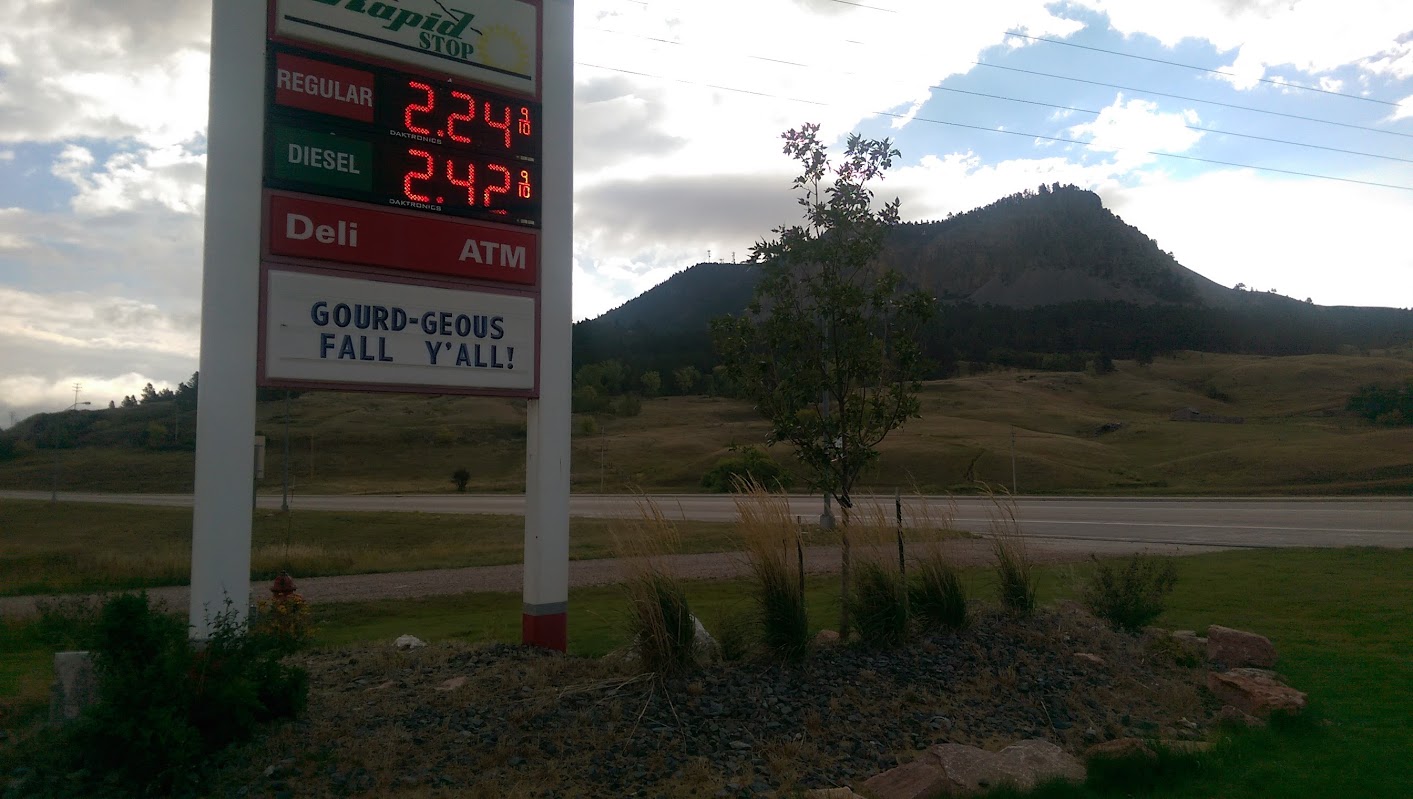 It starts off with the pattering of rain on our tent fly, something we’ve only seen one other time in just over three weeks on the road. We size up the weather and decide it doesn’t look that bad. Sure enough, it lets up by the time we’ve eaten breakfast and are ready to pack the tent - but we can see storm clouds nearby, so we make a break for it while we can. 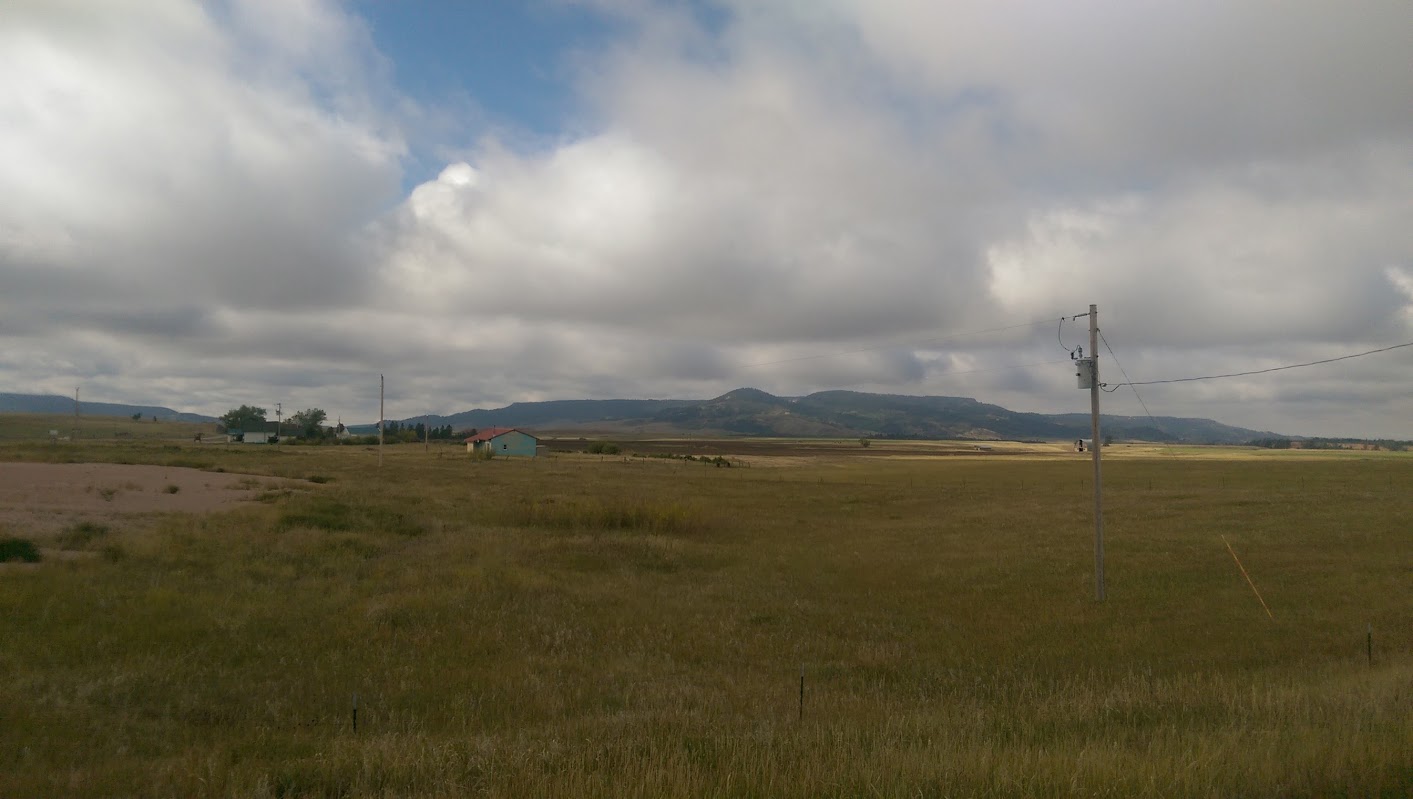 The next couple of hours take us up and over the Wyoming Black Hills towards Newcastle, which greets us with an enormous sign that reads “Wyoming Coal”. Our travels so far have been full of defunct resource extraction outposts, whether for lumber or coal or gold and other precious metals, but for now this small town seems to be doing OK. We stop in at the diner for a bite before heading down the highway towards South Dakota. 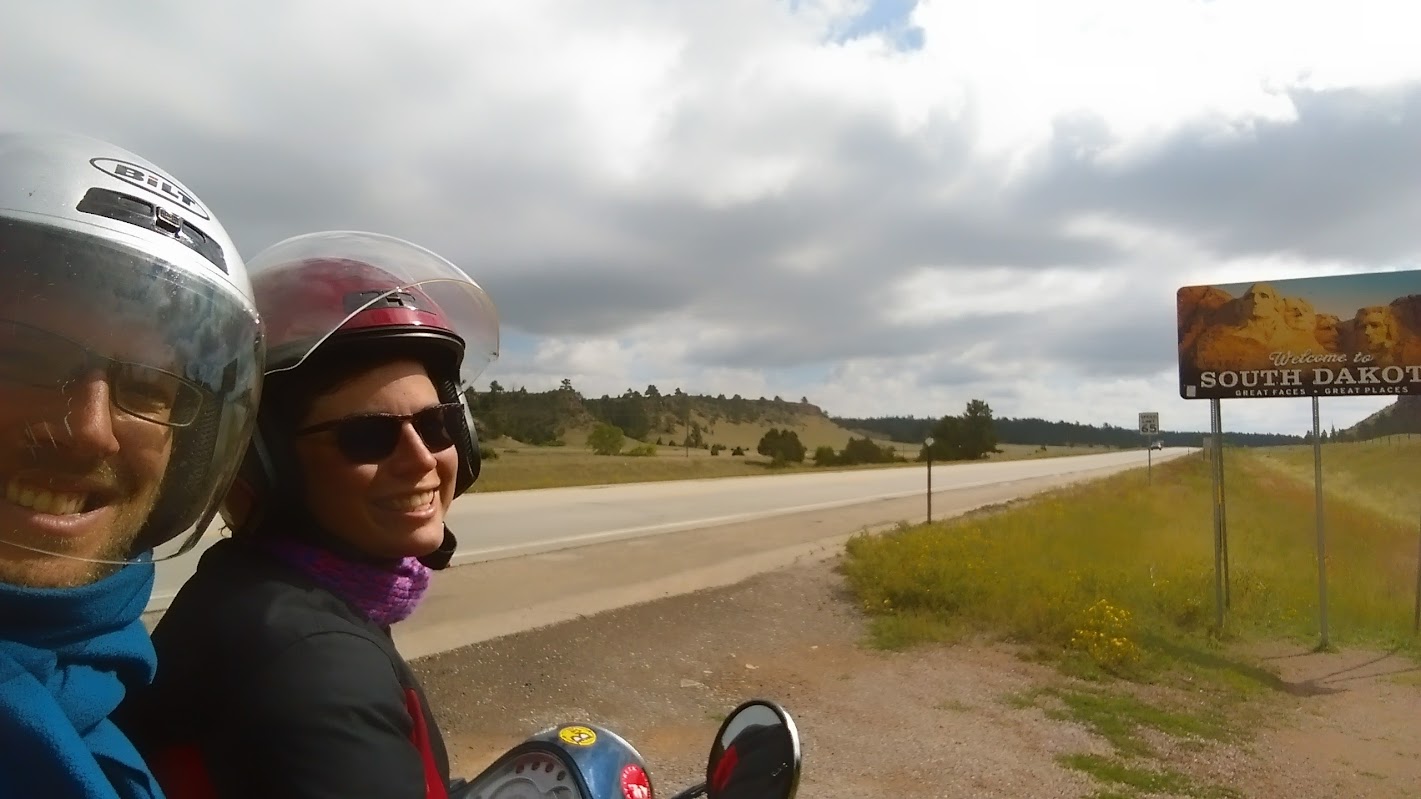 These hills are home to a number of landmarks, natural features, and memorials, making it one of the most heavily visited parts of America. Our first stop, Jewel Cave, is not quite on the usual tourist route, and is correspondingly less busy - we have a chance to walk around the visitor center, but unfortunately have just missed the cave tour. The decision is tough, but despite the morning rain it’s turned out to be a fantastic day for riding, and we have several other things to see, so we reluctantly say our farewells without seeing the beautiful calcite formations down below. 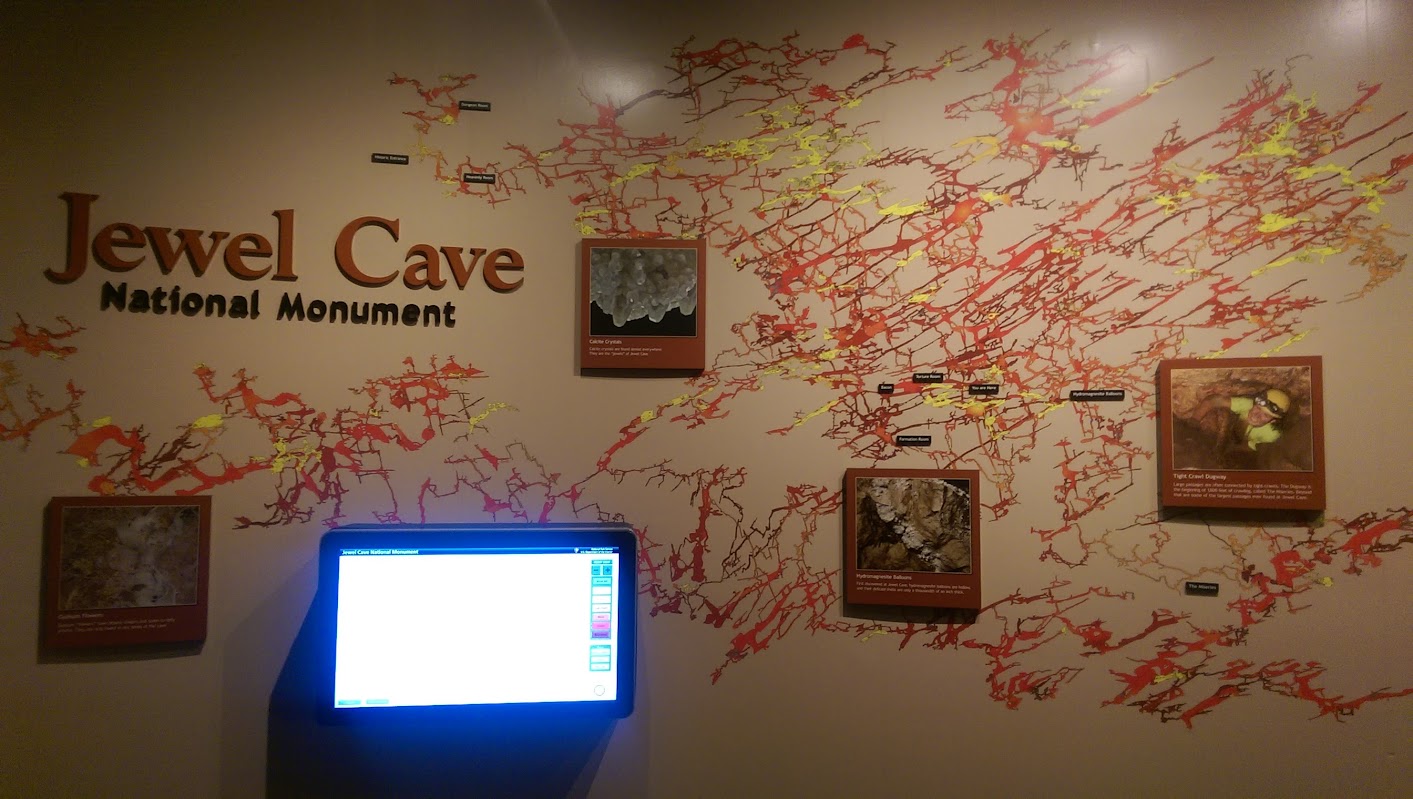 Traffic becomes thicker the closer we get to Crazy Horse and Mount Rushmore, though clearly it isn’t as bad as it likely was a couple of weeks ago for Labor Day. We spot a pie shop and grab some delicious strawberry-rhubarb-jalapeño pie: one must have sustenance and energy to cross these hills, and we’ve still got a long day of touristing ahead of us! 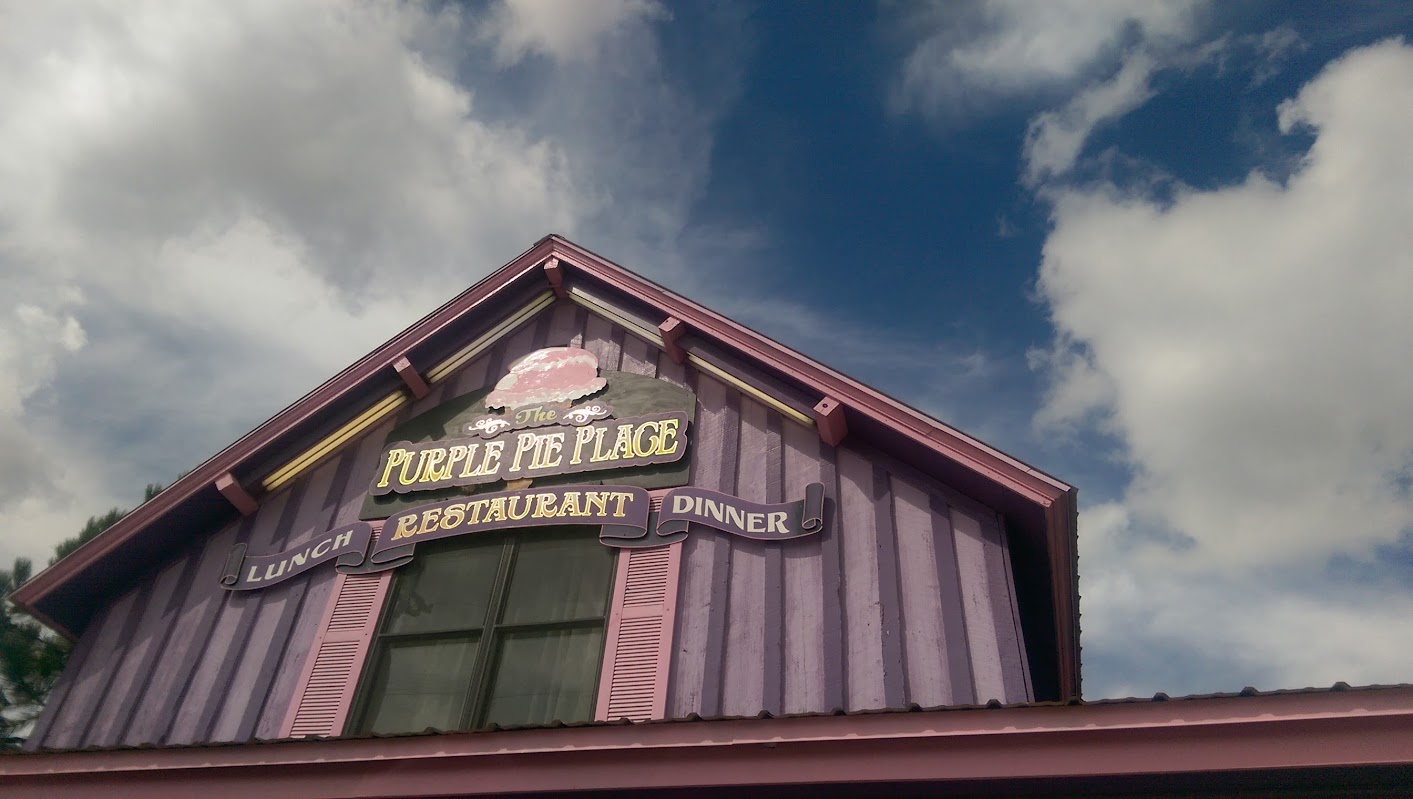 Next up is Crazy Horse, the yet-unfinished homage to the Indian leader who was once asked “Where are your lands now?” and famously replied “My lands are where my dead lie buried.” It’s an inspiring quote, and it invites further reflection on the nature of ownership: what gives a person or society the right to call land theirs? How should we deal with competing claims? Meanwhile, Crazy Horse’s enormous face (larger than all four heads of Mount Rushmore, the informative video and displays cheerfully remind us) and partially excavated outstretched arm stare off into the hills. 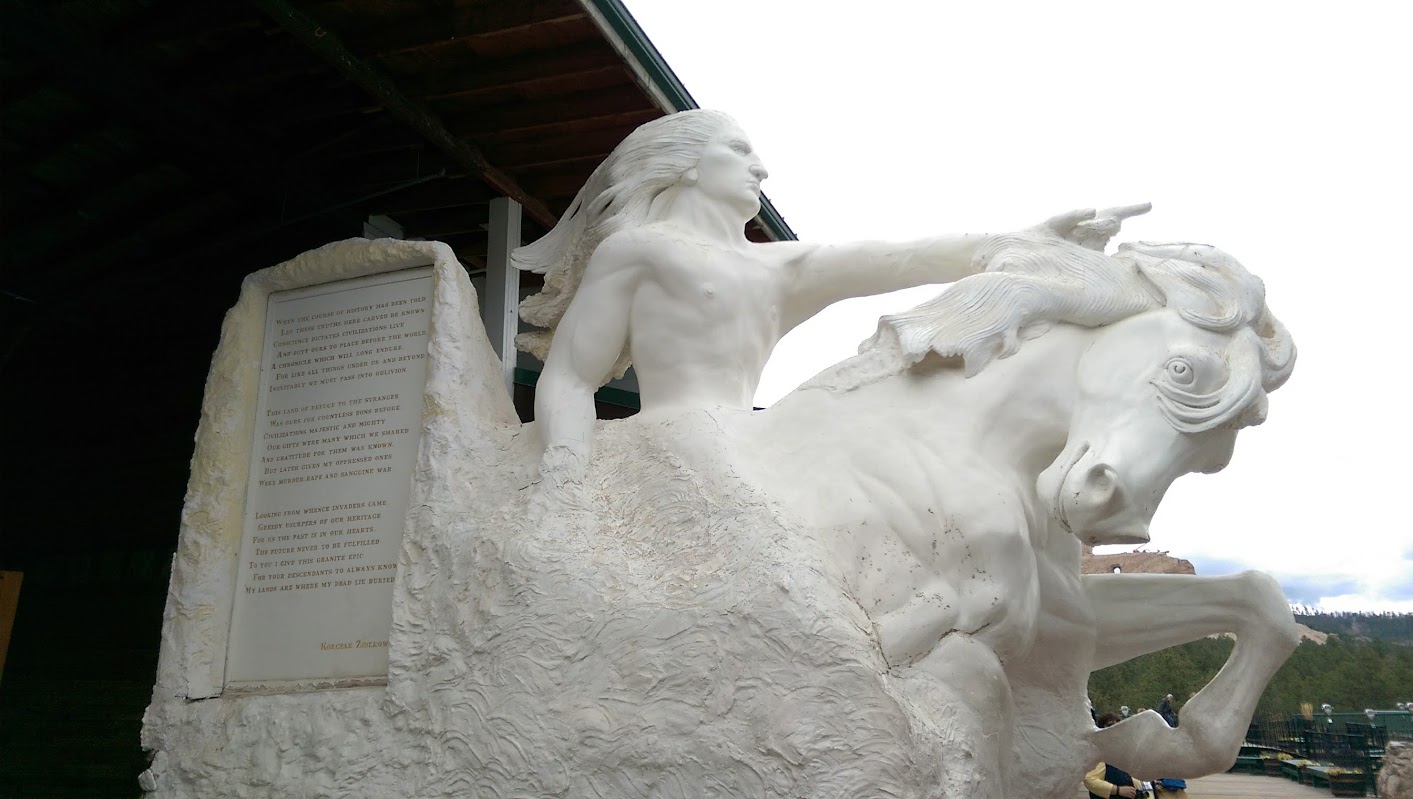 The Indian museum is a bit disappointing; rather than take the opportunity to educate visitors about the culture, practices, diet, etc. of the native tribes, it instead presents a scantily-labelled selection of native arts with no explanation or context.  I leave realizing that I don’t really know anything of substance about how the tribes live, either today or in the past: my entire knowledge of these people revolves around some lip-service animist / spiritualist stereotypes, and perhaps a few factoids here and there of isolated battles or practical uses for bison bladders. I’ve probably learned more about the Polish sculptor who made Crazy Horse his life’s work and his family.

We head from there to the Mount Rushmore National Memorial. Having visited several national sites at this point, we’re naturally inclined to ask: what distinguishes the different categories?

These are different again from state parks, forests, etc. which are funded at the state level rather than the federal. (Crazy Horse falls into none of these categories, as its managers steadfastly refuse to accept government funding at either the state or federal level.) 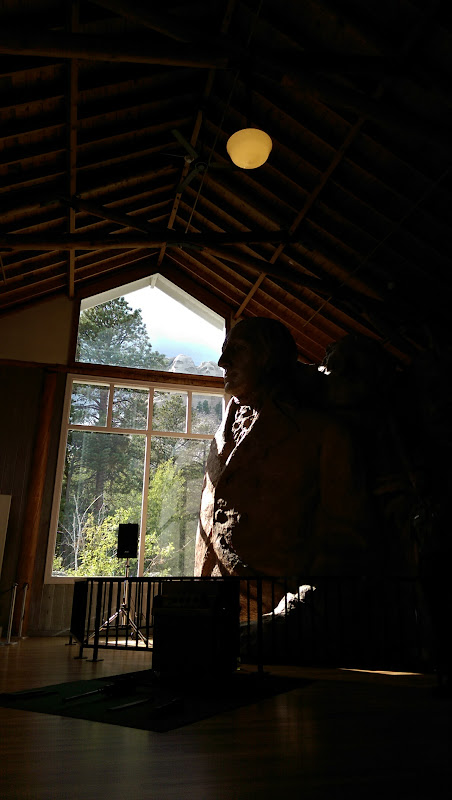 We catch a quick ranger talk about sculptor Borglum’s process in designing and crafting the mountain sculpture. So just how do you go about carving a mountain? Well, you create a scale model, try it out, tweak as necessary, and eventually get your final measurements down. To transfer those measurements to the mountain, you then use this ancient sculptor’s aid: 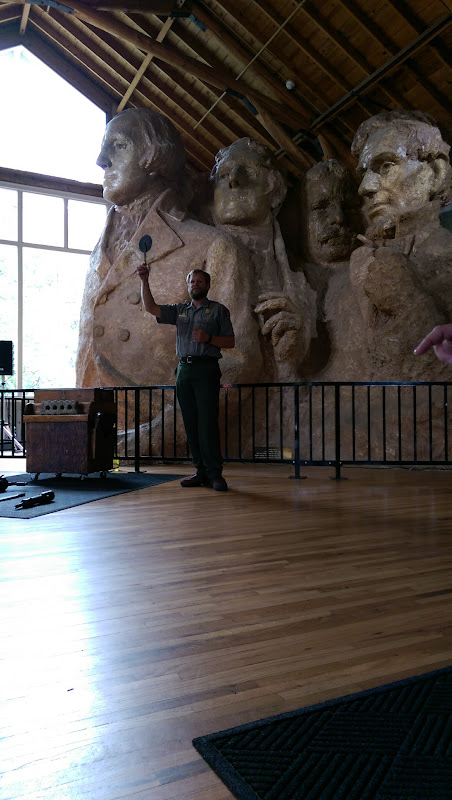 along with a similar tool atop the mountain. Also of interest: Borglum apparently got his start carving mountains with a job for the Daughters of the Confederacy, who fired him when he insisted on representing General Lee with a hat.

We pick up groceries at the amusingly-named Krull Market, then head down towards Rapid City where we find an unexpectedly beautiful RV park with terraces overlooking the Great Plains below. From there, we spot a massive stormfront and several impressive lightning strikes: our first real storm! Will we end up riding into those storms tomorrow, or will we continue to have good luck with the weather? We’ll see in the morning…