Final morning in Billings, then it’s off into the great unknown again as we cross the Northern Cheyenne Reservation to the small town of Broadus near the state border with Wyoming. 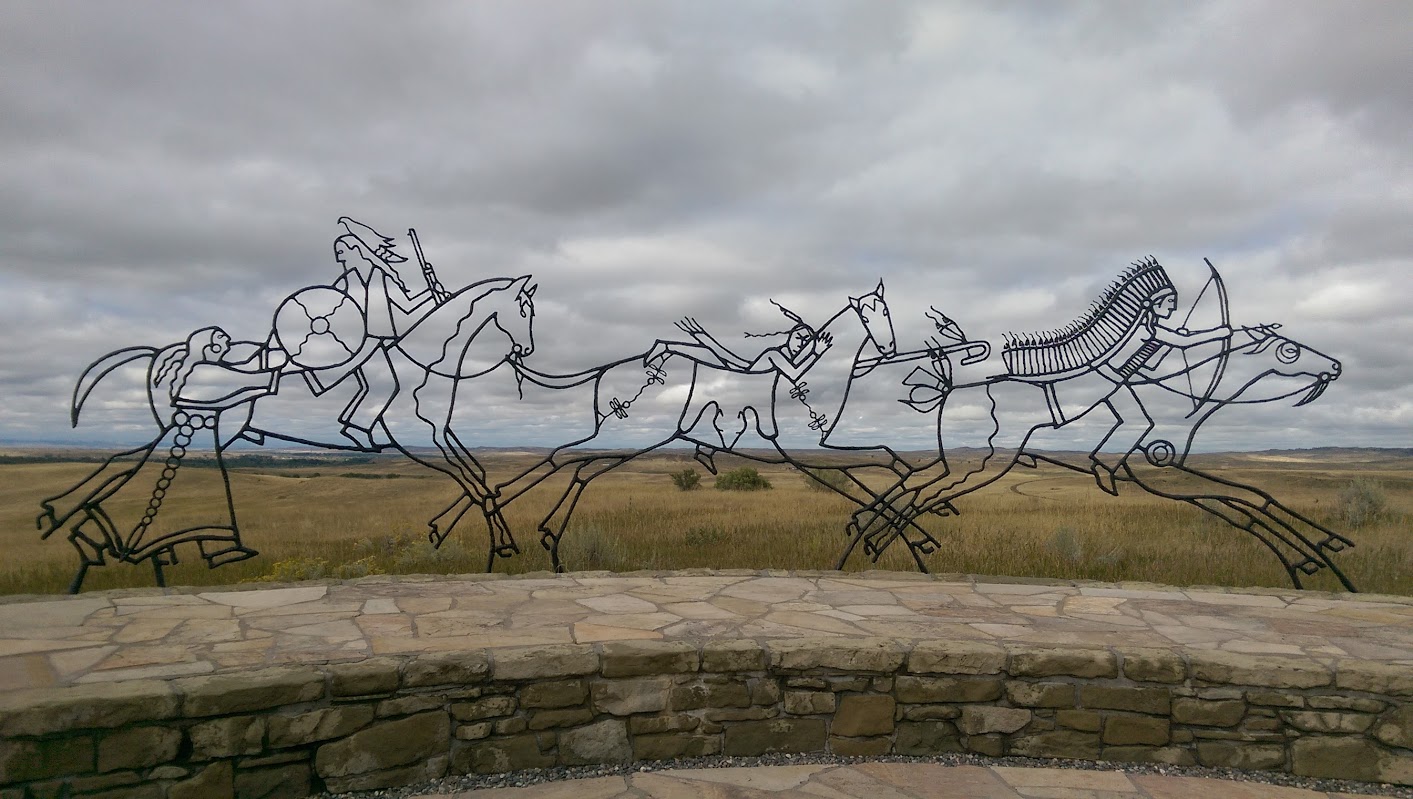 We get an early start with biscuits and gravy from the hotel restaurant (which, with an egg and some hash browns, is sizable), then head over to the repair shop to bring the Vespa in for its scheduled maintenance. The 10 000 km (6 000 mile) maintenance is pretty comprehensive, from tension checks on just about everything to spark plug replacement - plus we’re nearly 1 000 miles overdue, and we just crossed some big mountains, so we figure it’s been worth the wait. 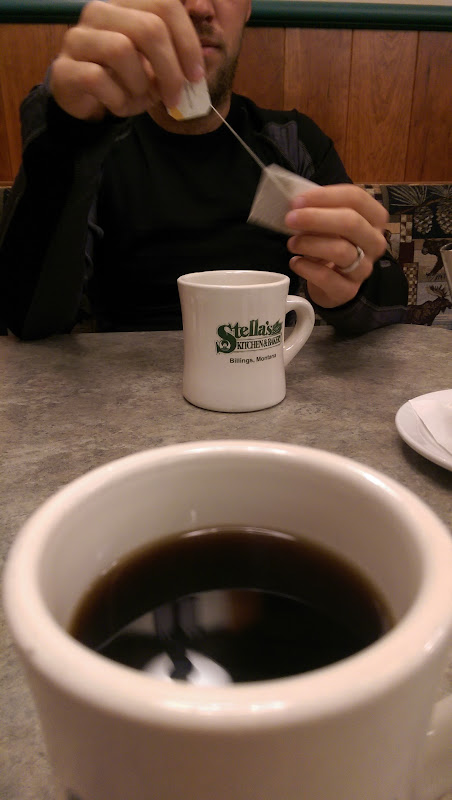 With nothing to do for a couple of hours, we walk back into downtown and grab some drinks at Rock Creek Coffee Roasters, where we catch up on blog posts (yes, these take time!) We thought about heading into the library, but it doesn’t open until 10am.

We head back to the shop, pick up the bike, and we’re off down the road! Only thing is, it’s cooled off a lot since a few days ago, and we’re soon stopping at a roadside service area to bundle up in everything warm we can muster. Turns out those polar thermal layers were an excellent - and excellently-timed - purchase; we’re still cold even with them, but we’d be freezing without.

At the service stop, we strike up a bit of conversation with the guy in charge of facilities. He’s surprised to see a Vespa at his service stop, as it’s off the freeway. We get that a lot, since most people would never guess it packs a 300cc engine and can whip down the road at 85 mph with both of us on back. (We did that maybe once back in SF. It’s fun in a “well, this is probably how I die” sort of way; on this trip, we usually stick to 40-60 mph, maybe a bit faster on freeways.) He chuckles a bit before wishing us both safe travels.

As we near our exit, we start seeing billboard ads for the highway we’re about to take, trying to convince people to opt for the scenic route (and hopefully bring some tourism to the reservation in the process). We were planning to anyways, in part because it gives us the opportunity to see the Little Bighorn National Monument. Little Bighorn was the site of Custer’s last stand, and the last major Indian victory in a series of battles that ultimately ended with their defeat and the end of their nomadic way of life.

The reservation itself looks not unlike the rest of rural Montana: sparsely populated with a latticework of farms and ranchlands. We fuel up in Lame Deer, where a teenage girl is impressed (or maybe just amused?) by our chosen mode of transportation, before heading on to some low passes. We’re both shivering by this point from the cold, cloudy day. The weather promised a high of 65, but I’d be very much surprised if it ever got over 60, and the passes though low are colder yet still. In evidence of this, the larger hills even sport areas for the attachment and removal of snow chains.

At long last, we arrive into Broadus chilled to the bone and fairly starving. The motel runs a campground on the outskirts of town, where still shivering we set camp and light the stove. Fortunately for us, it’s a bit warmer here, and once in our tent our bodies finally start returning to something like a normal temperature. 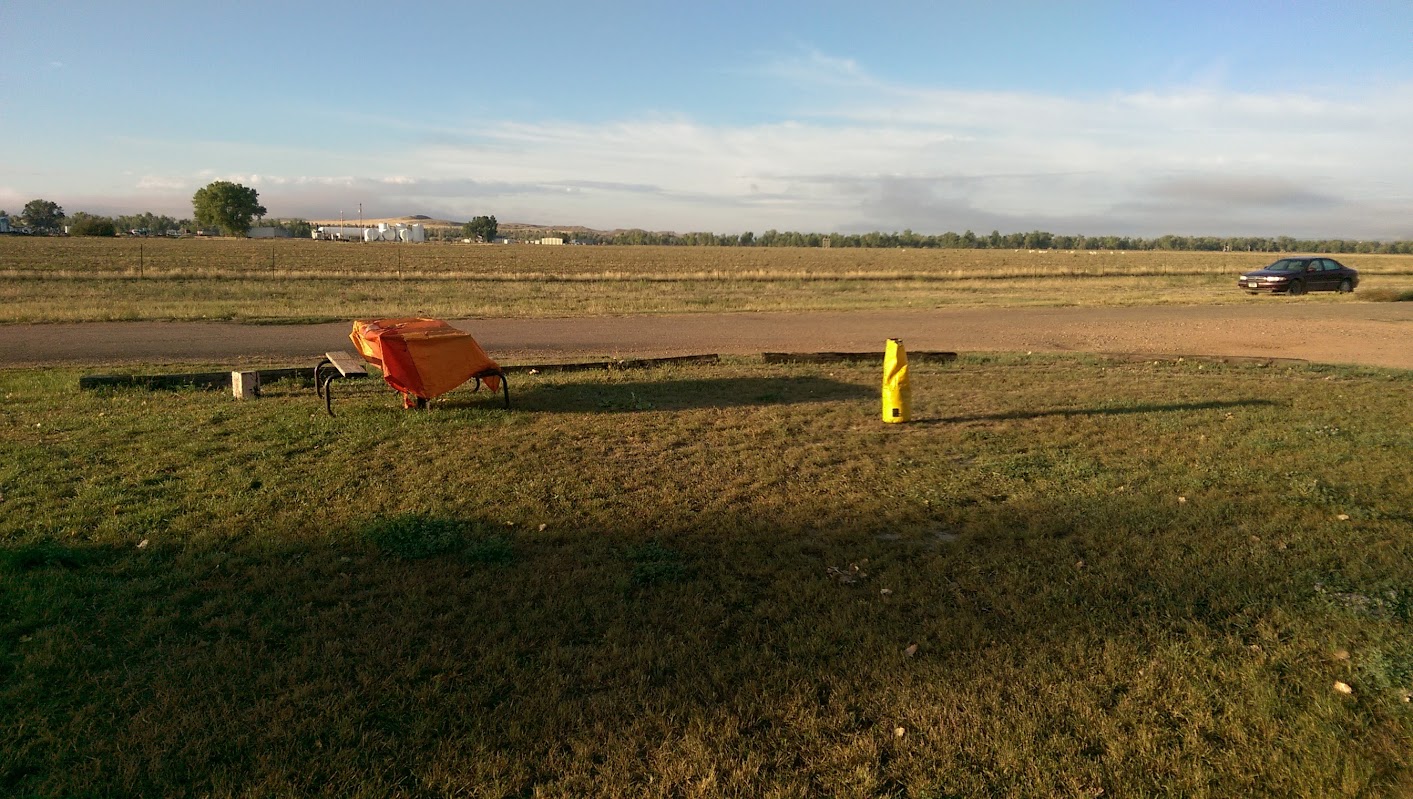 Tomorrow brings us back into Wyoming to visit Devils Tower. Valkyrie hasn’t told me much about it, so I’m left wondering excitedly what to expect…