Today we cross the Beartooth Pass at nearly 11 000 feet above sea level - and just about freeze our hands off in the process - before descending down to Big Sky Country to arrive in Billings for the first successful CouchSurfing stay of our trip! 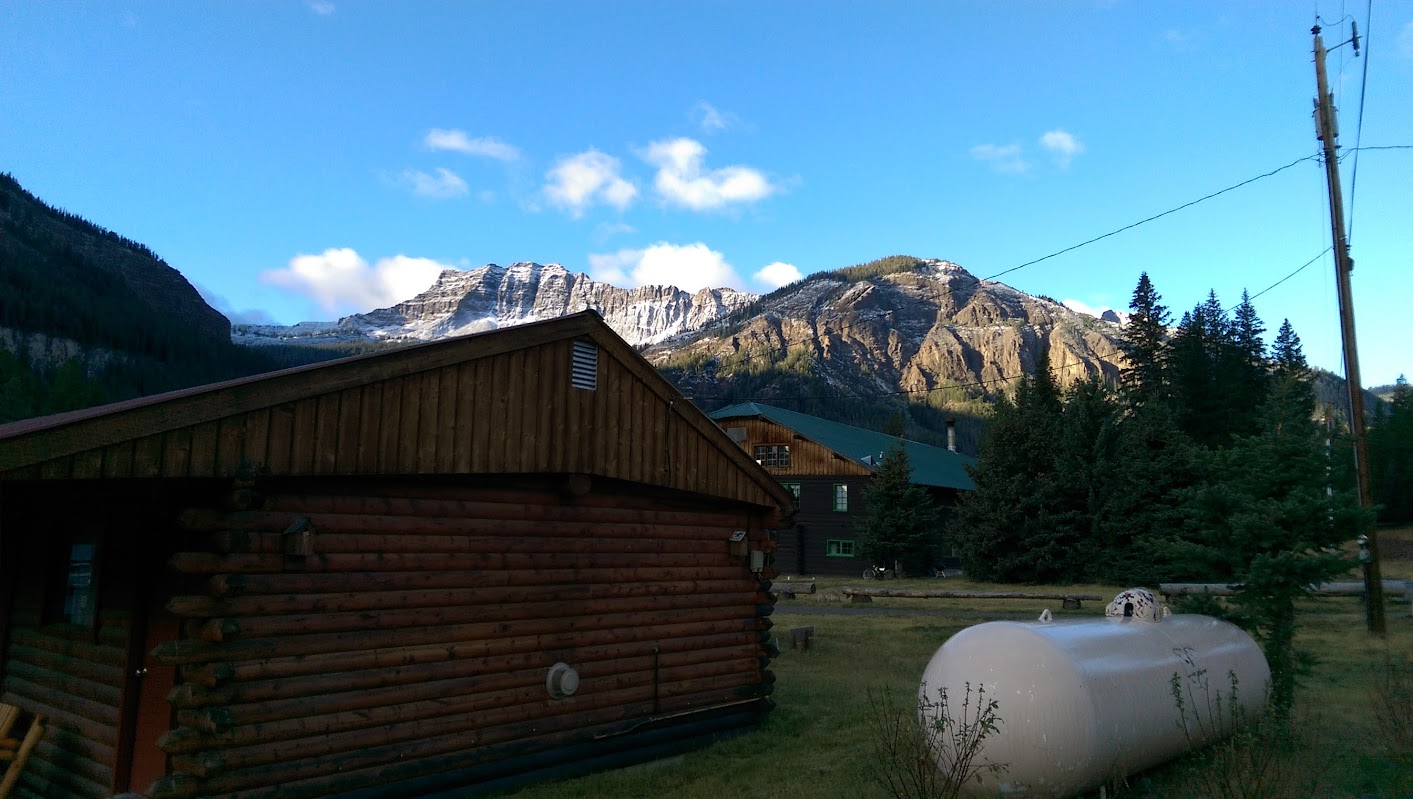 As you can see above, there was a spot of snow overnight - it’s hard to capture in photos, but it was actually snowing in Silver Gate when we woke up, and the Vespa itself had a light dusting: 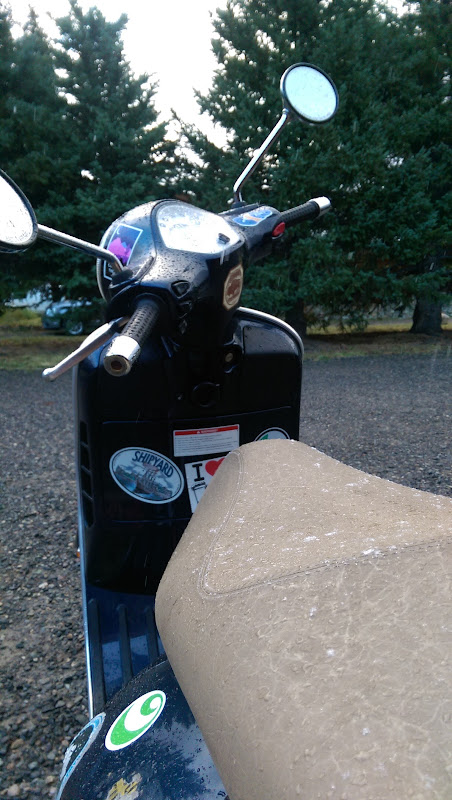 We cook a hearty oatmeal breakfast with almonds, cashews, and a fresh peach (which we carried all the way from Idaho Falls!) under the awning outside our motel room. We’re deliberately trying to burn time so we can reach the pass when it’s a bit warmer.

This is a good plan, and it turns out to also be a necessary one! A few miles down the road, we inquire about road conditions over the pass at the tourist info office in Cooke City. The woman behind the desk calls the Wyoming and Montana road services, and gets a conflicting report: according to Wyoming, the pass is clear, but Montana is still uncertain. (We learn later that the road was officially reopened at 10:30am, just a few minutes after we asked.)

The views out here are stunning: 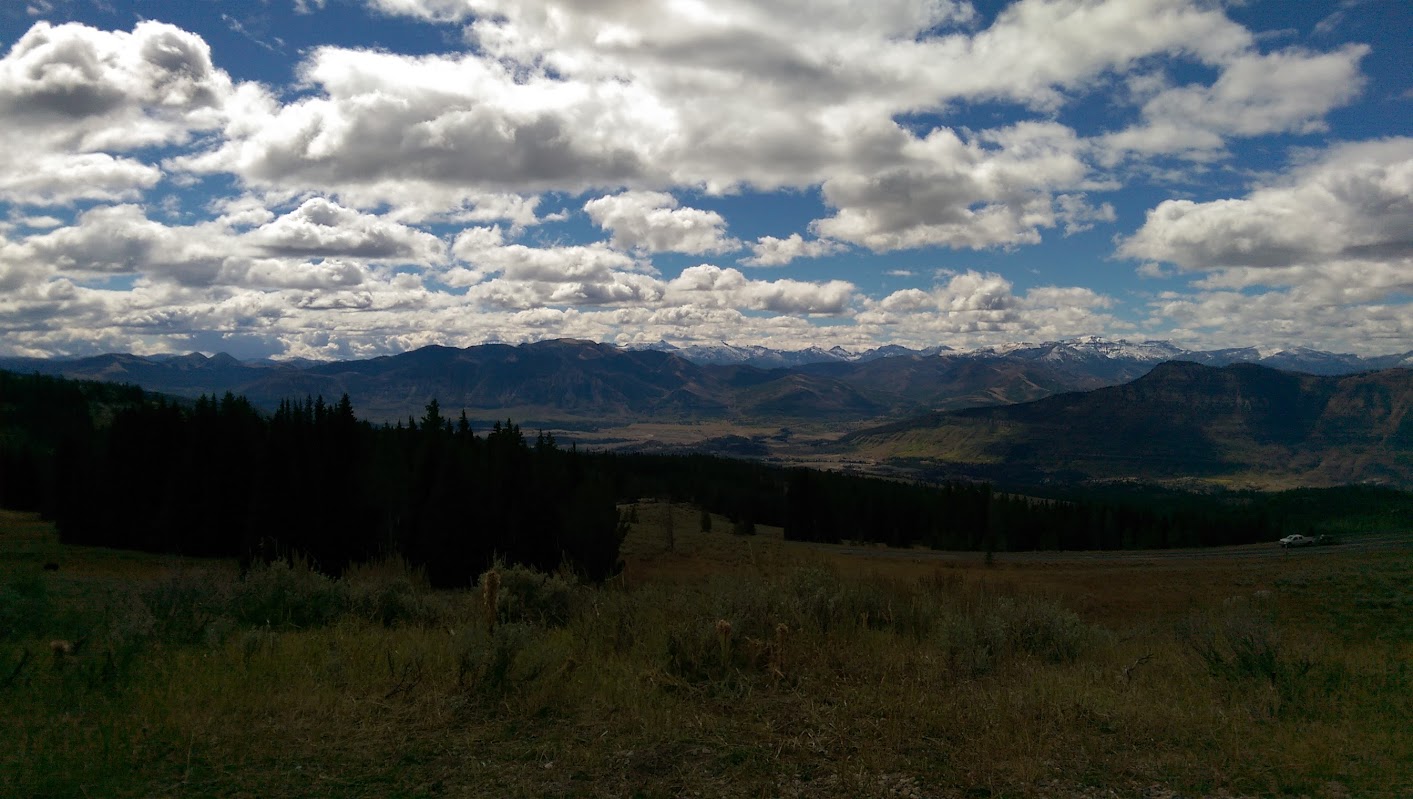 The Beartooth Highway is signed as an “All-American Highway”, whatever that means. It climbs quickly from the junction with the road over to Chief Joseph Pass (a mere 8 000 feet above sea level), carving an increasingly treacherous path through the mountains as the air grows colder and thinner. It eventually opens up in the Beartooth Plateau (around 10 000 feet now), where it passes by - of all things! - the Top of the World motel and general store. We spot an open-top tour bus, and can’t decide if they look colder than we do; after all, we’re now passing patches of snow and half-frozen lakes, and even our lined gloves aren’t really up to the task.

After the plateau is the final climb, which Valkyrie takes slowly owing to the bitter hand-freezing wind. A few warmth stops later, we finally reach the top: 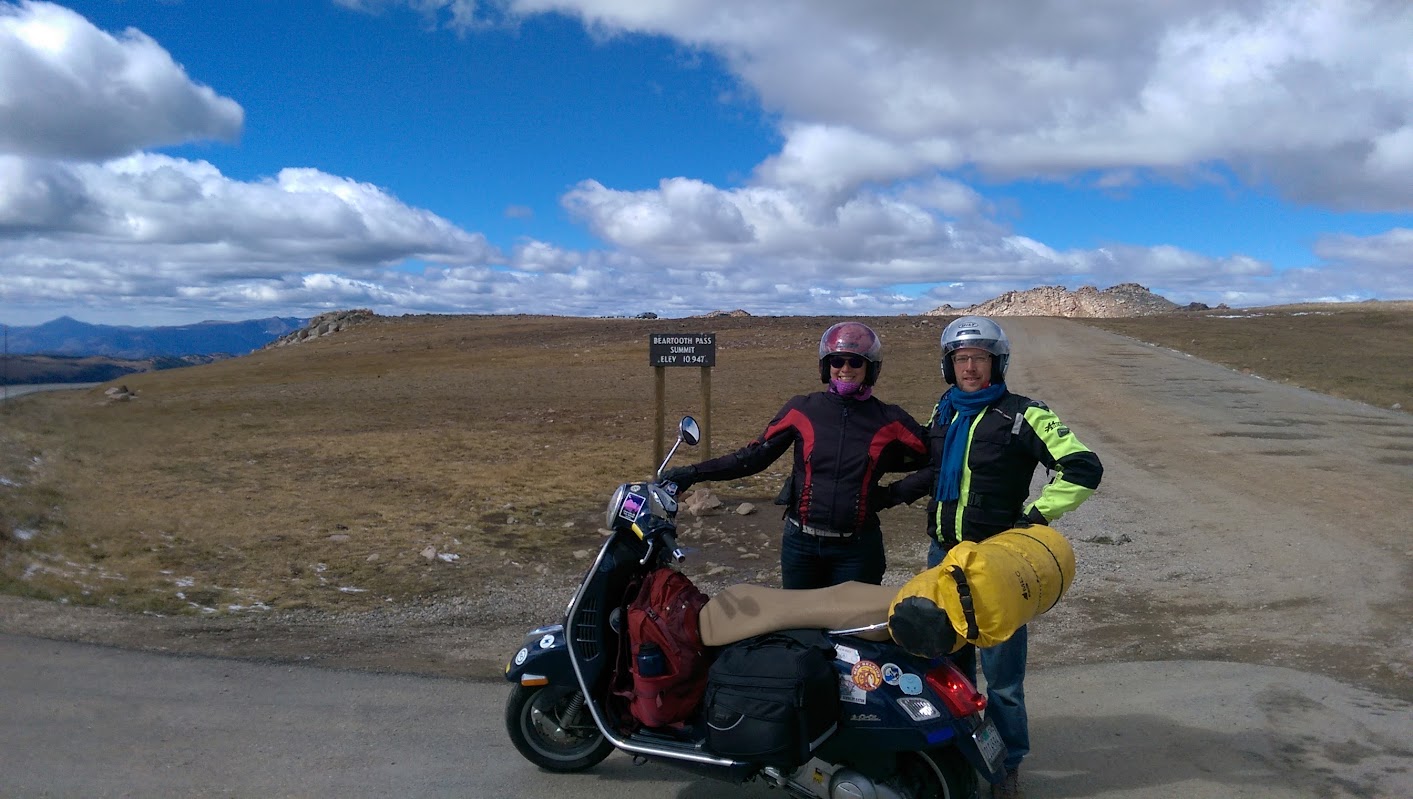 Then there’s a bit more plateau - we’re both shivering now! - before it finally starts winding back down into the valley above Red Lodge. Half an hour later, we’re sunning ourselves on picnic benches: 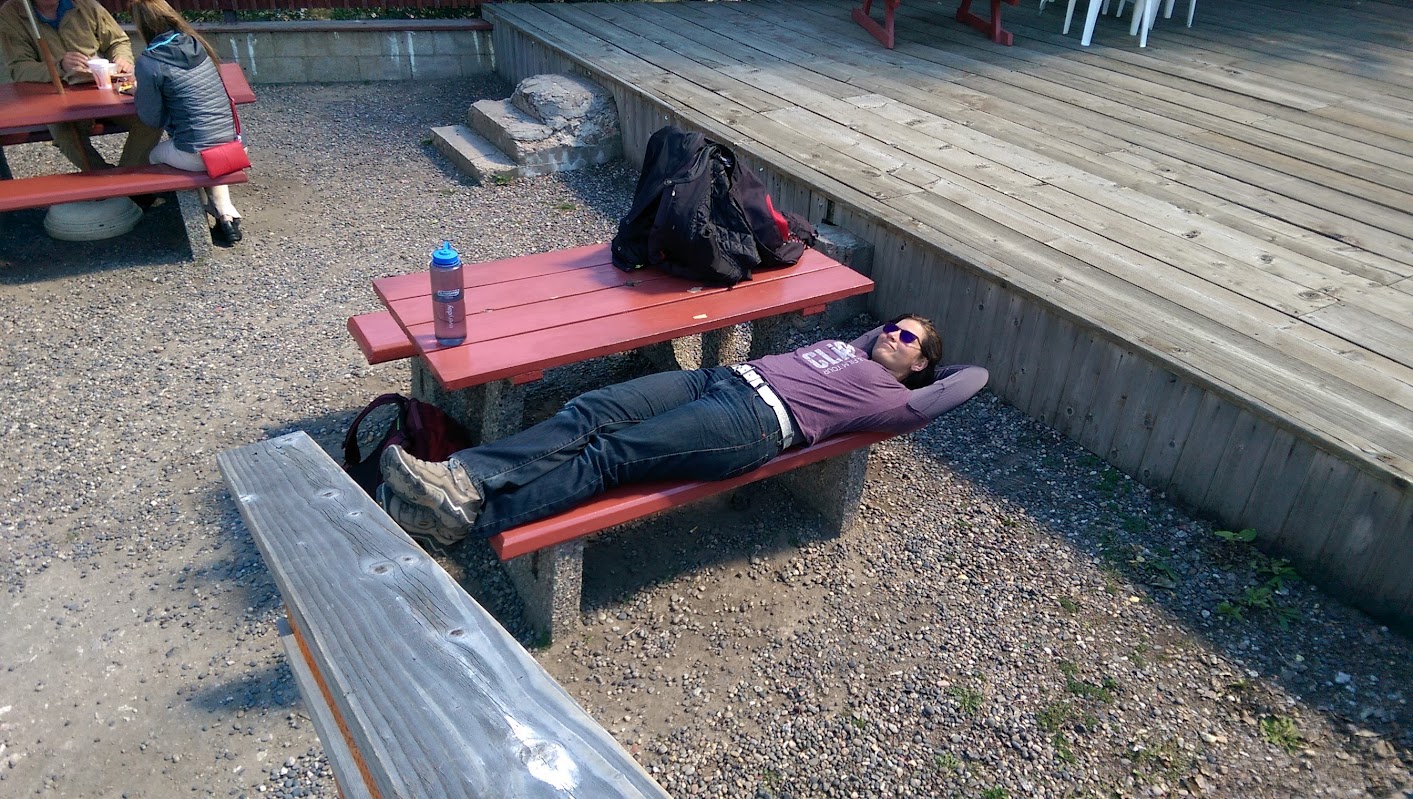 and eating Navajo Tacos (which the joint we stop at in Red Lodge calls Indian Tacos): 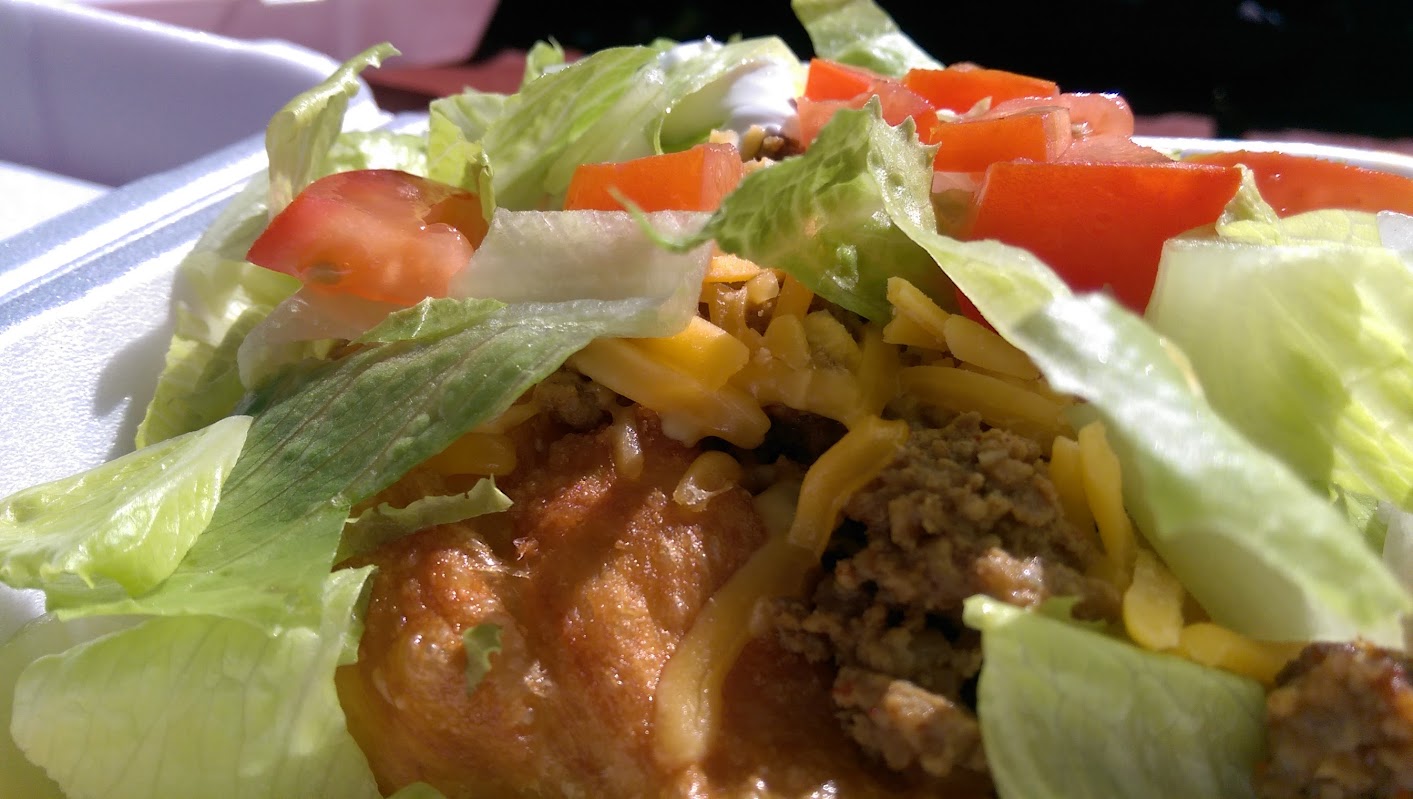 From there, it’s a straight line down the highway to meet the interstate some 15 miles out of Billings, and we’re soon in town. Our CouchSurfing host is busy for a couple more hours, so we head over to the library. This is usually a good way to find restrooms, drinking water, and wifi without having to buy food / drinks, at least here in the US. The Billings central library building also happens to be awesome (and relatively new!)

On our way over to meet Troy (our host), we grab some food at Lucky’s, a supermarket that sports the tagline “Organic for the 99%”. True to form, we get six beer brats (made in-store with local beer!), six ears of corn, and a package of sausage buns for something like $13, which is completely unheard of in San Francisco. (For those of you who know us as mostly-vegetarians: we almost always make exceptions when traveling, particularly to try locally-made food.) Before long, we’re feasting on grilled sausages and baked corn - yum!

We’re hoping to head onwards tomorrow, but we’re not quite sure - there happens to be a Vespa shop in town, likely the last one for at least 1000 miles, and our bike is overdue for maintenance…