We awoke today, full of energy and excitement about leaving Billings and getting on our way towards Devil’s Tower, Mount Rushmore, Crazy Horse, the geographic center of the US, the Corn Palace, Wall Drug, the Badlands, Wind Cave, … But first, we got to spend some time with our hosts at the Billings downtown farmers’ market! This was the first farmers’ market we managed to get to; wow did they have some huge vegetables. There were also Hutterites, the local Amish-like community, represented there. Evidently they have some internal rules that allow them to use technology for work purposes (but not personal ones), so several of them were fielding calls on cell phones, and a few of the women had sculpted balloon crowns (how I wish I had a photo of that) perched atop their heads while in traditional dress. 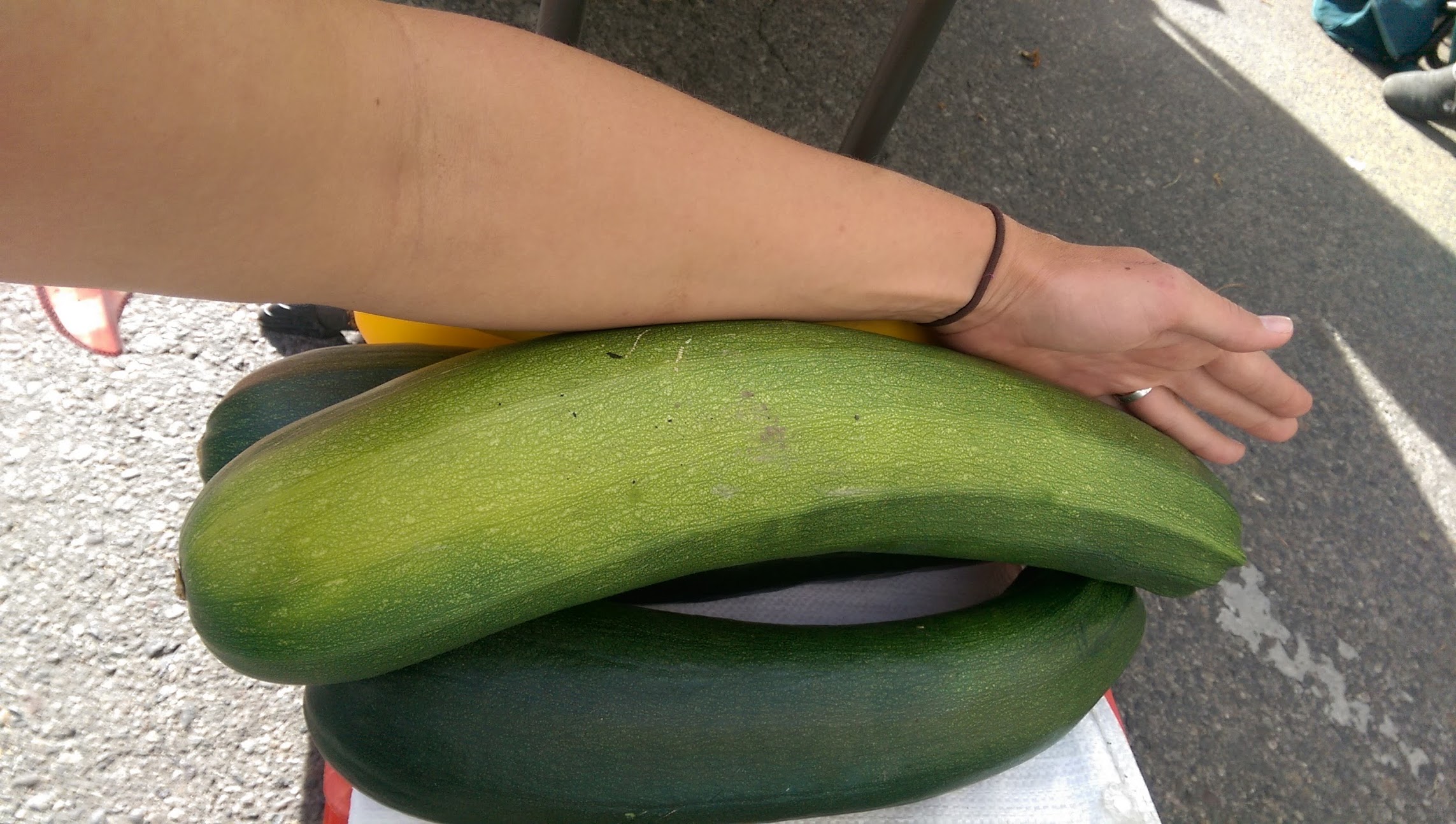 The location of the farmers’ (farmer’s?) market was also super cool: it was right downtown, and much of it was underneath a structure with slideable shade panels (see photo below). We picked up the ingredients for shakshouka (an Israeli dish which is basically eggs poached in cuminy tomato sauce) for dinner, had a coffee downtown, and were treated to a flash mob by a group called “Up with People”. Apparently their deal is that they travel around from city to city, across the world, doing community service and raising money for local charities. Here in Billings was a group of about 100, and they all stay with local host families, too. I hadn’t heard of them before, but I hope we hear if they come to Toronto since it would probably be a lot of fun to host them! 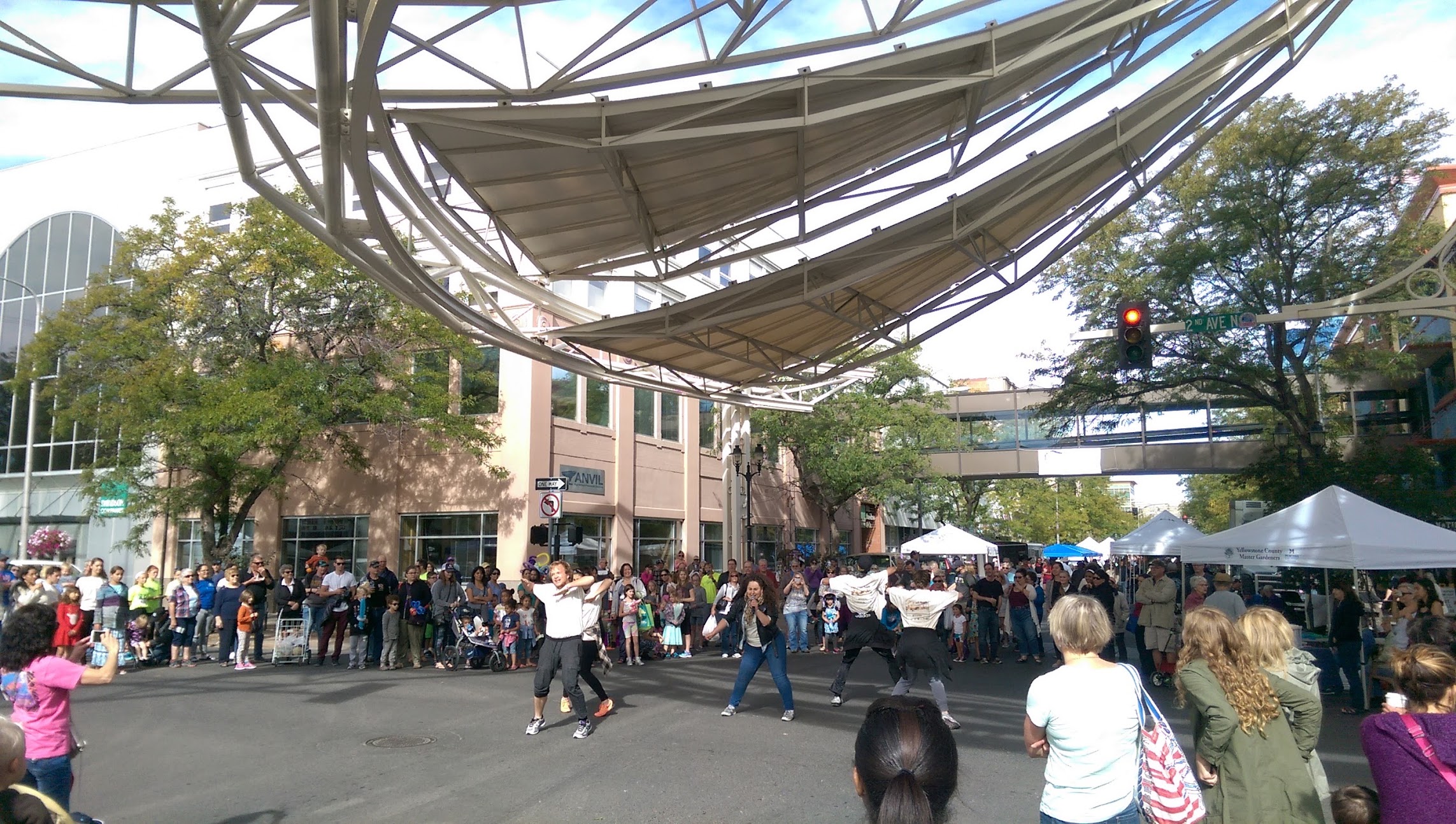 Our farmers’ market run complete, we headed back to each some lunch. There was another couchsurfer staying the night, and all three of us bid farewell to Troy and his roommate Sean. We hopped on our Vespa, and Chris hopped in his Mini Cooper (which he was driving for money! This is apparently a business; he said you can check it out at carstoflorida.com), and we all sped away. 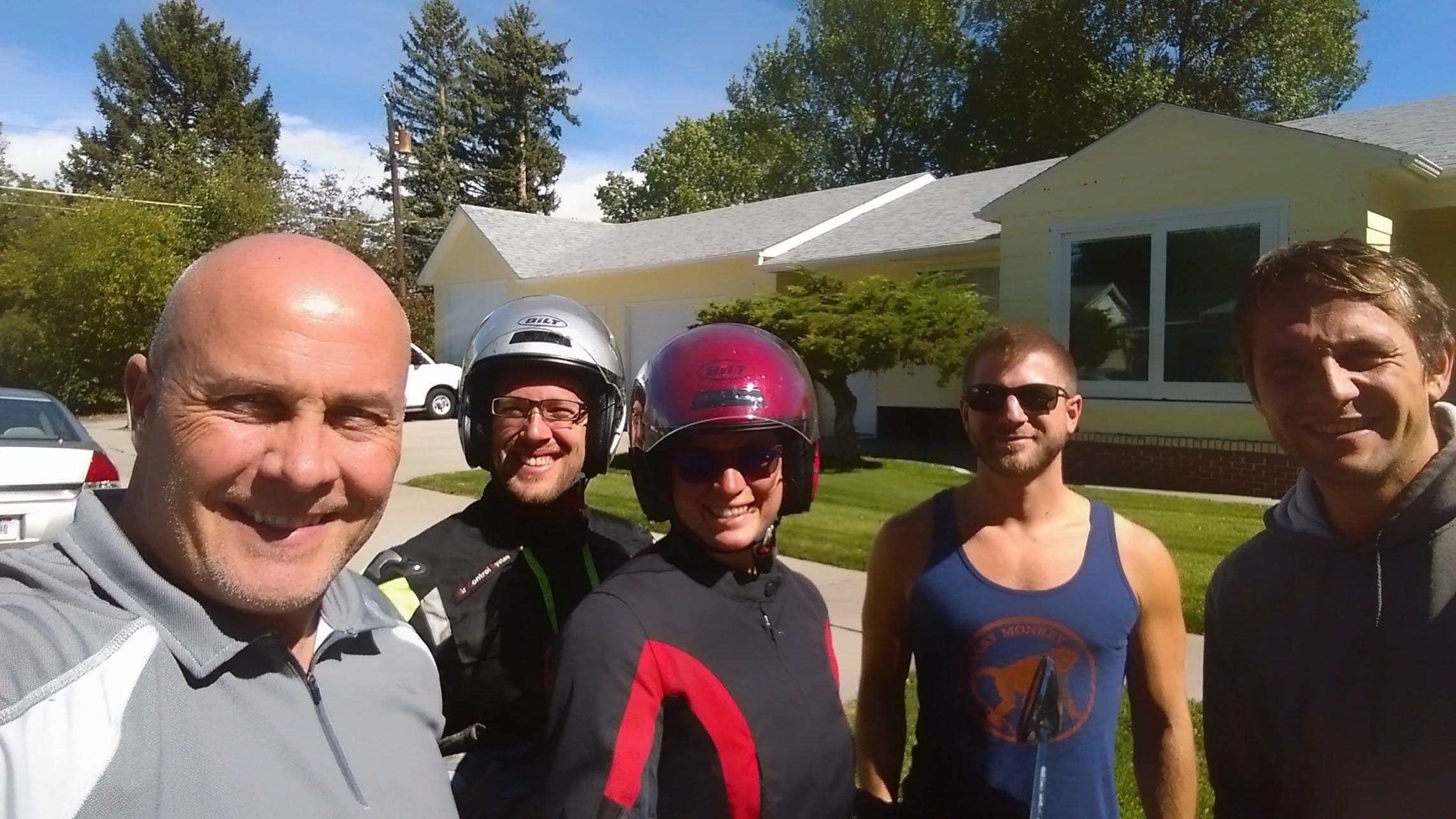 We bounced out of town and onto the Old 87, the only viable non-freeway route. We passed cows and prairie dogs, switchbacked up into the hills, and enjoyed the incredible warmth of the ride. It was a beautiful, sunny day, and a great day to get back on the road. The sunshine seemed to welcome us back after our days freezing in the mountains.

But we were pondering. For a week or so we’ve been hearing a bit of a whirring noise from the engine on occasion, and as we’ve been watching the odometer creep up we noted that we’ve gone roughly 2000 miles since California. Theoretically, the Emperor needs to be serviced every 2000 miles, and we were technically over that by about 800 miles. We’d taken a peek at the service manual, and the 6000 mile service includes replacing a lot of components (spark plugs, some seals) and checking up on the situation of several more things. We’d considered doing the service ourselves when we had time, but there was enough extra equipment required that we weren’t quite comfortable with it. As the whirring continued, we meditated on the fact that Billings actually has a Vespa dealership and service center, and that it is likely the last one we’ll see for 2000 more miles. I’d called them earlier in the day, and they said the earliest they could service it would be Tuesday. Groaning somewhat at the delay of half a week, we decided that it was time to turn around and return to Billings to get the service done.

Our 2000th mile put us in the parking lot of the Vespa shop. How’s that for irony? Also ironic was the fact that, as we told them about our long haul on the machine, they remarked that the last long-hauler they’d seen through the shop had blown his engine going over the pass (the Beartooth that we did yesterday). It just so happens that Troy also hosted that person, and had told us about him yesterday. :) It’s a small world.

We sheepishly called our host back, and he said we’d be welcome to stay with him for a few extra days. We scooted back to his place and re-unpacked everything from the bike. Troy and his roommate invited us out for tennis, so we went and ran around the court hitting the ball wildly for an hour or so with them. Evan and I cooked the shakshouka for everyone (including another surfer who appeared, also named Evan), and we all headed out to the Art House Cinema and Pub: the local independent theater which also serves beer. 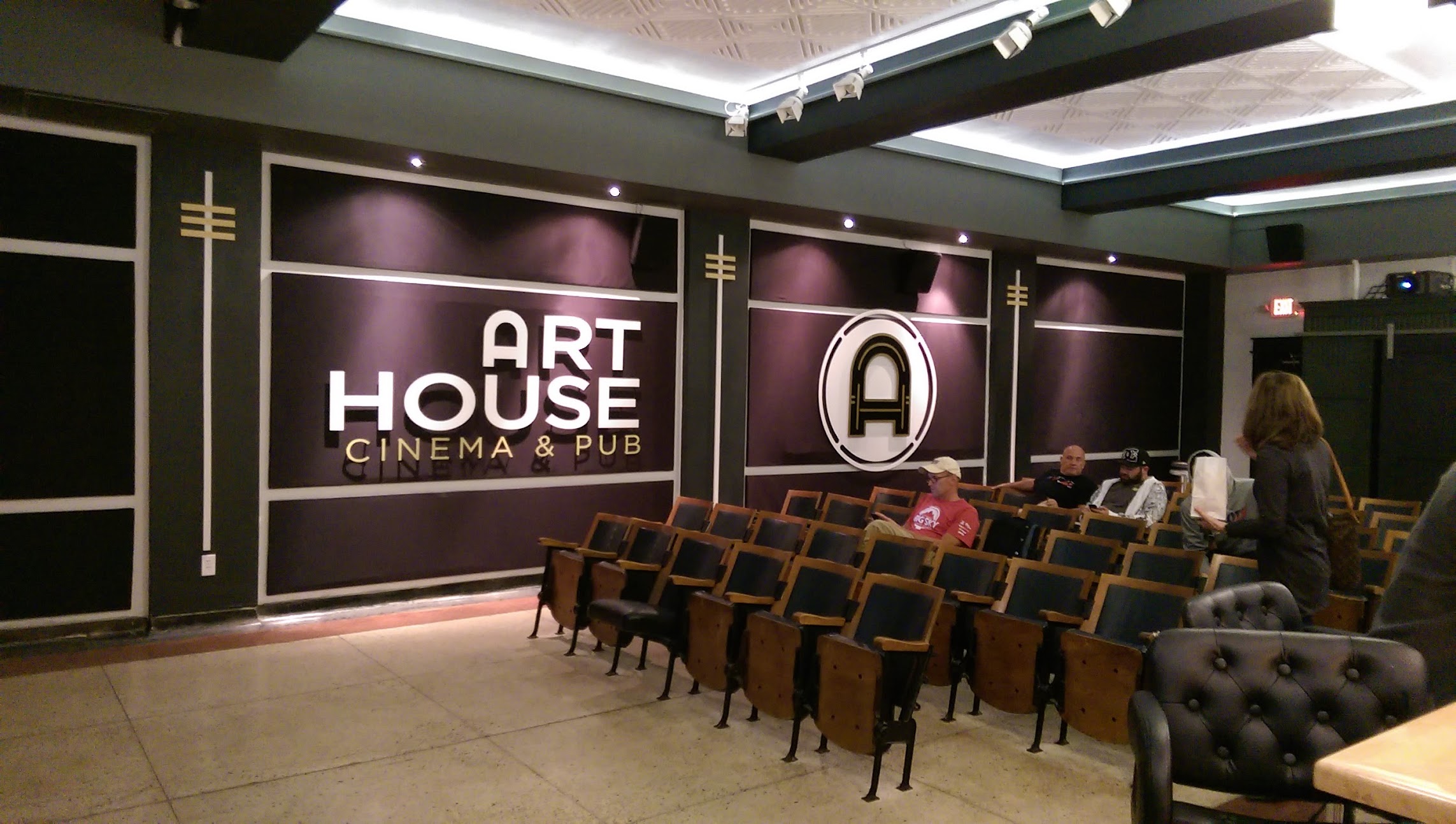 The film was “Captain Fantastic”, and it was about a family living in the forest in the Pacific Northwest. The kids were being trained in the ways of survival, as well as learning from books about every other kind of topic. The focus of the movie was their return to civilization as they all had to come out and deal with their mother’s death. It was amusing to hear Troy talk after the movie; one of his first comments was that there were a lot of illegal things depicted in it (he’s in law enforcement). We strolled around town a bit after the show, and one of my favorite things we saw was the Montana Brewing Company, located in the old Montana Power Company building. 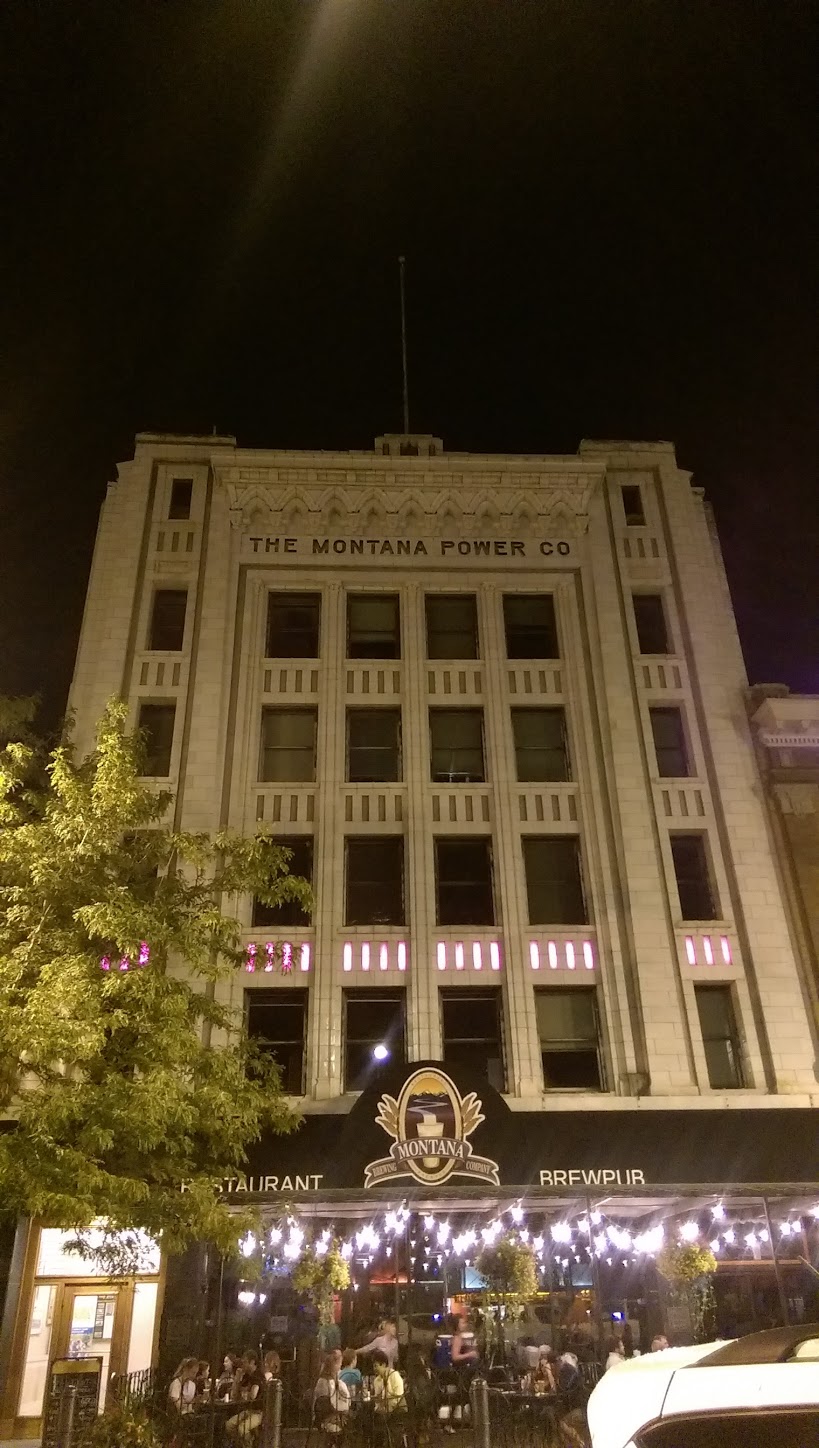 This building was constructed around the turn of the century, and actually had the lighted façade originally. Super cool!