We awoke, actually sweaty from being too-warm overnight in our polar thermals and bright orange bungalow. We were on a mission, so we struck camp as quickly as we could, ate a cold breakfast and spared no time for morning tea, and dressed rapidly. We mounted up, and paused only to chat with a couple who was intrigued by our scooter. We mentioned to them that we were going to move campgrounds, and they said that they’d considered it but with the challenge of getting a site at all had decided just to stay in place for the night. They blamed it on the Baby Boomers who all have retired and are just eternally tooling around the country in their RVs (they, too, were Baby Boomers).

We rode for a bit over two hours. We saw elk, mule deer, bison, and other creatures along the roadside (and I do mean along the roadside; we had to slow down so as not to startle or hit them as they grazed a few feet from the asphalt). We took a brief detour off the main road to see the Grand Canyon of the Yellowstone River, and grand it was! 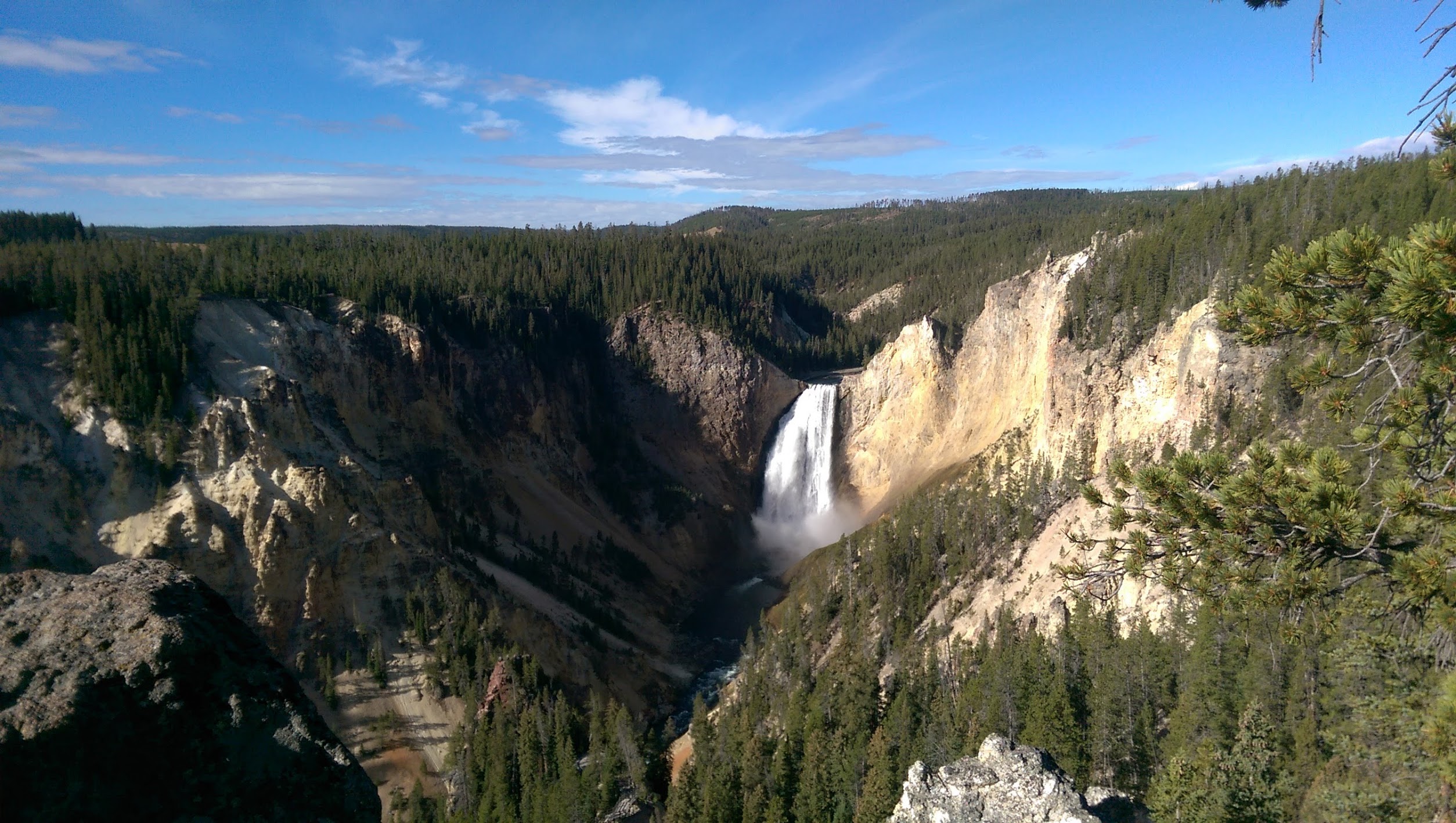 We also froze to our very cores, with the early morning cool still hanging in the air and us forcing it through our clothes at 45mph. But it was for naught.

We had done our research: Tower Falls campground filled up at 12:30 yesterday and 16:30 the day before. We arrived there at 10:30 after riding through the frigid air for two hours, and it was already full. How unfair! The campground host was kind enough to give us the number for making reservations at other campgrounds (most of the first-come first-served locations were also already full), but everything reservable within our range was also full. So much for camping another night in Yellowstone.

Resigned to our fate, we drank a warm drink each to give our bodies a bit of a break from heating themselves. We took a brief walk over to see Tower Falls (so named for the towers of pumice beside them), then mounted up once more. On our ride we saw big horn sheep and pronghorns, completing our animal-viewing goals!

We got to do our one hike in Yellowstone, along the Yellowstone River. It was a 3 mile trail along some bluffs overlooking the river below, with plains on the other side where animals plainly grazed.

We noted some of the animal signs we saw (mainly scat) for finishing up our Junior Ranger activity book later. We didn’t see anything larger than a bluebird, which was ok (we had seen some bear scat in our Junior Ranger research, and definitely did not want to meet one of those). The field was teeming with grasshoppers, and out here they all have vibrant colors. My favorite was a variety that had crimson wings.

After soaking in the vistas, we caught up with another older couple who had hiked the trail. They happened to be going back to the same parking lot, and we chatted with them on the way back. They were a delightful pair from New Mexico who told us about their straw bale house and who also bemoaned the crush of Boomers taking up all the camping spaces and filling the parks. This is the National Park Service’s centennial, and the attendance record for Yellowstone has already been broken: as of August of this year they had already had 3.8 million visitors, and they’re expecting to see 4.5 million before the year is out. It was a shock for us after the other parks we’ve visited, where it’s been easy enough to get camping space.

Anyway, we got back, loaded up, and rolled out. Our only option at this point was to leave the park: in the process of this, we crossed into our fifth state: Montana! The sign in the park was somewhat less ceremonious than most of the ones we’ve seen on regular highways, but so it goes. 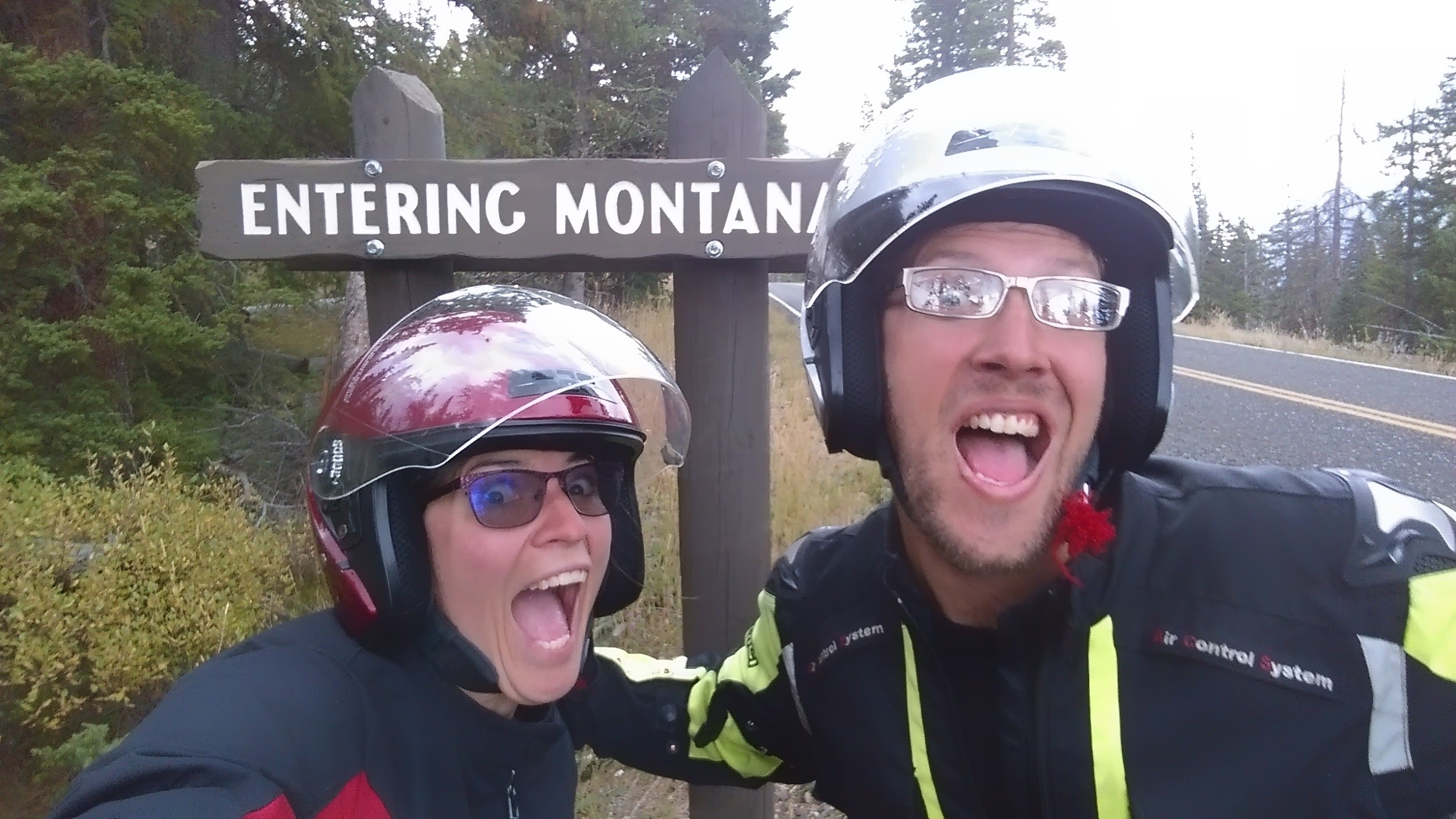 All the campgrounds nearby on our map in Montana are marked as “hard-sided units only, no tents”. We were upset about this up until the point where we checked into a motel and saw a bunch of warnings about recent bear attacks, including bears prying open doors to campers and walking around in broad daylight in diner parking lots. While it seems that, in the park, the rangers have a good handle on when a particular bear becomes violent and needs to be destroyed, out here no one really takes care of it, and the creatures run amok. Perhaps it’s best that we’re in a motel instead of camping tonight…

We met yet another Boomer couple bemoaning Boomers. They also expressed surprise that our scooter could have made it here from California. (“You took that over those mountains??”) Fielding those questions is always fun. Also, we finally filled out the remainder of our Junior Ranger booklet from Yellowstone. Too bad we’ll never get to turn it in…

Filled with a delicious Rocky Mountain trout dinner from across the street, we’re ready to settle down for snooze. Hopefully no bears pry open the door of our motel room.