Two roads diverge. Can
they rejoin? The hearts of men
may see only rifts.

Last night was very irksome, with a pair of drunken Canadians crashing into the park after midnight and loudly discussing how much beer they’d drunk and how they weren’t going to bother to pay for their camping. Some of their (noisy) setup sounds were punctuated by more liquid, gutteral noises, that we tried not to dwell on.

In any case, we awoke, cooked breakfast (oatmeal with sunflower seeds and apples, seasoned with dried orange peel and cinnamon!), and headed out of quaint Mitchell.

Our first stop was at the Sheep Rock unit of John Day National Monument. 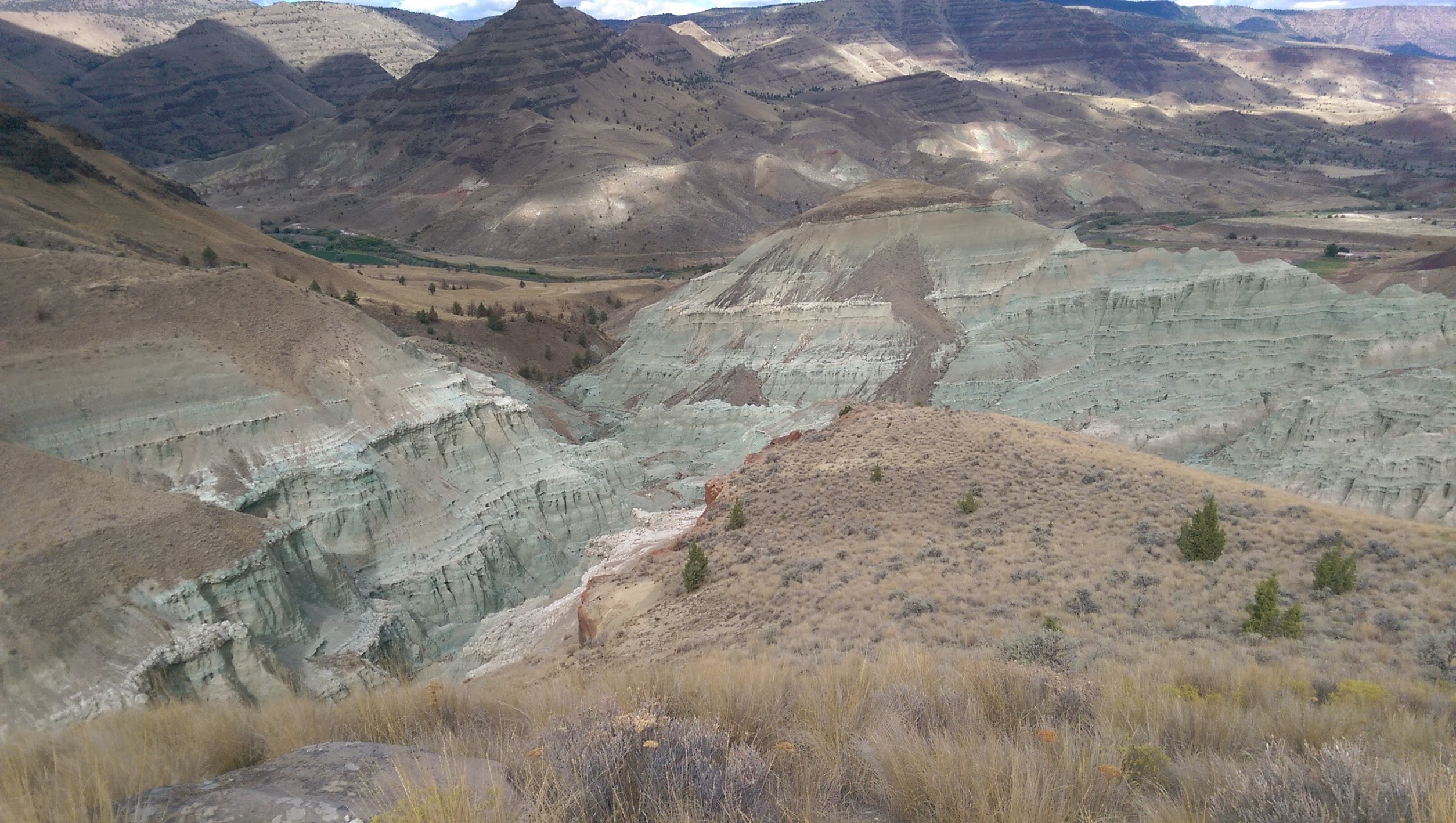 This area is renowned for its fabulous red and green rocks, which are fossil beds. But this isn’t just because the rocks are pretty: over time there have been many volcanic eruptions here that have buried the entire area. These eruptions are easy to accurately date, and because there are so many fossils sandwiched between the dateable layers, there’s lots of information here for paleontologists to get excited about! In the Paleontology Center, we got to see fossils of leaves, nuts, and flowers, as well as bear-dogs, mammoths, and mouse-deer.

Our hike around the Blue Basin Overlook trail was magnificent, with stunning views of the landscape. It’s strange to look at the line of the monument itself, as not all of the green and red rocks actually belong to the government. How could a single person own something as majestic as this?

We wrapped up our visit by purchasing a new sticker for The Emperor.

On the way out, the hills themselves seemed to be singing about life on the range, the freedom of the outdoors, and the hugeness of the sky. It was an incredibly pleasant ride to the city of Dayville, where we had an equally pleasant lunch at the café (consisting of a fried oyster sandwich and a Philly cheesesteak sandwich). The café also had a map of where everyone who’d eaten there had come from, which Evan added our names to.

While eating, I happened to overhear the waitress talking with the patron sitting behind us. He was from Portland. It was a conversation about the “Town” and the “Country”, where she insisted that both needed each other and that it was all a matter of preference where a person chose to live. The man seemed to think that the Town was just better, and that nothing could change that. I chewed over that for the rest of the day; it was a day of dichotomies.

We had our own interesting conversation with the waitress, who asked where we were from, etc., etc. We told her we were moving from California to Toronto, and she asked why. When we explained that part of it is because of our industry, she pried further. “What industry are we in?”

“Why do you want to leave California because of that?”

“Well, lots of people in that area do computers, and they are always stepping on each others’ toes, and sometimes they act really nasty about their work.”

“Ah, we have that in the country, too, but it’s usually about cows or hay. We call that a ‘clusterfuck’.”

I laughed a bit at the time, but it was an enlightening conversation. I hadn’t considered the fact that of course we’re not the first people to feel this way, and that we’re just lucky to be able to change our situation. Getting in a fight with other cattle ranchers could be really frustrating, because cattle are a lot harder to move than a laptop. Something else to chew over.

We made it to the city of John Day, where we toured the Kam Wah Chung & Co. building. This was a piece of John Day history that was gifted to the city in the 50s, forgotten about, almost bulldozed, and finally made into a park in the 70s. It was the center of Chinese culture during the time including and after the gold rush days: when (overwhelmingly male) immigrants were escaping wars and famine in China by coming to the US, where they could get jobs and dream of making enough money to either bring their family over to join them, or simply to finally get back to China again once things had quieted down over there.

As a brief tour into US History, this was pretty complicated. Chinese men certainly got jobs, mainly as laborers on the railroads and in other service work supporting the mining and logging industries. However, US people being such as they are, these folks were paid about half wages, and they were rather disliked and thus forced into smaller encampments in undesirable parts of town (in John Day, they were given a plot of land in a flood zone). As anti-Chinese sentiment rose, these immigrants were denied Citizenship, and finally with the Chinese Exclusion Act passed in 1882 any Chinese who couldn’t prove that they were working as some kind of skilled person (i.e., not a laborer) was sent back to China.

During this tumultuous time, John Day hosted around 3,000 Chinese immigrants. This qualified it as the third-largest Chinatown in the US. Amazing, considering John Day’s current population is only about 1,700.

But the two immigrants whose lives are preserved in the Kam Wah Chung & Co. building were not deported. They worked as a businessman (Lung On) and a doctor (“Doc” Ing Hay). The building itself was a place where Chinese could congregate after their various labors, drink, smoke, buy foodstuffs from home, get diagnosed with problems, buy boarding if desired, and just forget for a moment how ostracized they were. The physical space had to be protected: it was common for cowboys to get drunk and come through Chinatown shooting, so the windows were barred with iron and the door was plated with tin (unfortunately, tin doesn’t always stop bullets… we saw a few holes all the way through the plate). It was the only permanent physical building in the Chinatown, with a stone foundation rather than all wood. 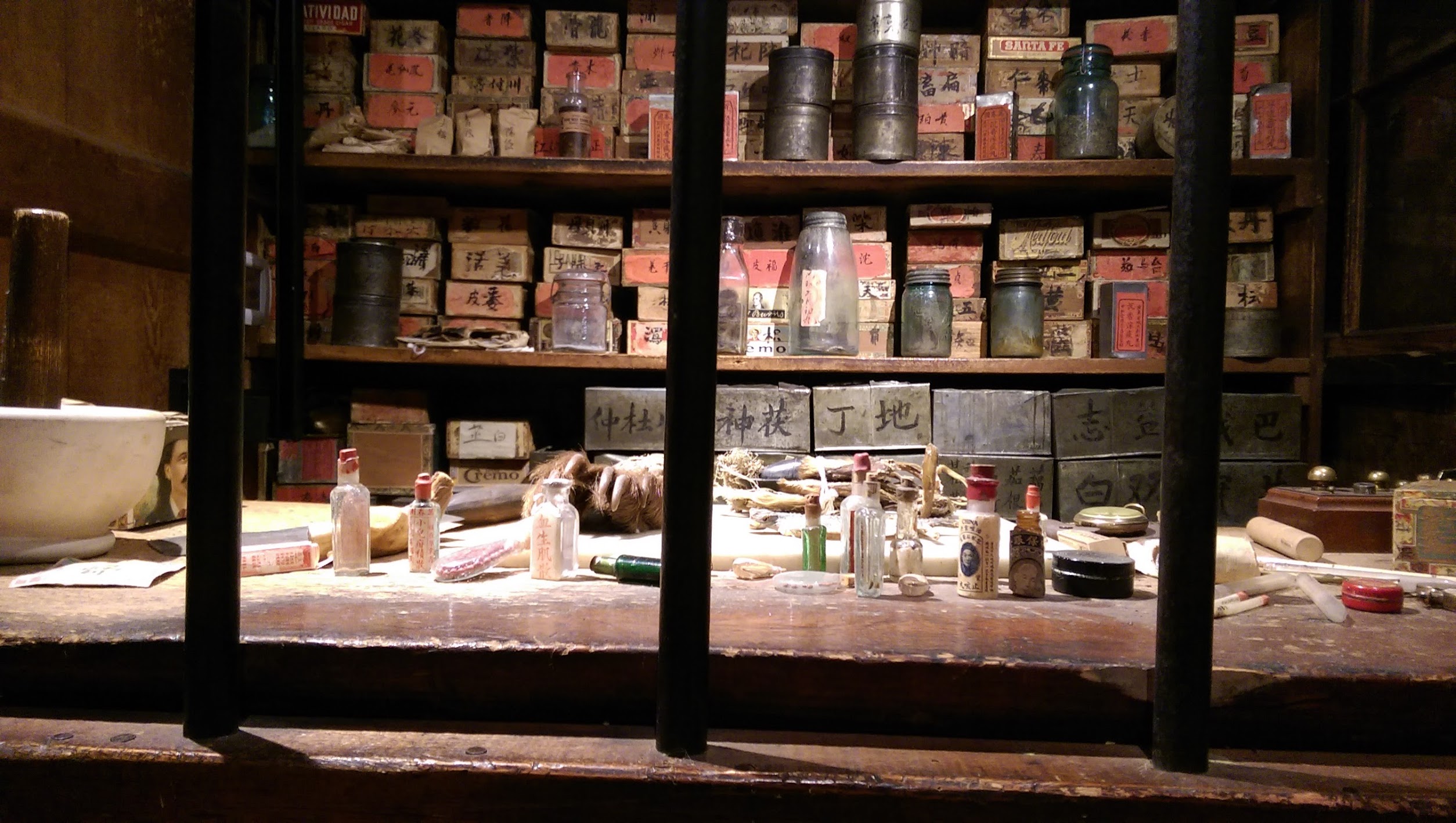 Anyway, this is getting pretty long-winded, so I’ll wrap up by saying that the building was deeded to the city after the two men had both died, and essentially since they forgot about it for 20 years it was preserved in the same condition as it was when they had passed away. Even the fruit on the altars inside was original. (This is all modulo some minor looting by area teenagers, who had stolen the firecrackers, guns, cleavers, gramophone, and alcohol inside. Apparently some of those items come back sometimes, as people who stole those things have grown old and feel a bit remorseful.) It’s a pretty cool museum, and I haven’t seen a park similar to it before. It served as an interesting local chronicle of a time not so long ago, and talked about how these two men had become accepted in society (and in some ways not, though one of them did end up being invited to join the Masons!), and had a lot of ties to its place (including a chest full of un-cashed checks written by local people who went to see Doc Hay; he at some point said that “I don’t need the money; they need the money.” The checks were photocopied into an album which invited locals to try to find their family name among the check writers.). We were impressed.

More dichotomies: wilderness versus open range. We saw a series of signs advocating things like “NO Monument without a Vote of Congress!” and “Preserve Wildlife Habitat AND Protect Open Land Rights!”. Lots of the industry around here is ranching, and there seems to be some tension between folks trying to preserve the (incredible) natural beauty of the area and folks trying to use the land to produce food. I’m not certain what the proposed Monument is, but suffice to say that it will probably take land out of the hands of ranchers.

As we neared our destination (Bates State Park), we also thought more about this. We took a detour through the woods to see the old rail bed and machinery of a line that had been laid around the turn of the century to support the logging industry, then scrapped not too long later as the local one-resource towns started drying up. Bates, in fact, was one of those towns, which was reliant totally on logging. Now the site of the town is a state park… interesting. The railroad did talk about a neat innovation in its design: switchbacks! The mountain’s slope was too steep to climb in the usual way, so the train actually had switchbacks as it went up or down. 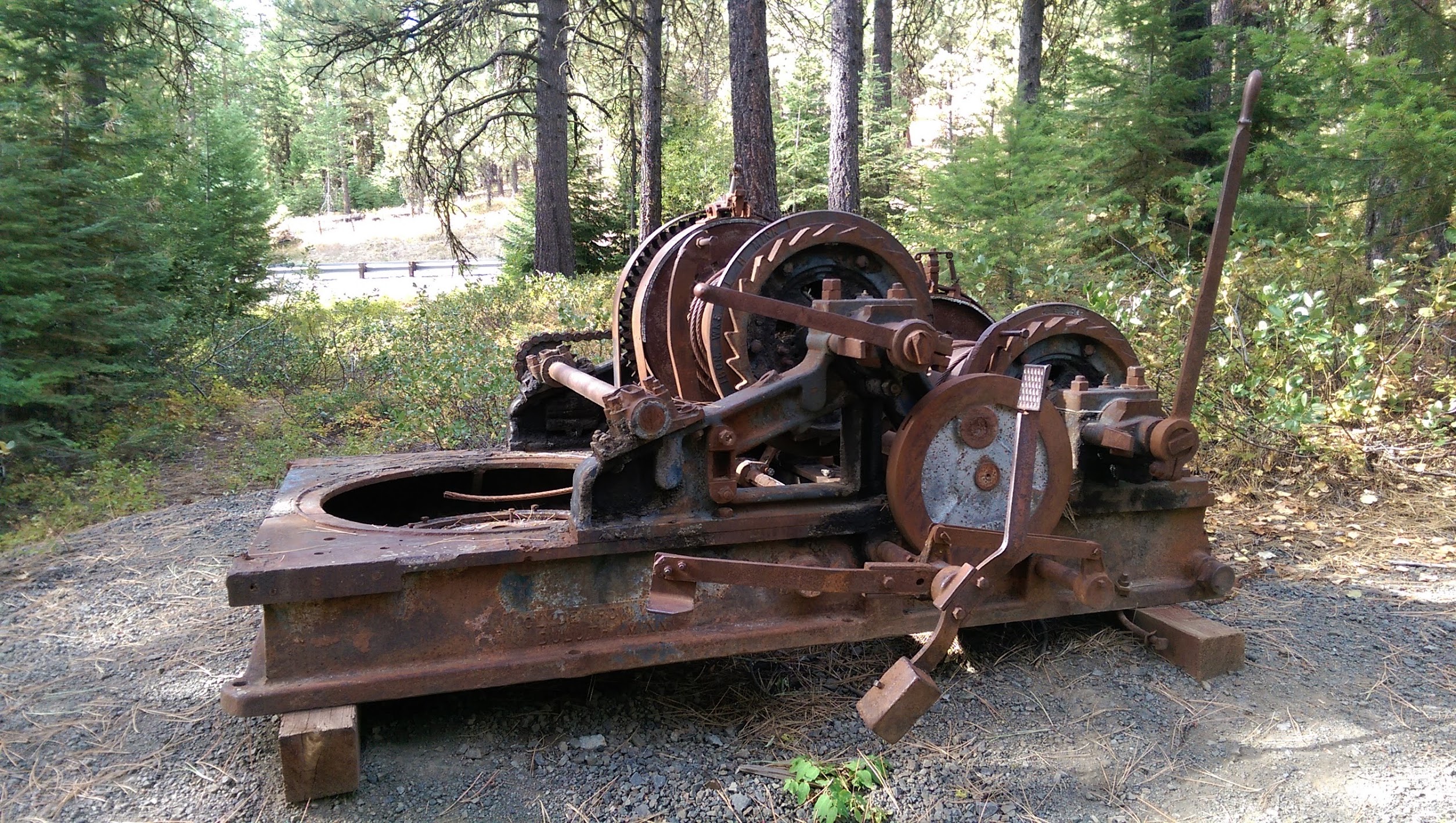 P.S. no, if you have seen Psycho, it is not that Bates.