Day 5: Hiouchi, CA to Valley of the Rogue State Park, OR

Another day, a new state! This day’s travel takes us from the familiar coasts of California inland across the Coastal Range to Oregon, where we find alpacas, blistering heat, and cool caves.

To start the day off, we take full advantage of the kitchen at the RV Park in Hiouchi one last time to cook up a breakfast of eggs and udon… 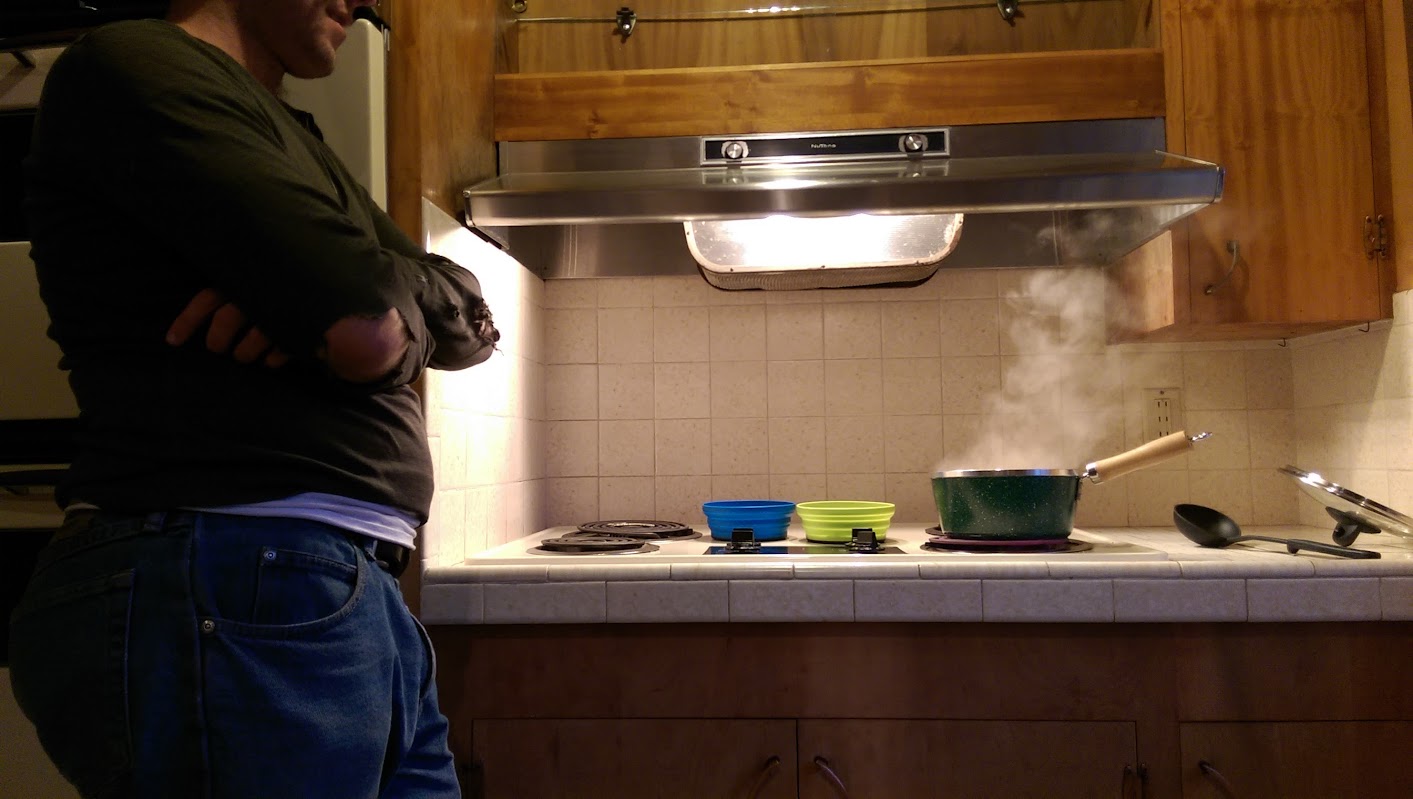 …before heading up into the California Coast Ranges towards the state border along the beautifully scenic 199, roughly following the Smith River for some time. The cool, foggy redwoods give way to more and more arid landscapes - not drastically so for the first bit, but clearly enough that we can sense the changing climate around us as we ride.

Our arrival in Oregon is, much to Valkyrie’s chagrin, somewhat anticlimactic: 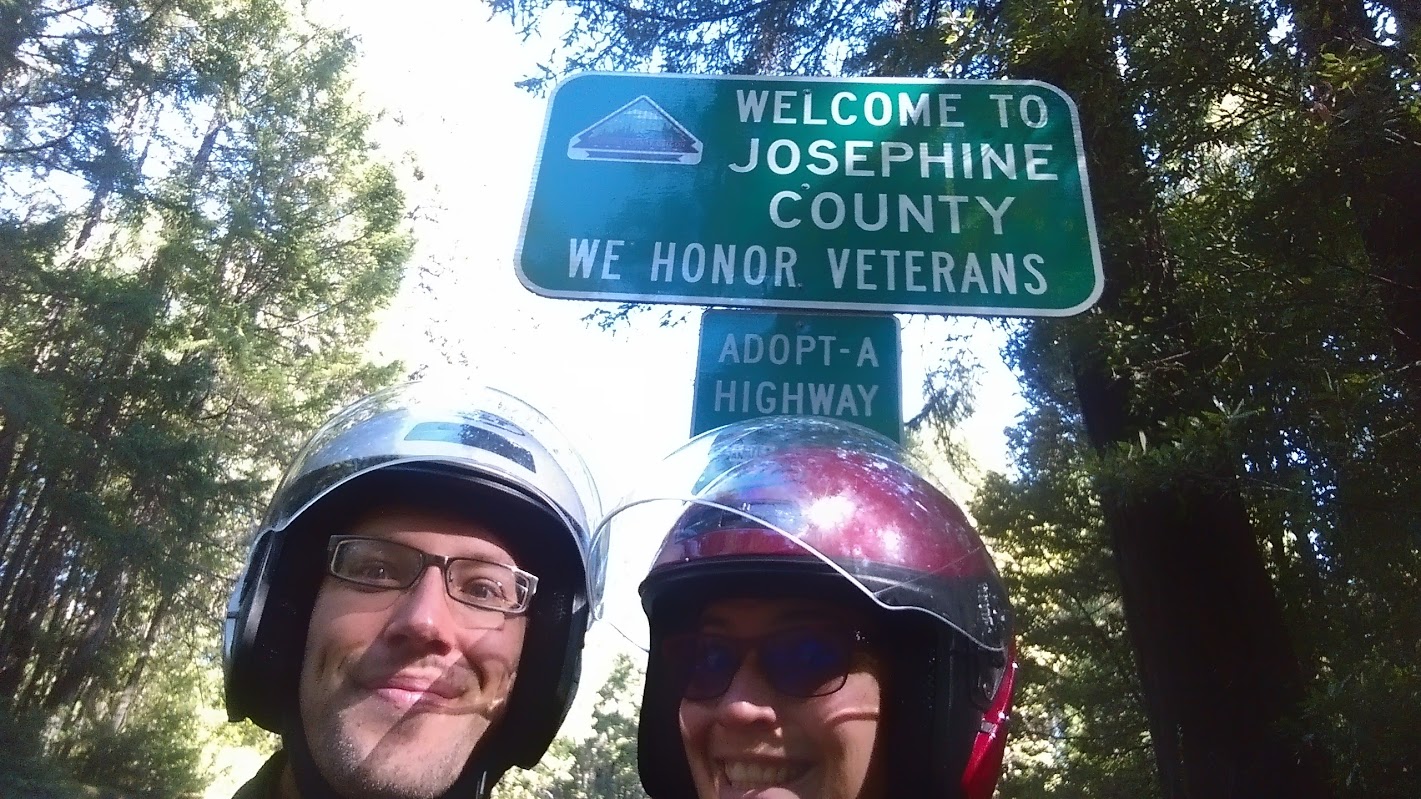 Not to worry - there’s an official state border crossing sign just a bit further on: 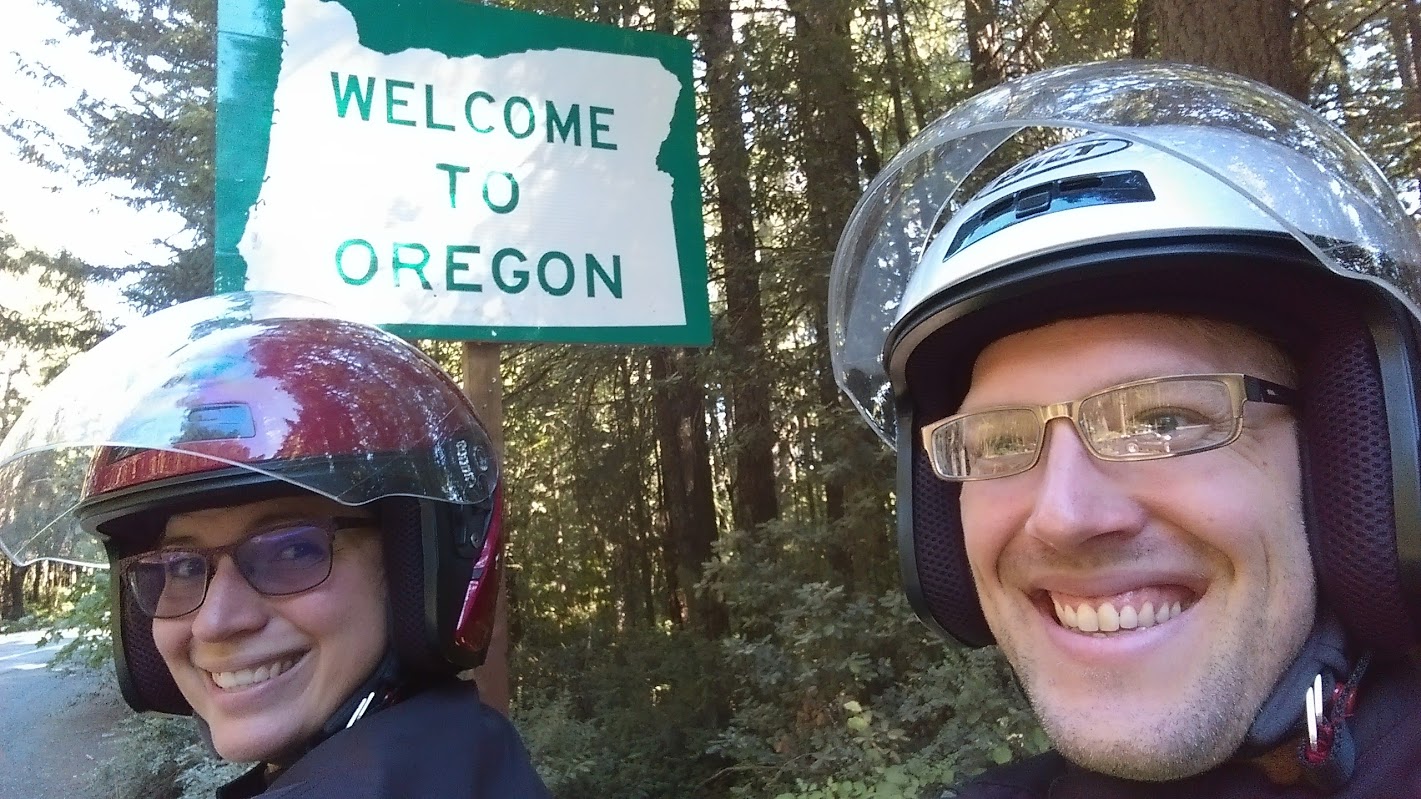 Before long, we’re facing down flat prairie and blazing sun as we roll into Cave Junction. Lest you think Oregon’s hippies and hipsters are confined only to Portland and other such urban enclaves, think again, for this otherwise unassuming town boasts a coffee / juice bar that wouldn’t look out of place in the SF Bay Area. Here, for instance, is the greens-and-bee-pollen decoction we chanced: 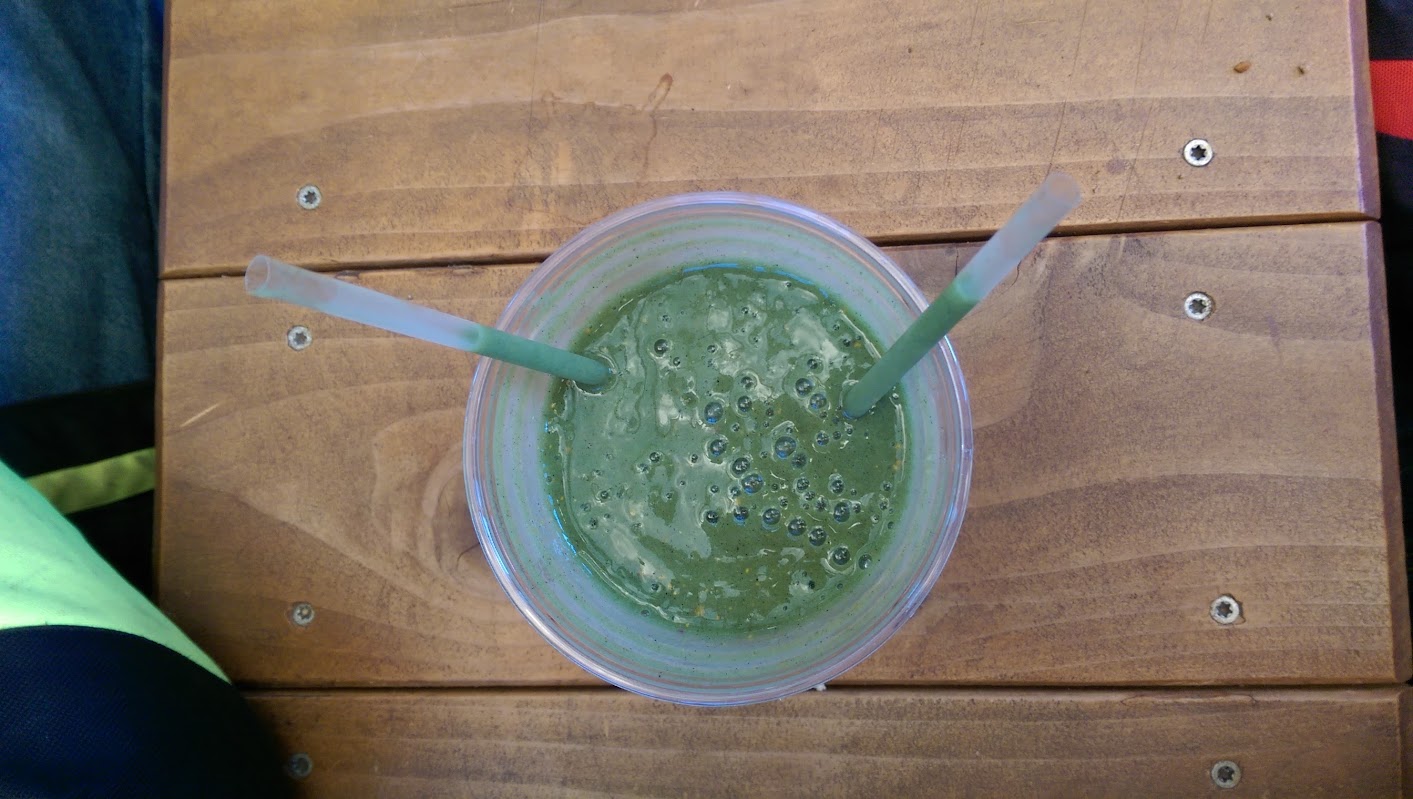 I don’t know that it gave us any superhuman powers, but it was tasty!

We resupply for lunch at a nearby supermarket, where a grocer standing under a tent of vegetables and fruits marked down to bargain prices cheerfully informs us that, by state law, he can’t actually sell us the food on display outside. (Apparently they have an arrangement with the local food bank, which accepts the sun-weathered produce at day’s end. Good to know that at least it’s not going to waste…)

Then it’s up towards the Oregon Caves National Monument, which we’d never heard of before looking at our map. What’s a 20-mile detour and then back again when you’re taking it slow anyways? That’s right: a great idea. The ride up to the monument is flat at first, but quickly becomes more exciting once we start climbing into the hills - not to mention the climbing temperature, which is edging solidly into the 90s and slowly baking us in our motorcycle jackets.

Our tour down into the eponymous caves is led by an amusingly sassy park ranger who cracks terrible puns at any and all opportunity: 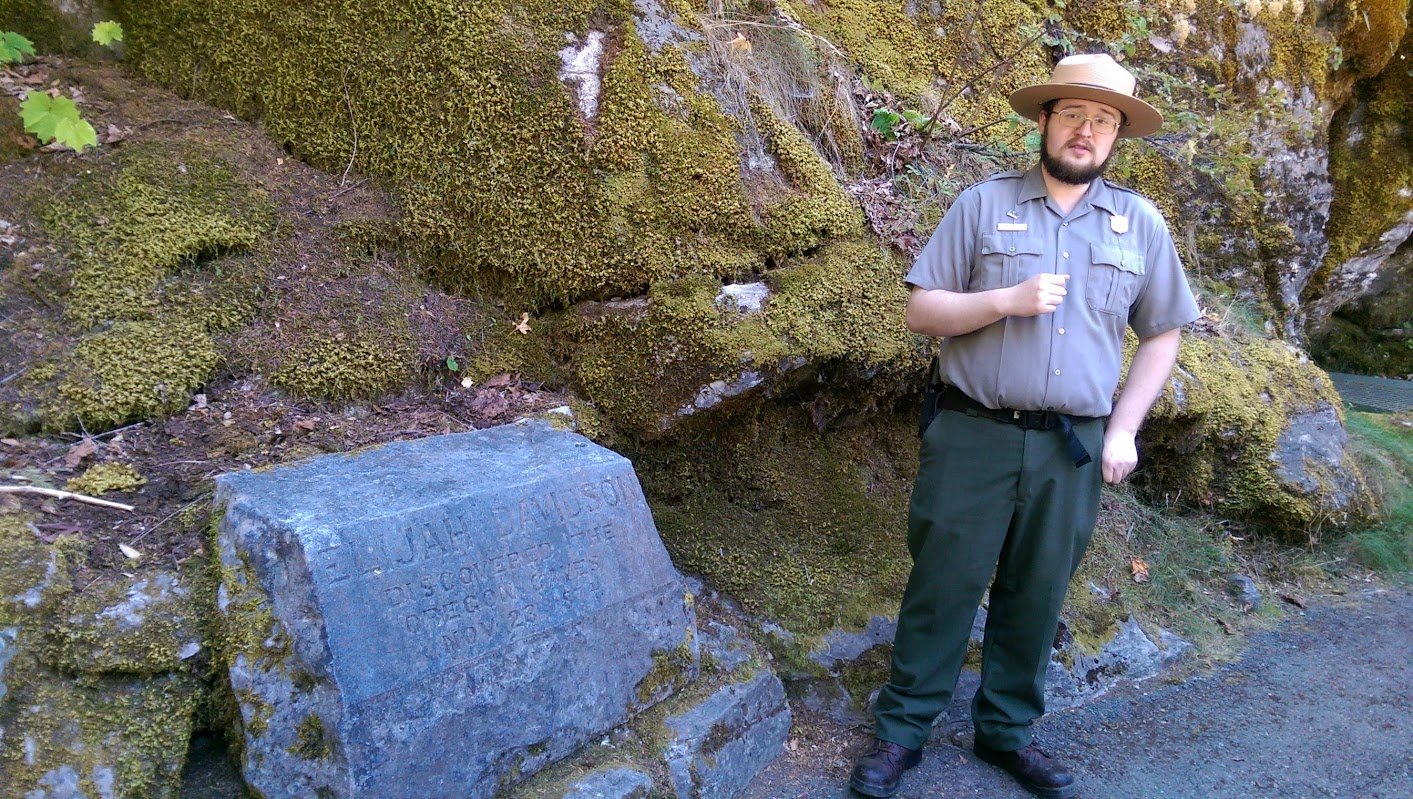 The caves themselves are full of really awesome formations, like these “bananas”: 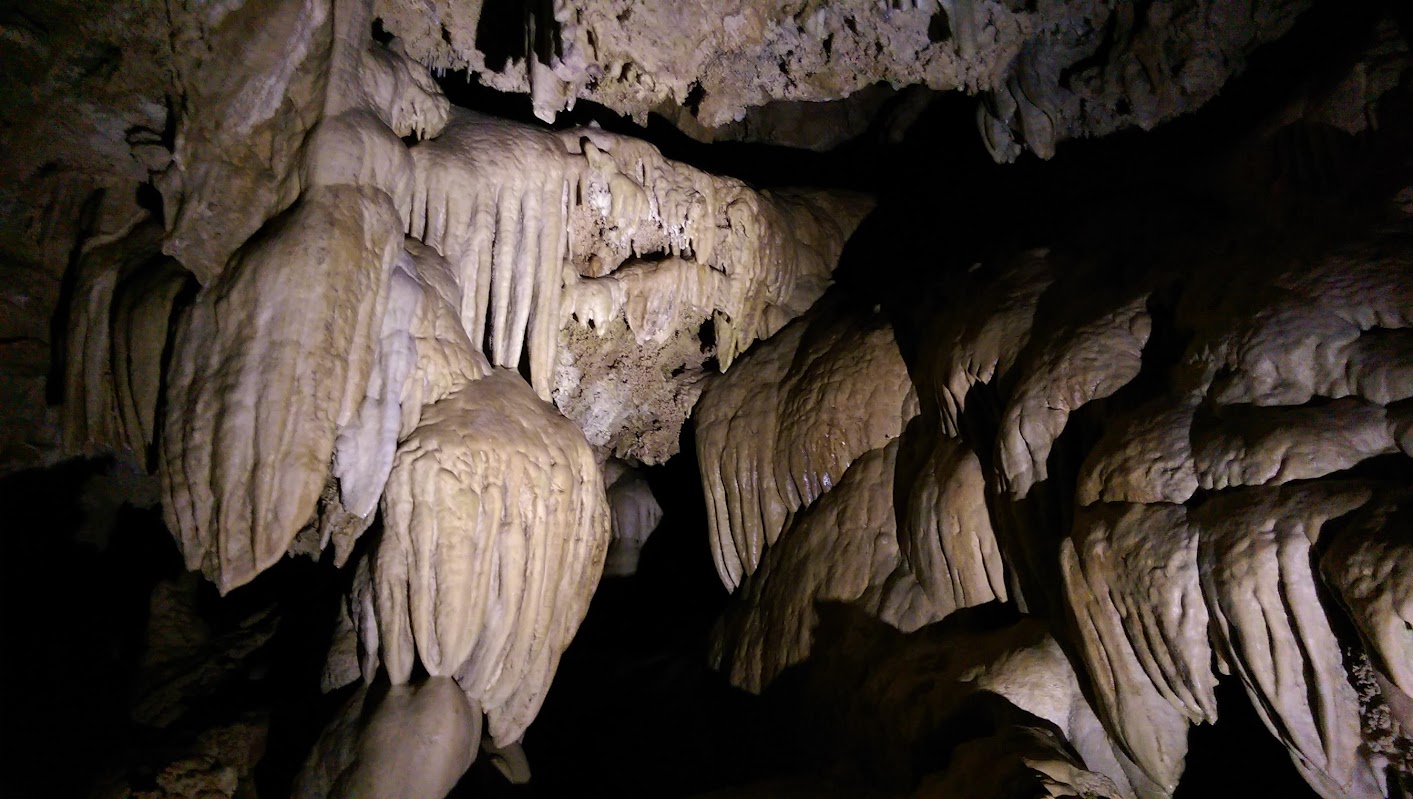 There’s also the usual stalactites and stalagmites, pit domes, shields, drapes, soda straws, chandeliers, etc. Halfway through the tour, a woman in a group ahead of us has to receive first aid (turns out to be low blood sugar, which sucks but is thankfully not as serious as it could be).

We learn that people used to have a lot more fun down in these caves. Back in the day, there was no well-maintained route for visitors to follow, so they would instead navigate the cave with guide lines and ladders and short rappels and wading and squeezing. There were concerts and dances held in the caves, and some believe it functioned as a speakeasy during Prohibition. There were also the Oregon Cavemen, a group of local businessmen that were equal parts tourism booster group and kidnapping ring. Lest we all forget the contributions these fine folk made to the tourist profile of the area, they’ve been immortalized in statue form down by the Tourism Information office in Grants Pass: 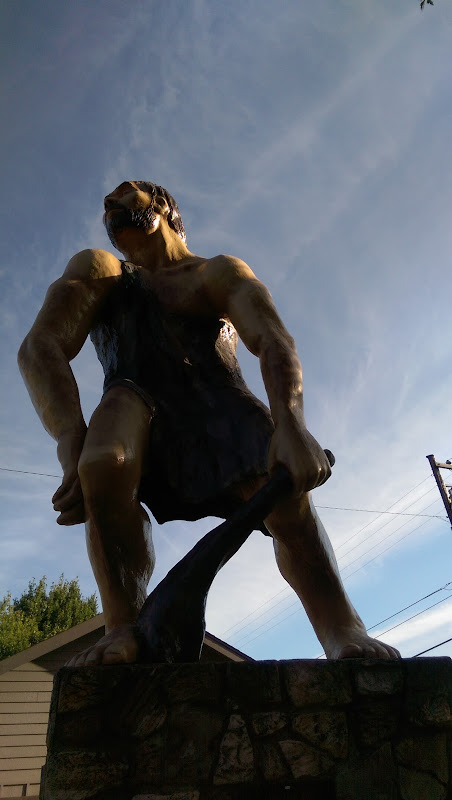 We spend some time after our cave tour in Cave Junction, waiting out the heat of the day with landjaeger made from alpaca. These are clearly some happy-meat landjaeger, since they come from the alpacas we saw not two miles up the road on our way into town: 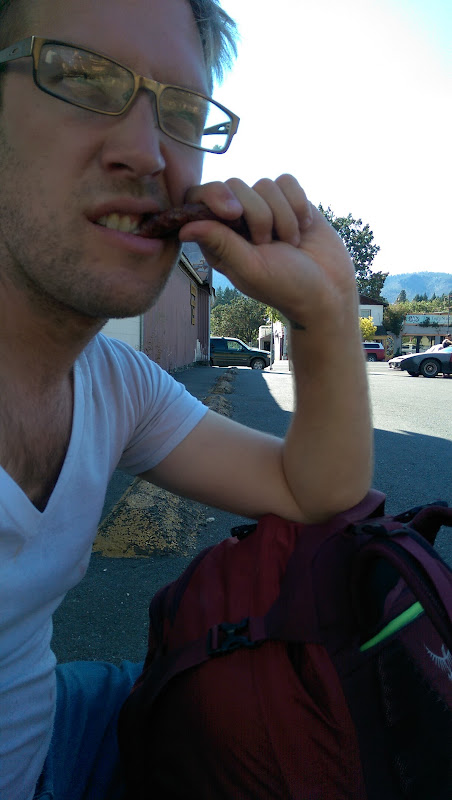 Turns out we didn’t wait long enough, though, for it continues to heat up as we descend into Grants Pass, peaking at a sweltering 98 degrees. We wait a bit longer in Grants Pass, then head out along the Rogue River towards the Valley of the Rogue State Park. As State Parks go camping-wise, this one’s OK; it’s unfortunately right next to the freeway, but it does have a couple of accesses down to the Rogue itself. Tacos and local mead make a fine riverside picnic before we head off to sleep, ready for the day ahead.

Will it continue to heat up? We’re not sure, but we’re hoping it doesn’t - we could switch to siesta schedule, sure, but that would mean riding before dawn and after dusk - and low-visibility driving seems like a poor idea on our high-powered scooter.