“Say! Where are you from?”
Staring, aghast in wonder,
We don’t really know.

We stretched out the cricks in our back this morning, something we had totally forgotten from the bike trip, and realized we are getting too old to camp like this. We brainstormed what we can do to feel a little less decrepit; maybe when we get to Eureka we’ll invest in some sleeping pads, after all.

After our gruff, old-person complaining, we were pleased to see that no critters had gotten into our foodstuffs in the cupboard. We happily dined on our last (for a long time) Cheeseboard scones: corn and cherry. Though they were two days old at this point, they were delightful, especially with a bit of cheese. However, we realized two things at this point:

When looked at together, these problems together imply that we should put effort into making hot breakfasts for ourselves in the morning. This will help us get a later start so that the air warms up a bit, and it should also be more filling.

A chilly, foggy ride up the coast brought us through enchanted seaside forests and up to Gualala, a small town with a handful of restaurants, a grocery store, and a couple gas stations. We grabbed a warm drink at the supermarket, where we also invested in a scrubbing pad and some dish soap. We also chatted with a group of touring bicyclists heading from Vancouver back down to Oakland with all their bicycle-powered speaker gear loaded up. Evidently, the amps weigh in at about 40lbs each: as much as we each carried in total on our bike trip. D: In any case, we leaned on the bbq stand out front of the grocery store to drink our warm drinks. 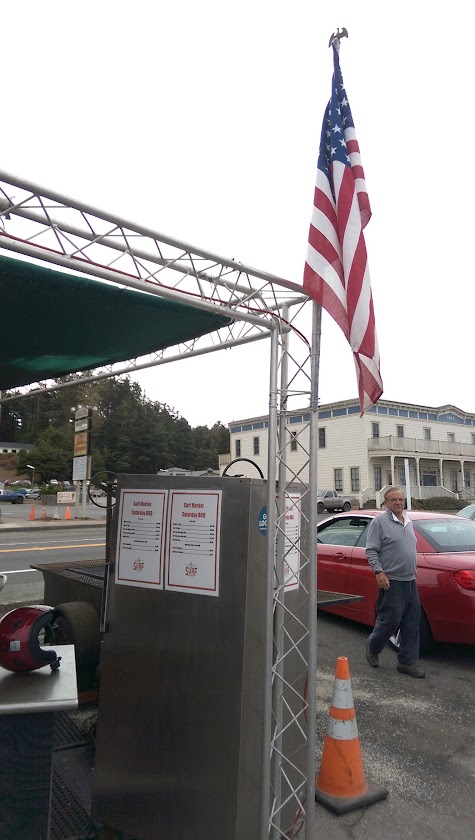 A cheerful old man accosted us when we got gas, telling us about how he used to ride a scooter around in the 50s, as well as random anecdotes about how his dad is 102 and regrets retiring too early. Another gentleman walked up to us before we pulled away and laughingly described how he used to ride motorbikes when he was young, but how his bike was consistently just a bit faster than he was (“and that’s why I walk funny now!”). Nor-Cal is awesome.

Another brisk ride up the 1 brought us past a few state parks, which we had free entry to on account of staying in a park last night. We checked out Van Damme State Park and took a brief hike, sadly missing its pygmy forest. We also dropped in to Russian Gulch State Park to enjoy a walk around the Devil’s Stewpot, a sinkhole into the ocean. Finally, we found ourselves in Fort Bragg, where we grabbed some tasty, tasty lunch and dinner fixins. The helpful lady at the smoking/butcher shop (their sign claimed that they’ll smoke anything) helped us get some smoked peppered cheddar and some amazing smoked lamb sausages with ginger, mint, and more, then gave us directions to a great beachfront picnic spot and a campground further up the road. We collected groceries for Evan’s cooking night: beans, a green pepper, cilantro, carrots, and onions. Together with the remaining pasta from last night, this would create a tasty and filling pasta e fagioli.

We saw more cyclists, enjoyed our beach picnic, and had our first hobo moment. We set out our tent fly to dry while we ate lunch, draping it over The Emperor. 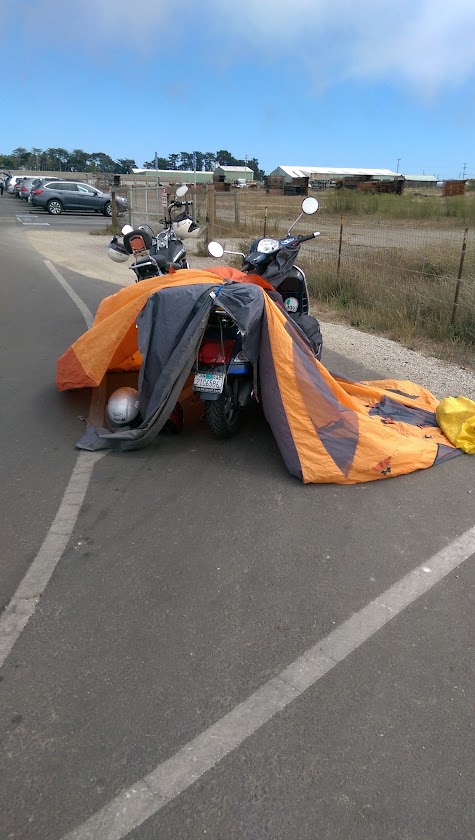 Another short and scenic ride brought us up past West Port, where we settled in to our campsite. The friendly desk woman took a shine to us and gave us a deal on a tent site with the Vespa: the site was right up front with easy access to showers, dish sink, store, and electrical outlets. We pitched our tent and took a brief look around, admiring the summer-long RV culture. We paused to examine a flipflop wall, when its caretaker shuffled over and explained to us that it grew out of a game between all the children who stay in the park over summer, finding singleton flipflops washed up on the beach. 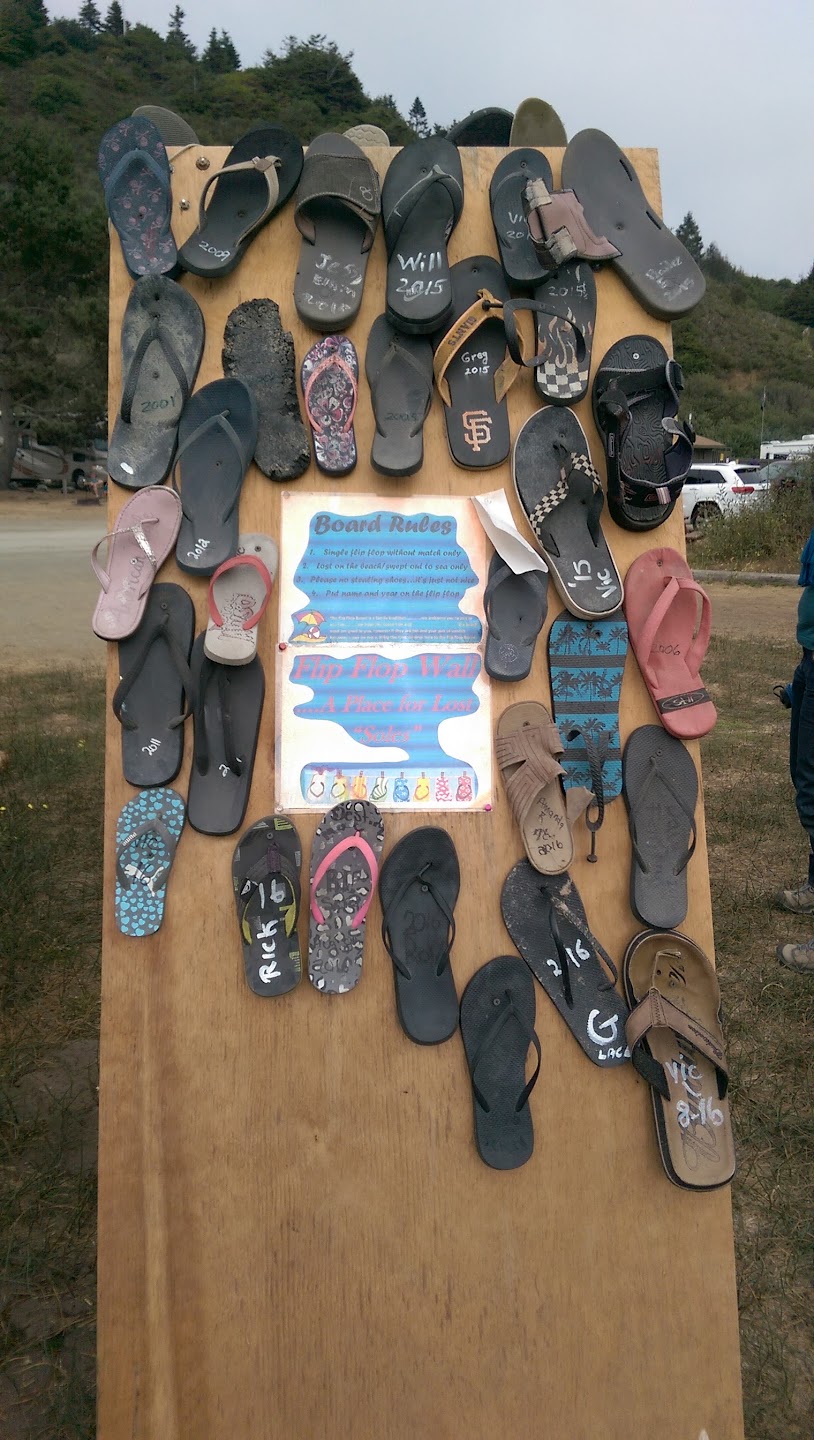 After a hot shower, a hot meal, some cold champagne (!), and a neon-dyed campfire, we’re ready to conk out for the night. :)