One last breakfast in Oaktown. We sit on pieces of cardboard on the bare floor, sharing scones and buns and little cheese ends from Cheeseboard with Craig.

We pack the bike up, saying our final farewells… 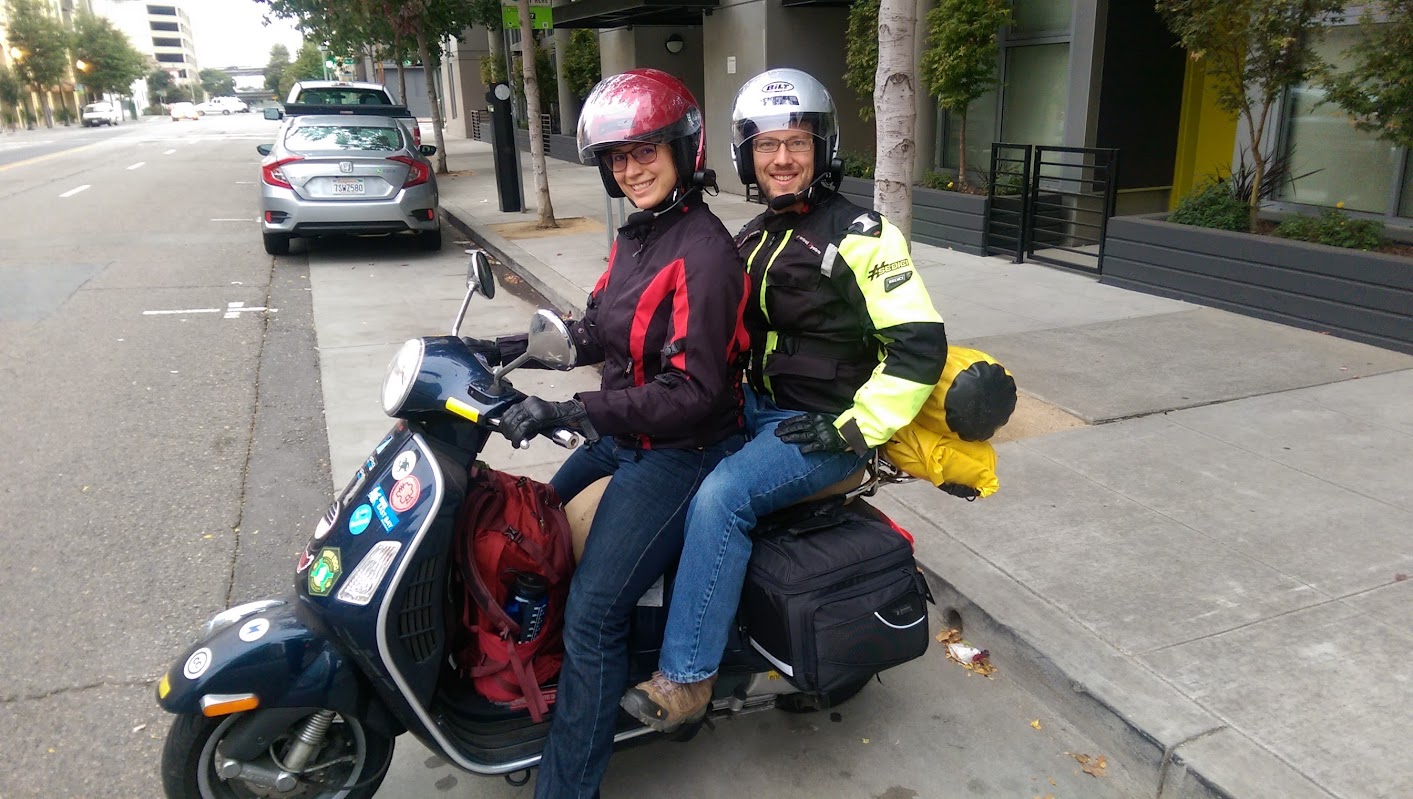 …and ride off into the foggy rush-hour traffic of the Bay Bridge. The traffic isn’t a nuisance, we decide - just a roundabout way of getting a little extra time to appreciate the SF skyline before we leave our old home behind.

A quick stop in the Marina for a peek at the Wave Organ, built as homage to the Exploratorium and memorial to Frank Oppenheimer whose vision brought that wonderful museum into being: 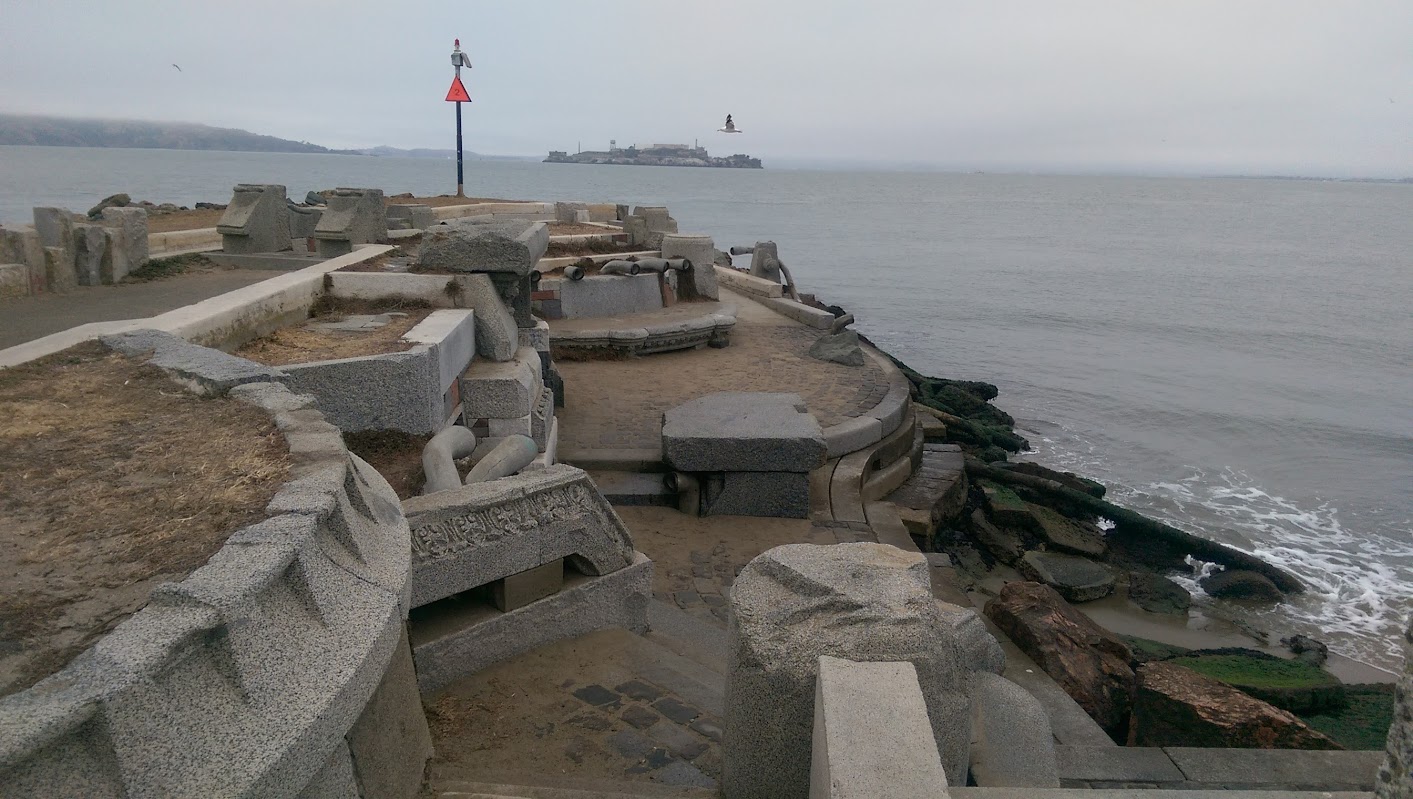 This actually reads “cool story, bro” but looks like “cod story, bro” when viewed from the right angle. We take it as a sign that, yeah, it’s time to leave: 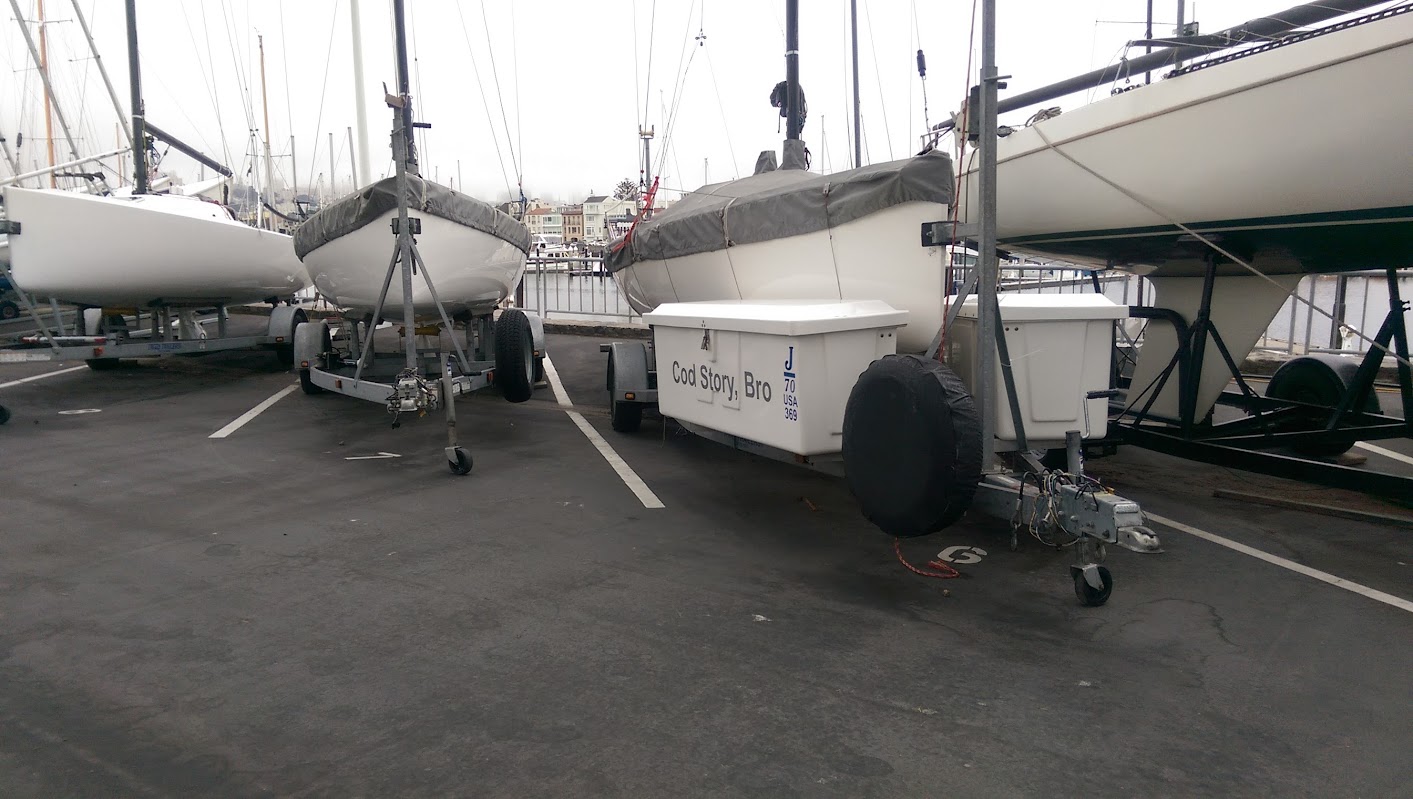 Then it’s up over the Golden Gate, through the Robin Williams Rainbow Tunnel, and off down Highway 1 through the persistent fog of the Pacific coast marine layer. We pause for a delicious lunch in Point Reyes Station, and are soon joined by three yellowjackets who want in on the smoked salmon action.

Familiar sights everywhere, this time with the bittersweet tinge of departure: the turnoff to Samuel P. Taylor, the oyster shack where we had Marin Secret Breakfast (oysters and beer) at 9am that one time - hey, all the locals were doing it - the put-in for our bioluminescent kayaking jaunt a couple of years back, coastlines and windy roads and fog spatterings on our helmet visors, all experienced one last time.

We come across a trio of Harleys (OK, two Harleys and a Honda) further down the road. 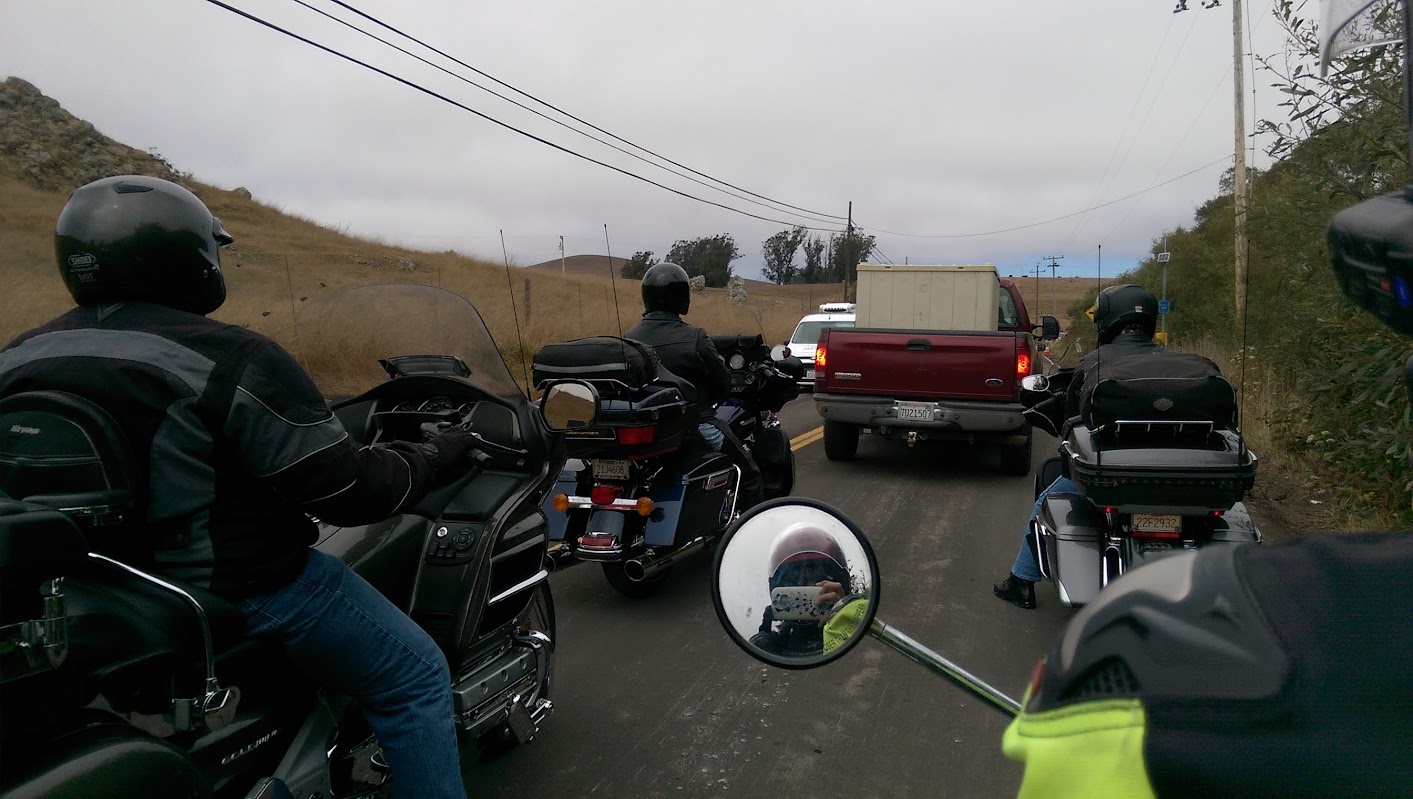 The owners turn out to be friendly, as we find while waiting beside them for a road maintenance light; they’re on a ride up to Fort Bragg, then across to some place out near Reno for the requisite gambling and booze. And why not? One of them has a T-shirt that he gets us to sign in silver Sharpie before we part ways - there’s a bunch of signatures on there, including one from a Ducati driver that he chased down at great length (and probably danger) a while back. We are, he proclaims, the First Vespa he’s seen making such a ride, and the rightful recipients of the Blue Butt award - and we have to admit that the bike-cum-scooter does look damn bizarre with saddlebags and a fully loaded rear rack.

After Bodega Bay, the coast is less familiar, but its winding and turning feels no less so. 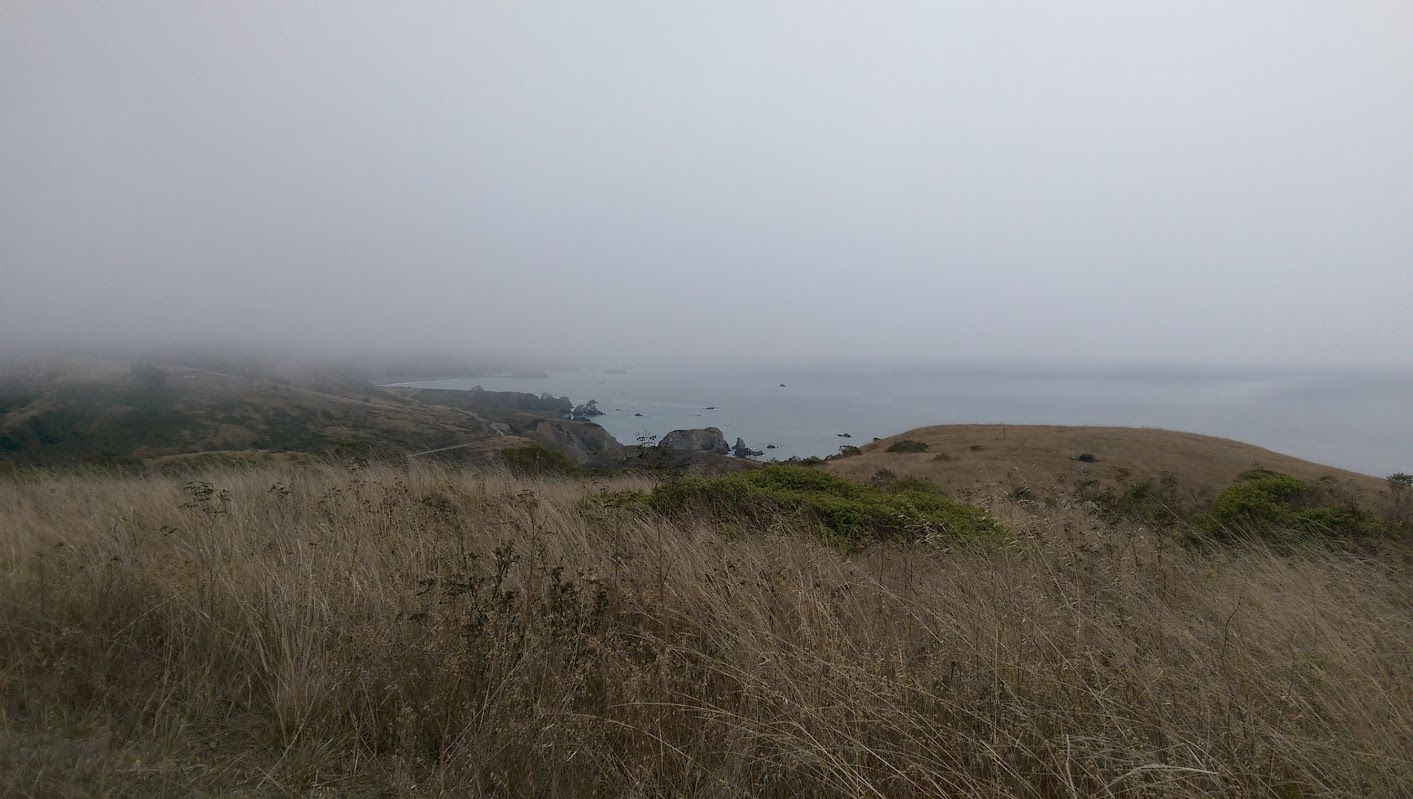 A few dozen more miles of twisty road and fog brings us to Salt Point. We make camp, then hike down to the beach and back up again. 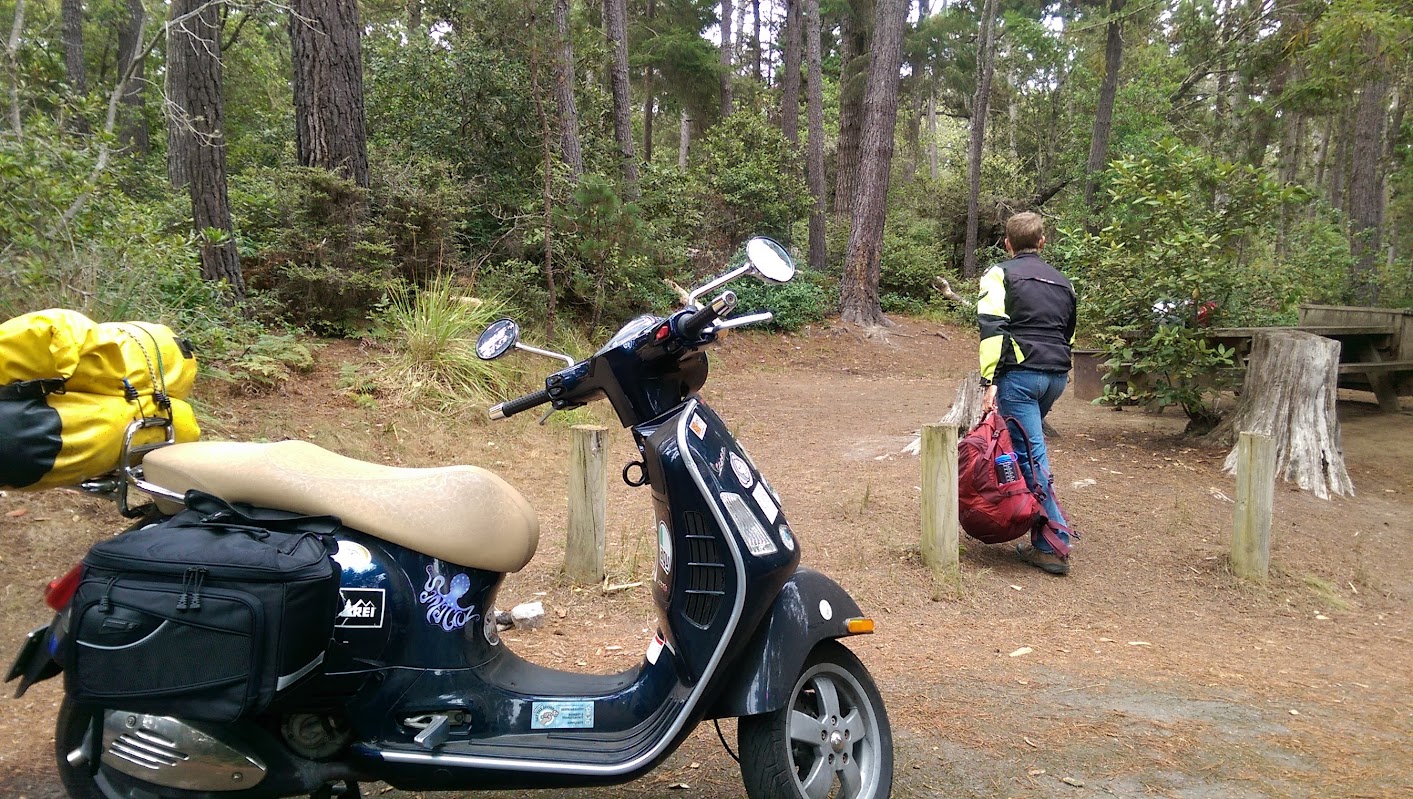 First night in the tent (on this trip, at least; we’ve slept in the blessed thing well on a couple hundred times now, and it’s still holding up great except for a distinct patina of bird shit on the fly). First night of The Trip, the voyage that will take us from our old lives in the San Francisco Bay Area to our new ones in Toronto as Serious Entrepreneurs. I’m not sure we’ve really wrapped our heads around that one yet, but that’s fine; we’ve got time, and that’s sort of the point.